I Care If You Listen’s 5 Questions to Francisco Núñez

By Arlene and Larry Dunn

MacArthur Fellow Francisco Núñez founded the Young People’s Chorus of New York City in 1988 with a two-fold mission of artistic excellence and diversity. 29 years later, YPC is internationally renowned, serving over 1,400 students of all backgrounds from neighborhoods all over the city each year and continuing to add to its portfolio of more than 100 works for youth chorus commissioned from today’s best known composers. 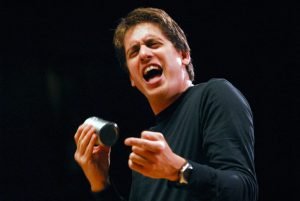 WHAT SPARKED THE ORIGINAL IDEA FOR THE YOUNG PEOPLE’S CHORUS?
I grew up in Washington Heights where my mother made sure her two boys followed their dreams. I wanted to study music, so she scraped some money together and bought me a piano. That wonderful gift would turn my world around. I discovered my passion and equally important, my music education opened doors, and I met people and made friends with children from other neighborhoods and so many different cultures and backgrounds. We shared a common interest in music, but were also deeply interested in each other’s cultures. I realized back then that young people have this marvelous ability to make friends, no matter what our racial or cultural surfaces. When I formed YPC after graduating from NYU, I wanted an ensemble of young people who would capture that same spark — a love for music coupled with a genuine fascination for other cultures — and nurture and strengthen it to create music that would be stronger because of the diverse voices.

HOW DID THE TRANSIENT GLORY COMMISSIONING PROJECT COME ABOUT?
When I started developing a repertoire for YPC, one of the frustrating realities I had to deal with was the meagerness of serious works for young voices. The classical canon has always treated children’s choruses as a sideshow. For too long children’s choruses performed “children’s songs” or pieces re-arranged for them from works composed for adult voices. But the child’s voice is a unique instrument, and it lasts only for a brief time. I wanted more works that would tap into the beauty of this fleeting instrument, so I reached out to composers with specific instructions: to take advantage of that unique sound and to not write down to children. There was some doubt and resistance at first because of the stigma attached to composing “children’s music.” Today, we have commissioned over 100 pieces of music from almost 100 composers, the majority of them through the Transient Glory series, representing the best of the composing universe. The music is extremely challenging, and the topics are substantive and relevant to today’s young urban singers, even for adult singers. The children may be in a transient state, but the music they create with the composers will continue to enrich the general vocal repertoire for generations to come, and that, I believe, is where the glory lies.

HOW HAS YPC BECOME A FORCE FOR SOCIAL CHANGE, AS MUCH AS FOR MUSIC?
Children in YPC come from the full spectrum of racial, cultural and social backgrounds across the city. But whatever differences they have disappear when they sing, because they have to sing as an ensemble, as one cohesive organism. Rehearsing and performing together for months or years makes them comfortable with each other, and sooner or later they ask each other a lot of questions, from the trivial, such as how they comb their hair, to topics that lead to larger discussions, such as what school they attend, their religion, their cultural origins. We encourage that kind of peer-to-peer learning, because kids put more trust in people their own age. You can only steer them in the right direction and watch as a genuine camaraderie develops. Then something magical happens. We see kids motivating other kids, mentoring and inspiring them. I call it the “chor-osmosis” effect. Our pitch and rhythm get solid, performance anxiety disappears, SAT scores go up, homework gets done, all the kids graduate on time, and seriously pursue college. There is no scientific process to verify the linkage, but I have observed it over 29 years and the results are so consistent there is no room for doubt. When this attitude of empathy and kindness develops in young people, you know it’s a personal value they will own for the rest of their lives. Sure, they grow older and graduate from the chorus, and most of them may not become professional musicians. But they become awesome people.

WHAT MAKES YPC’S MUSIC AND PERFORMANCES SO COMPELLING?
The distinctive quality of the music that YPC sings is a result of the chorus’s diversity.  We sing music in all styles, including full two-hour tour concerts of programming ranging from the Renaissance to contemporary works, many of which are Transient Glory commissions. The chorus demonstrated last season when they competed at the Golden Gate International Choral Festival and won gold medals in every category:  Contemporary, Folk, Historic, and Gospel. A few months later, YPC, which had been selected by American Public Media to represent America in the Let the Peoples Sing Euroradio choral competition in Munich, became the only American chorus in the 54-year history of the competition to win first place. And they won first place with two Transient Glory pieces: Gaby Frank’s Two Mountain Songs and Jim Papoulis’s Panta Rhei. We are proud that YPC is often selected to represent the U.S. in choral competitions around the world, and will do so again next year at the Songbridge Festival in Finland. Our children know they are not just singers but ambassadors of goodwill. Their message is harmony in diversity, and they are living proof that it works.

WHAT’S ON YPC’S UPCOMING SCHEDULE?
We are presenting our next Transient Glory concerts at National Sawdust (November 4) and at Merkin Concert Hall (November 6), premiering new works by Mason Bates, Jessie Montgomery (a YPC alumna), Robert Xavier Rodriguez, Joan La Barbara, Charles Wuorinen, and Michael Gordon (who was just named YPC’s first ever composer-in-residence). This is Michael’s fourth commission for us. This time he has written about the great trees found in New York City, like “Hangman’s Elm” in Washington Square Park and the Royal Paulownia in Snug Harbor, which is completely covered by purple flowers every spring. One of his previous works for YPC, Every Stop on the F Train, is on our latest recording. Transient Glory III also features some of our other favorite works from John Corigliano, Paquito D’Rivera, Meredith Monk, and Bora Yoon, plus a gem written by Terry Riley, co-commissioned by YPC and Kronos Quartet.