The Man Who Changed the Face of Youth Choirs 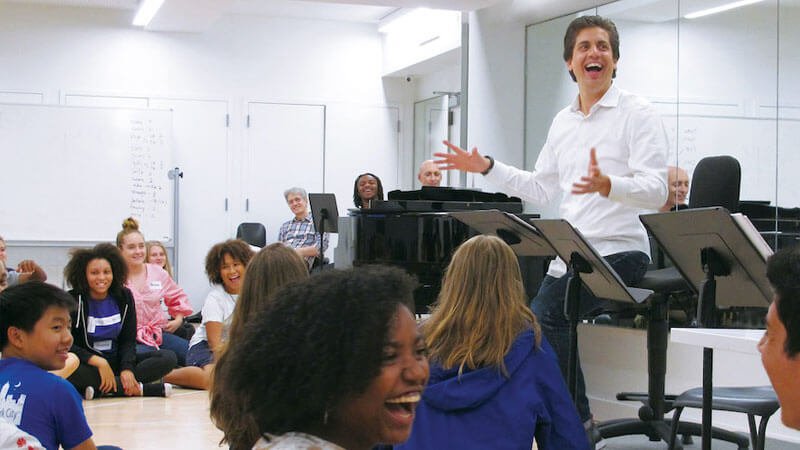 “Internationally renowned for its innovative diversity model and artistic excellence, and celebrated for medal-winning performances from Barcelona, Munich and Stockholm to Kyoto, Bremen and Prague, including being named “Choir of the World” at the prestigious International Choral Kathaumixw, the Young People’s Chorus of New York City has nurtured the talents of children from all walks of life since 1988. We spoke with YPC’s founder and artistic director, Francisco J. Nuñez, a MacArthur Fellow, about how YPC changed the landscape for youth choruses everywhere, his ties to the Bay Area and Los Angeles, and a new album that speaks to the many social issues we face today—through the lens of alumni and children.

How is running a youth chorus different today than three decades ago when you first started? Or is it?

I’ve noticed that children have become more introverted over the past few years, and the pandemic has made that even more so. When I first started working with children they were very open, and as they got older they became much more self-conscious. That can be expected, but since COVID, I feel like the children have lost their sense of sound. We need to work on rebuilding their confidence and finding their voices again. On a positive note, I’ve found that children now are much more willing to speak up about social issues and question their mentors. They are much more empowered to do this than when I first started YPC three decades ago.

How have you and your choristers used music to address the challenges we’ve faced this year, from the pandemic to calls for racial justice?

I started YPC with the goal of bringing together children of all backgrounds. That diversity is naturally reflected in our music and performances, and events in the world that impact their lives and their communities. Just Songs is a YPC-commissioned program that amplifies voices of first-time or emerging songwriters to inspire choristers to understand and access today’s world through music. In Just Songs (Unplugged), YPC talent performs acoustic versions of their songs that speak to the issues of social equity and the challenges we face today. Vocal Resolutions is another project that we started five years ago and includes poetry, essays and spoken word created by children during their time at YPC. These works reflect how these children felt about, and worked through, social conflict in the world and in their everyday lives.

Tell us about YPC’s connection with (the late) Ann Getty and Gordon Getty, who are known for their roles in the fine arts here in the Bay Area and Los Angeles.

We have had a connection to Gordon and Ann for several years. I met Gordon in Napa Valley in 2015 when YPC was invited to perform at the Napa Valley Festival. We went back a second time and started to sing his music and fell in love with it. He became our composer in residence and we perform his music at every event. Gordon and Ann both came to our gala this past March, where he and I spoke at length about work to further the importance of diversity and musical excellence. Gordon has written so much choral music that works perfectly for a child’s voice. We continue to work with his music and with him.

What would you say is the power of a youth chorus? What does it provide for the children and people who witness their music?

For years the children’s choir was always seen as an educational outlet for children, and we just waited for them to grow up and get older. YPC changed that with our commissioning series called Transient Glory in 2000. This is the first children’s choir to start commissioning the world’s greatest composers. We were able to show the children’s choir as a viable musical instrument on its own. We no longer had to sing adaptive adult music arranged for children; the music is specifically for children at the highest level. We have been able to commission 100 of the world’s most important concert composers to write for us.

What are some of YPC’s most memorable performances in the Bay Area and California?

We performed at the Golden Gate International Choral Festival in 2015 and won two first-place prizes. That was the first time an American choir won. We’ve also performed twice at the Napa Valley Festival and were invited to sing there this past summer, but it was postponed due to the pandemic. We will return to Napa Valley Festival next summer. We have a wonderful relationship with the San Francisco Girls Chorus as well. In Los Angeles, we composed something for the 25th anniversary of the Los Angeles Master Chorale and wrote a piece for them for Youth Choral Festival. We also work with Grant Gershon, who I consider one of the greatest choral conductors in our country.

What can you tell us about Just Songs(Unplugged)album?

This album is a combination of writing songs and making them cool for young people. We commissioned composers of color — young, emerging and first-time composers — using the ideas of justice because that’s what was important to them. That’s the meaning of the album title, JustSongs, but at the same time, they are just songs. These pieces will go through an evolution: The written song, the choral arrangement, the acoustic arrangement in the Unplugged album, and finally the full choral performance. This gives the music a second life and will enable the alumni who wrote the songs to work with our young choristers. We will then take the songs around the country, and because they are available on our website and Spotify, it will have a global presence.

Q: What can we look forward to from YPC?

We have two exciting events coming up: Our Winter Concert on Dec. 18 and 20, and our live performance at St. Patrick’s Cathedral in New York City on Dec. 17. These will be available online. Our largest, our Annual Gala, will take place in March next year—and we are hoping we can all gather in person by that time.

Read the full article at baybeat.com