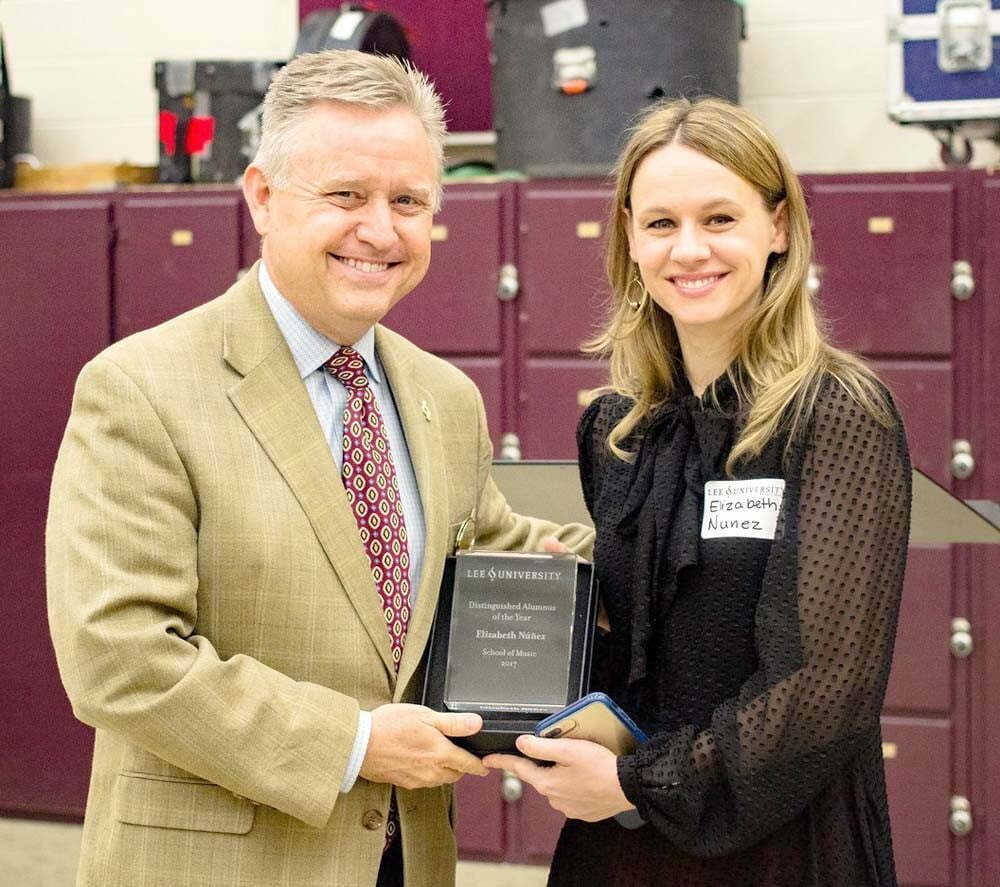 Elizabeth Núñez was awarded the 2017 Lee University School of Music Distinguished Alumnus Award at a department breakfast during Homecoming earlier this month.

“Not only is Elizabeth an exceptional musician, teacher, and conductor, but she is committed to changing the lives of America’s youth,” said Dr. William Green, dean of Lee’s School of Music. “Her work with the Young People’s Chorus extends beyond music into making an impact on each student’s educational journey and life direction.”

Núñez currently serves as the associate artistic director of the award-winning Young People’s Chorus of New York City, founded by its artistic director and Núñez’s husband, Francisco J. Núñez. YPC is an organization renowned for its diversity and level of artistic excellence.

“Elizabeth represents the Lee University School of Music on the world stage through her work with the Young People’s Chorus,” said Green.

At YPC, she created and directs the acclaimed Cantare chorus and serves as vocal coach for choristers in all six YPC divisions, ranging in age from 8 to 18, in rehearsals, performances, and for international tours to countries on four continents. Since joining the YPC in 2004, Núñez has led the Cantare chorus at international choral festivals in Kathaumixw, British Columbia; Llangollen, Wales; and at the Adolf Fredrik Choral Festival in Stockholm, Sweden, where Cantare was the first American choir ever invited to participate.

She founded and conducts The SoHarmoniums, an intergenerational chorus of women from ages 20 to 80.

As a sought-after choral clinician, Núñez has been invited by choral organizations across the country to give workshops and performances. Among them are the New York City Department of Education, Distinguished Concerts International, the Metropolitan Opera Guild, New York City School for Strings, New York State School Music Association, and the Norfolk Chamber Choir and Conductor Workshop of the Yale School of Music. She conducts at venues large and small throughout New York City, from Carnegie Hall and Jazz at Lincoln Center to Le Poisson Rouge and the Metropolitan Museum, as well as on national television, most recently on The Tonight Show with Jimmy Fallon.

Read the full article at ClevelandBanner.com.