YPC Performs Excerpt from “Fire in My Mouth”

“Protest,” an excerpt from Julia Wolfe’s acclaimed “Fire in my Mouth,” an oratorio based on the tragic 1911 Triangle Shirtwaist Factory fire, will be reprised by members of the Young People’s Chorus of New York City and members of the New York Philharmonic.

This Sunday afternoon performance is part of a weekend-long series of events and discussions on March 16 and 17 at the Fashion Institute of Technology to create a permanent memorial to this catastrophic event, which claimed 146 young lives.

This performance is free and open to the public. More information is available at www.rememberthetrianglefire.org 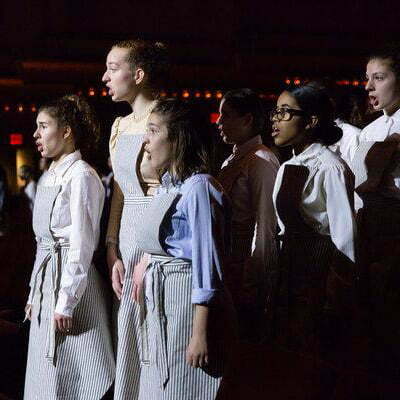 Tickets:
This event is free and open to the public

In January, over 100 female singers from Young People’s Chorus of New York City joined The Crossing and the New York Philharmonic conducted by Jaap van Zweden in three world premiere, multimedia performances of Julia Wolfe’s Fire in My Mouth at David Geffen Hall.

The response from critics and audience members was overwhelming. Here are some comments:

“Women are the narrative heart of this musical adaptation. For this world premiere, [Julia] Wolfe was gifted with the extraordinary contributions from the female members of the professional chamber choir The Crossing and the exemplary young women in the multicultural Young People’s Chorus of New York City. This aggregation of young women dominated with voice and presence…The night belonged to Julia Wolfe, The Crossing, and the Young People’s Chorus of New York City.”  – Classical Voice North America

“The 146 singers were all women of the same ages – young and just a bit older – as those who worked and died in the Triangle Shirtwaist Factory. Commitment shone in their faces, was heard in their voices and was evidenced by their every movement. They believed in Wolfe’s creation, and the audience was inspired by it.”  – Seen and Heard International

“The standing ovation that ensued lasted for several curtain calls… No one, save a few wheelchair-bound patrons, was still seated by the time the applause finally died out, something I’ve never seen at David Geffen Hall and don’t expect to see again for some time.  Indeed, it was the finest world premiere I’ve yet had the good fortune to attend.” – Oberon’s Grove

Wolfe, in short, has been steadily working up to Fire in my mouth. Still, it’s an accomplishment on a level unmatched in her previous work. Fire in my mouth is a monumental achievement in high musical drama, among the most commandingly imaginative and emotively potent works of any kind that I’ve ever experienced. – The Nation

Mr. van Zweden led a commanding account of a score that requires close coordination between disparate forces, and which ends with an elegiac final chorus in which the names of all 146 victims are tenderly sung to create a fabric of music and memory.  – The New York Times