Young Men of the Young People’s Chorus of New York City will head out to Georgia, where on February 7 and 8 they will be the Chorus-in-Residence of Savannah Sings 2019, Savannah’s Sixth Invitational Choir Festival, under the direction of Artist-in-Residence Francisco J. Núñez and hosted by Festival Director John Tisbert.

YPC’s Young Men will join young men and women from Savannah’s top school and community choirs in two days of activities under Mr. Núñez and YPC Assistant Conductor Sonny Willis. These activities will culminate on Friday evening, February 8, in an exciting two-part concert open to the public.

The concert opens with performances by all of Savannah Sings! participants and closes with an extraordinary Festival Men’s Chorus Showcase conducted by Mr. Núñez and featuring YPC’s Young Men and more than 150 male voices specially selected for this occasion.

The 7 p.m. concert takes place at the Yamacraw Center for the Performing Arts of the Esther F. Garrison School for the Arts.

Tickets $10 for adults and $5 for students under 18 years on sale now.
(Proceeds from this performance will support future Savannah Sings! festivals) 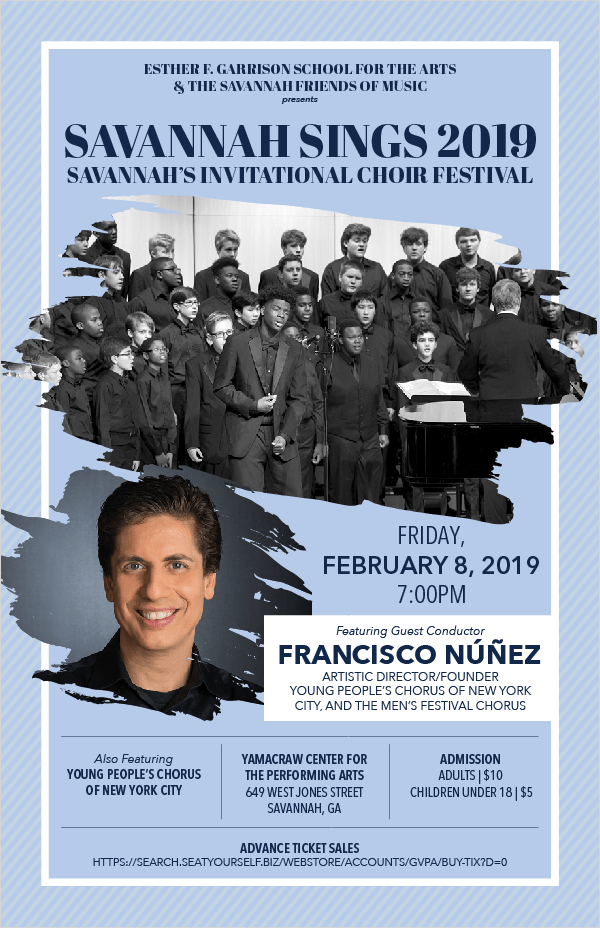 Yamacraw Center for Performing Arts at the Esther F. Garrison School for the  Arts