EXPERIENCE EVERY STOP ON THE F TRAIN – IN FIVE MINUTES!

In 2007, as part of our Transient Glory concert series, YPC premiered Michael Gordon’s “Every Stop on the F Train.” It returned in 2008 in a new format—a music and film collaboration by Michael Gordon and Bill Morrison. The Los Angeles Times called their work “dazzling.” We have to agree.

“Every Stop on the F Train”

Michael Gordon on creating the music:
“What’s more urban than the subway? When Francisco J. Núñez asked me to write a piece for Transient Glory, I immediately thought of all the stops that whiz by us as we sit on the train waiting to arrive at our destination. The A train has the longest route, but I think the F has the best sounding stops. I also like that the F starts in Jamaica, Queens, and ends in Coney Island, Brooklyn. I organized the piece in three sections corresponding to the boroughs the F Train travels through. Every Stop on the F Train starts with a single melody in Queens, splits into a 2-part canon (at the eighth note) when it arrives in Manhattan and then into a 4-part canon (at the quarter note) when it arrives in Brooklyn. New Yorkers will note that some of the stops actually have 2 names (42 Street/Times Square); in those cases, I chose only one.”

Bill Morrison on creating the film:
“When I was approached about making a film for the piece, I did not hesitate to accept. When I began filming, I realized there were several complications with shooting on the subway. Firstly, it was illegal. Secondly, there were other people on the subway who may or may not like being filmed. Thirdly, the subway did not provide a smooth ride. And fourthly, each and every inch of glass in the entire subway system is covered with scratches and scrawls. I found a tripod that clamped to the poles inside the car provided the stability a conventional tripod could not. I discovered that either New Yorkers didn’t mind being filmed, or they were just too darn polite to say so. And I learned to like all the scratches on the windows. I was not able to resolve the legality issue.

“So I tried clamping the camera between the subway cars, figuring at least my camera would be out of the way. In so doing, I found my protagonist: the spring connecting two cars, which moves with acceleration of the car ahead of it. As this flying coil navigated the city, I felt like each station pulled the next one through the frames of my film, just as the voices of the YPC pull Michael’s measures along. They were exhilarating rides from Queens to Brooklyn and back. A homeless guy once asked me if I was all right, and I assured him that everything was going great.

“I was eventually collared by an MTA cop (and not by the two seen on the 42nd Street platform in the film). I explained to him that it was the camera that had been riding between the cars, not me. And furthermore, that the camera had only filmed the platforms lining the subway, not the subway itself. He gave me a ticket for riding between the cars, but not for filming on the subway. I thanked him for not busting my chops too bad. To my surprise, he thanked me for not busting his chops too bad as well.” 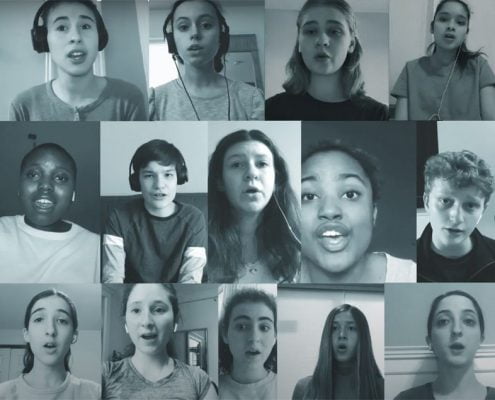