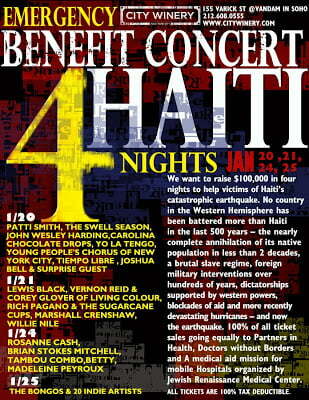 On Wednesday, January 20, at 8:30 p.m. the Young People’s Chorus of New York City will open the first of four concerts at the City Winery (155 Varick Street) to benefit the relief efforts in Haiti.

“What can I do?” is a question so many are asking as they witness the struggles of the Haitian people to recover from the devastating earthquake that continues to take the lives of so many men, women and children.

The members of the Young People’s Chorus of New York City asked themselves that same question. So when Félix Augustin, the Consul General of Haiti in New York City, contacted them to help organize a benefit event, YPC Artistic Director Francisco J. Núñez contacted the noted philanthropist Michael Dorf, who instantly offered the City Winery for two nights of benefit concerts—Wednesday, and Thursday, January 20 and 21.

The response from artists was so overwhelming that we added two additional dates—Sunday and Monday, January 24 and 25. Among those taking part are artists from across the musical spectrum, ranging from Patti Smith, Rosanne Cash, and Joshua Bell, to the Tambou Combo, today’s hottest Haitian band, as well as a line-up of many of New York’s best indie bands.

“The Young People’s Chorus of New York City has been asked by the government of Haiti to help with the relief effort by putting together a concert to benefit the people of Haiti.”

While we can’t match the national effort we can in a small way help raise moneys by gathering together the best possible talent in our region and getting them to perform at no cost. Enclosed is the schedule of events that we will be putting together and we hope you will attend one of these events to show our solidarity with the Haitian people.

Please attend one of these events to help with this terrible catastrope for an impoverished and desperately nation.”

Donations are tax deductible as allowed by law and 100 percent of proceeds will be distributed equally to three organizations:

Félix Augustin, Consul General of Haiti will greet everyone and thank them for their generosity. The following artists are among those who will perform: the Young People’s Chorus of New York City conducted by Francisco J. Núñz, Patti Smith, The Swell Season, John Wesley Harding,Carolina Chocolate Drops,Yo La Tengo, Joshua Bell, and Tiempo Libre

Tickets are available at the door or online at
www.citywinery.com
For more information, call 212.608.0555