From the Top News Release 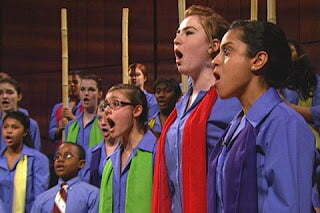 You can also download see a web-version featured video today by visiting http://www.pbs.org/wgbh/fromthetop/pages/

You can download a lesson about the YPC by visiting http://www.pbs.org/wgbh/fromthetop/for-teachers/season-2/207/all_things_change.php

The multicultural Young People’s Chorus of New York City (YPC), among today’s finest youth choruses, will be featured on PBS’s Emmy-nominated From the Top at Carnegie Hall on public television stations throughout the country in July. The program airs in New York City on Thirteen/WNET, Channel 13, on Sunday, July 27, at 11:30 a.m.*

Hosted by pianist Christopher O’Riley, the From the Top at Carnegie Hall series showcases America’s most extraordinary young musicians from 8 to 18, capturing the excitement of a Carnegie Hall performance both onstage and off. It gives a behind-the scenes look at a typical rehearsal conducted by YPC Artistic Director and Founder Francisco J. Núñez and a glimpse into how Mr. Nunez’s vision of combining diversity and musical excellence forever changes the lives of its members. The segment concludes with the chorus singing Luis Kalaff’s Guayacanal and Panta Rhei, a work commissioned by the chorus from Jim Papoulis, a composer who combines contemporary sounds with musical traditions from around the world.
From the Top at Carnegie Hall is a co-production of WGBH, From the Top, and Don Mischer Productions in partnership with Carnegie Hall.

*For stations and times, please to go to the From the Top Web site at www.pbs.org/wgbh/fromthetop/pages/ or e-mail tvcomments@fromthetop.org –

July is an eventful month for the Young People’s Chorus of New York City. In addition to the national telecast of From the Top at Carnegie Hall, three of the chorus’s five divisions are competing in international choral competitions and performances in Europe and Canada.

This month Mr. Núñez takes the Concert Chorus and Young Men’s Division to the World Choir Olympics in Graz, Austria, where the two divisions will defend the gold medals they won in the 2004 Choir Olympics in Bremen, Germany. Following the Olympics, they will travel to Salzburg, Vienna, and Prague where the two YPC divisions will sing in the 2008 Rhapsody Music Festival.

In North America, YPC Associate Conductor Elizabeth Núñez and the Cantare Division of the YPC, are heading Powell River, British Columbia for the International Kathaumixw Festival and Competition, hoping to repeat the YPC’s gold medal-winning performances of 2002.

About the Young People’s Chorus

The Young People’s Chorus of New York City was founded by Francisco J. Núñez in 1988 with a commitment to combining cross-cultural understanding among children of different ethnic, economic, and social backgrounds with musical excellence.

Since then, the chorus, comprising young people from every corner of New York City, as well as Long Island, New Jersey, and Westchester, has distinguished itself as one of today’s finest and most influential youth choruses, winning cheers for its performances on three continents. They have sung everywhere from Carnegie Hall and the White House to Smetana Hall in Prague and St. Martin in the Fields in London, and represented the United States at the 2005 World Symposium on Choral Music in Kyoto. The chorus returns to Japan in summer 2009 for a four-week, 19-city tour and was recently honored to sing for Pope Benedict XVI on his first papal visit to the U.S. Each year, YPC serves more than 1100 children from 7 to 18 from the New York City area through its core after-school program encompassing five divisions and its satellite program in eight of the city’s public schools.

In addition, YPC has impacted the world of choral music itself by commissioning and premiering more than 50 pieces of music for children’s chorus from a Who’s Who of today’s most respected composers as part of the YPC’s Transient Glory concert series. All of this music is subsequently published so that other choruses worldwide can share in the performance of these compositions. Nineteen of these works are included on two acclaimed Transient Glory CDs.

The chorus has been recognized with numerous honors, including a 2005 Chorus America/ASCAP Award for Adventurous Programming and Chorus America’s 2006 Education Outreach Award. They have also been cited as a leader in demonstrating a strong commitment to urban at-risk youth by the New York State Assembly and the Mayor of New York City and as a “national model of artistic excellence and diversity” by the Presidential Committee on the Arts and Humanities. For more information, visit http://www.ypc.org/.