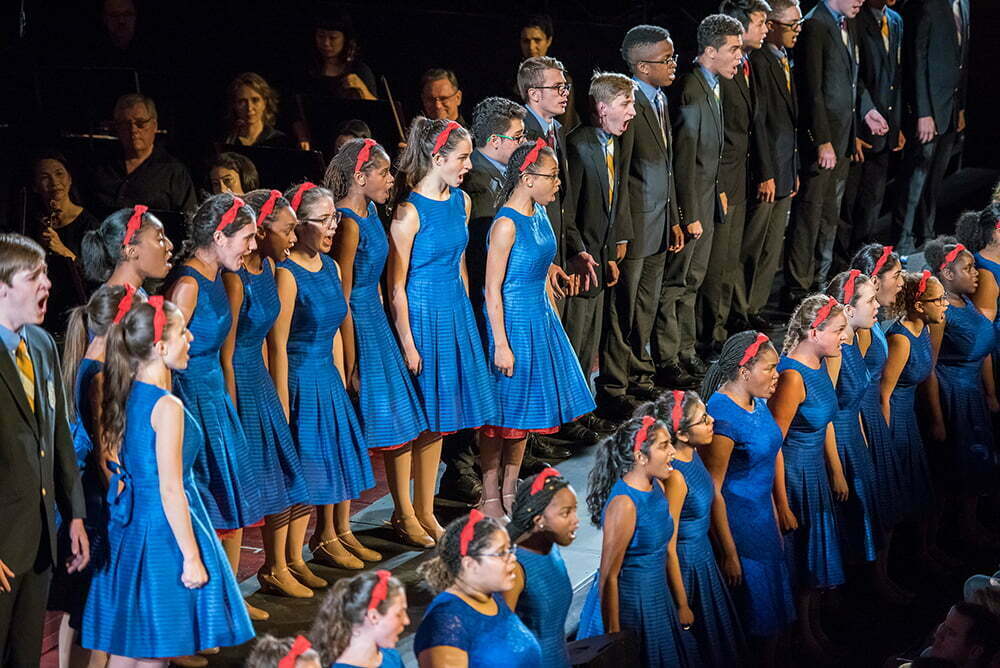 The mood of the country over the last year has been one of disaffection, discord, disunity, and disgust. The music of Mozart, Beethoven, and Handel is a balm to the ears and the soul, assuring us that there are immutable beauties of the mind and soul that historical aberrations cannot deface or erase. The 2017 Mostly Mozart Festival opened on July 25 and 26 with a program called “The Singing Heart” dedicated to the optimism and unlimited potential of the very young in a world filled with ignorance, violence, and cynicism.

In the program notes, Mozart scholar Peter A. Hoyt wrote, “Whereas philosophers and theologians had previously portrayed mankind as in decline, the scientists, political theorists, and artists of the Enlightenment began to envision a society capable of previously unimagined progress. A valuable freedom from conventional modes of thought was found — rather surprisingly — in the child. Youth ceased to be regarded as a mere prelude to adulthood; instead, writers like Jean-Jacques Rousseau believed children could intuit possibilities that escape fully integrated members of society.”

The program was a triumph of creative programming, mixing the classical with the folkloric and the sophisticated with the naïve. The Young People’s Chorus of New York City, a multicultural youth chorus led by Francisco J. Núñez (he also charmingly acted as host on July 26), opened the evening with Mozart’s “Kyrie, K.90” (1772) — composed by Mozart at the age of 16. Then each movement of Mozart’s “Haffner Symphony” (played with panache by the Mostly Mozart Orchestra led by Louis Langrée) was interspersed with traditional folk songs performed by the Young People’s Chorus. This practice of inserting solo pieces between the movements of a symphony was purportedly a common practice in the 18th century. Though it added variety to the program, it did diffuse the internal cohesion and interplay between each movement of the “Haffner Symphony.”

Each folk song was performed with carefully choreographed movements and gestures by the charmingly costumed youth chorus, who displayed polished musicianship, discipline, and showmanship. The choral folk songs mixed the international with the devotional. “Hark, I Hear the Harps Eternal” and “Didn’t My Lord Deliver Daniel” are traditional hymns and spirituals but the exotic “Três Cantos Nativos dos Indios Kraó” evokes the sounds of the Brazilian rain forest. Bird calls and soft percussive sounds eventually bring a rising thunderstorm to the stage, which resolve into a melody based on a tune sung by the Kraó Indians. The children used their voices to recreate the sounds of nature with virtuosic exactitude and then broke into song.

The traditional French children’s tune “Ah vous dirai-je, maman” (better known to us as “Twinkle, Twinkle, Little Star”) was sung with spirit despite a rather busy and eccentric arrangement by Núñez. (Contrary to popular canard, Mozart did not compose this song as a child, though he did later arrange piano variations to the melody. These variations could and should have been added to the program — there was a perfect interpreter on hand.)

The evening ended as joyously as it began with a spirited performance of Beethoven’s “Fantasia in C minor for Piano, Chorus, and Orchestra (‘Choral Fantasy’)” led by the 15 year-old piano prodigy Kit Armstrong in his Mostly Mozart debut. Armstrong opened the symphony with a piano introduction of staggering clarity, command, and virtuoso technique. Langrée vigorously led a large cadre of six vocal soloists (which included such talented singers as Janai Brugger, Brandie Sutton, Jennifer Johnson Cano, and Miles Mykkanen in music that denied them solo opportunities), Armstrong on piano, two choruses, and the Mostly Mozart Orchestra. The jubilant “Choral Fantasy” is reminiscent in spirit, force, and scope to the exultant “Ode to Joy” finale of Beethoven’s “Ninth Symphony.”

Beethoven’s celebration of art and the human spirit triumphing over discord sent us into the summer night with these sentiments (translated by John Glenn Paton): “When music’s magic holds sway, and poetry’s sacredness speaks out, magnificent things must take form, night and storms turn into light. Outer calm, inner joy prevail for the happy person; indeed, the arts’ spring sunshine lets, from sorrow, light come into being.”