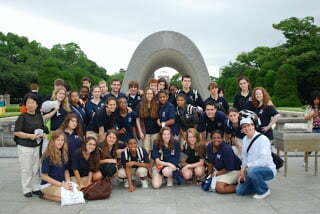 “Even though we have been doing the same concert multiple times, each one tends to be a little different than the last. About a week ago, Francisco decided that we should step off the stage and interact with the audience during one of the songs in the second half. Because I am shorter than many of the other choristers, I am in the front for most songs, thus a prime candidate to step off of the stage and into the audience. Performing itself can be scary and intimidating at times, but going into the audience was much more so. After stepping off the stage I had no idea what the reaction would be, and was expecting the worst. However to my surprise our Japanese audience was overly excited to be able to interact with us. So much so in fact, they even reached their hands out in an attempt to grab ours. The first time we went down into the audience we were all very surprised and taken aback by this feedback, however after going into the audience for four of five concerts we have gotten quite used to it. The audience continues to be very interactive and ecstatic when we walk down, which always comes as a nice surprise. Although we have gotten used to our eccentric audiences, they continue to surprise us. A couple concerts ago, one of our choristers, Marissa, was offered a key chain and last night two of our choristers, Hadley and Josh, received flowers from one audience member!

The trip has been great so far and our countless wonderful audiences always help to inspire us throughout our long concerts. I can’t believe we only have seven more left!”

Reflections on the Japan Tour Experience
Scroll to top