“After the concert this afternoon in Kobe, we were told that we could do what we wanted for dinner so Nathaniel, Charlie, Will and I got a reservation at a Kobe beef restaurant recommended to us by our friendly neighborhood Sheraton concierge. Dressed in the finest clothing our suitcases had to offer, we took an overpriced cab ride into downtown Kobe. The taxi let us off at the end of what appeared to be a main drag, but the restaurant was nowhere to be seen. The concierge had given us a map, but it was all in Japanese apart from a McDonald’s logo that thankfully corresponded to one near where we were dropped off. We started walking down the street in an attempt to follow the map but after 10 or 15 minutes figured we had gone to far. We went into a nice-looking restaurant and asked for directions. After a quick conference with other waiters, one member of the staff kindly walked us two blocks back from where we had been and pointed us to the restaurant. Finally we made it upstairs and sat down.

It was better than I could have imagined. I can’t emphasize that enough. We sat around a counter where a very nice chef prepared every course of the meal in front of us. We ate our way through 4 different types of amazing appetizers and sides before we saw the beef. He brought it out in huge hunks that he began to masterfully slice and cook with uncanny precision. Every part of the meal was unreal but the steak itself was in another league. The portions were small (about 7 ounces) but the flavor and tenderness were unparalleled. I can’t even do justice to how good it tasted in this limited space. Anyway, we finished our meal, got the check, fainted, paid it, and went back to the hotel. 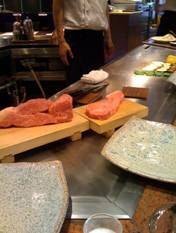 And now, here is the tale of how we got a standing O:

When we first got onstage in the hall today, a collective awe swept over the chorus as we looked upon what could possibly have been the most beautiful hall we have ever performed in: 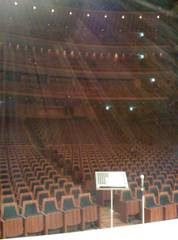 The first set – the serious and more musically difficult half – went very well. Even the bamboo stick playing by the Young Men during Panta Rhei went off pretty cleanly. (I will confess, however, that during one of the hits I managed to slam my foot rather than the riser, resulting in my Herculean effort not to make a pained expression on stage.)

Going into the second half – the high-energy, movement-filled segment of the show – we were feeling pretty good. While the set ends with a lot of choreography, it starts with slower songs in four languages. The electricity in the hall was palpably building after each one and it was clear that the hall was ready to explode. When we went into our gospel and spiritual section to close out the concert, the audience erupted perfectly on cue in a way that even Hollywood would have probably rejected as too unrealistic. At the beginning of the tour, the Japanese Consul General told us that the audiences will clap politely after songs and then boisterously at the end if they liked the concert, but today he was proved wrong as cheers were audible through the applause. The concert officially ended with the conclusion of “Music Down in My Soul,” and this is where the excitement hit a new level.

As per the Consul General’s prediction, the audience clapped boisterously, but something surprising happened: scattered among the crowd, people began standing. We sang our two encore pieces as the crowd managed to somehow get even more excited. Onstage this resulted in an amazing feeling of pride and confidence. It was invigorating to know that we had elicited this type of reaction from them. After the second song we bowed another few dozen times and then excitedly went offstage.

We were too wound up to know what to do with ourselves. The clapping continued, and even intensified. Backstage, some people had already started to take their ties and scarves off when all of a sudden we were whisked back onstage…another encore! Filing back on the risers to another burst of applause, we got up and performed “Give Us Hope.” We had earned the respect of this audience enough to deserve the chance to sing another song.

There are certain moments that make all the preparation and work we do worthwhile, the end of that concert was one of them.”