[Lincoln Center: The Score] Sharing Her Voice of Wisdom 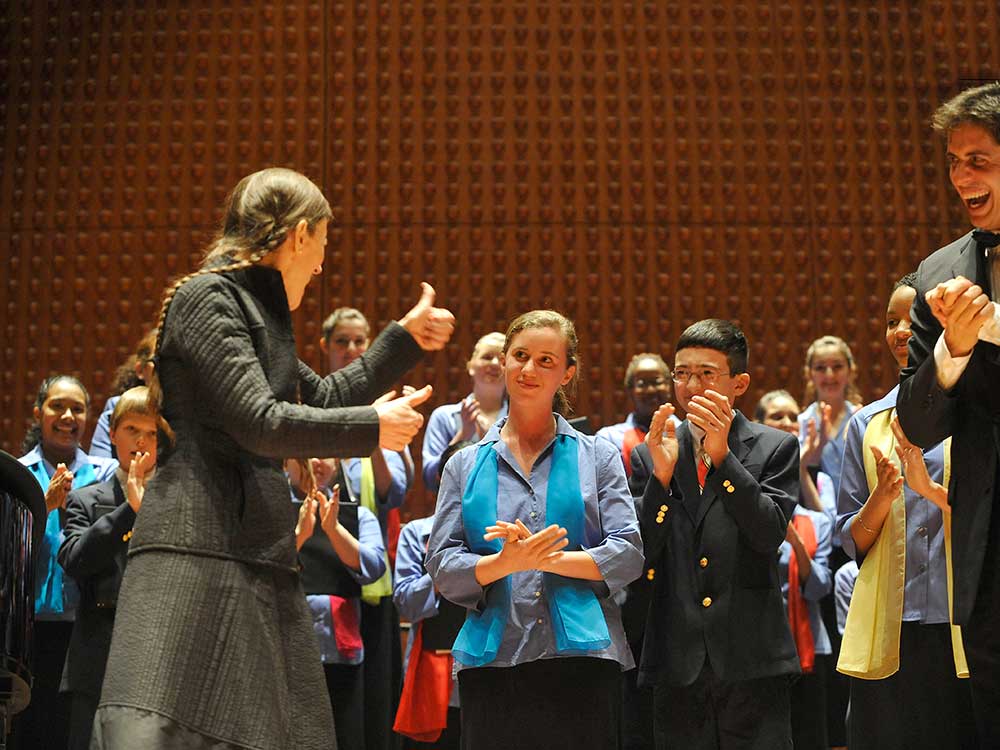 The groundbreaking, multifaceted artist Meredith Monk has spent much of her career sharing the many aspects of her interdisciplinary performance style through collaborations and workshops with professionals and amateurs across the globe. For this year’s White Light Festival she has shared her wisdom and insight with the members of the Young People’s Chorus of New York City (YPC) to create Dancing Voices, her new work especially for children (October 20–21).

“I remember when I was eight years old, in third grade, when they took us down to the basement of the school, and they told us about the atom bomb,” Meredith Monk says, seated on the sofa in her downtown Manhattan loft. “It was like eating the apple in the Garden of Eden. I remember thinking, as an eight-year-old child: ‘I wish that this could be yesterday and I’d never heard this.’ The knowledge that that existed changed my life. That’s how sensitive kids are.”

Monk’s sensitivity—along with her perceptiveness, curiosity, and courage—helped her to blaze a quintessentially singular path as composer, performer, choreographer, and director. A seasoned artist confident in her practice, she lately has grappled with existential issues that confront all of humankind, an odyssey illuminated by the titles of some of her recent works: Mercy, Impermanence, On Behalf of Nature. How do we express concern for one another when divisions run so deep? How do we heal ourselves after incalculable loss? How do we preserve the planet upon which our existence depends?

“The voice is embodied, a kinetic instrument in itself.”

Dancing Voices, a new evening-length presentation Monk designed specifically for children to perform, was not conceived to assert a place among those more philosophical meditations. Its genesis, in fact, was wholly practical: Francisco J. Núñez, artistic director of the Young People’s Chorus of New York City—an ensemble esteemed for championing contemporary composers—approached Monk hoping to assemble a framework in which to present another of her compositions already in its repertoire: Three Heavens and Hells.

Monk composed that piece—based on texts that Tennessee Reed, the daughter of poet Ishmael Reed, wrote at age 11—for the YPC’s Transient Glory series in 2007. Excerpts from the sophisticated seven-movement work had featured in multiple YPC concerts; now, Núñez wanted to present the composition in its entirety as part of a full-evening spotlight on Monk’s music and her collaboration with the chorus.

As it happened, Monk had fashioned another work for young singers: Dancing Voices, presented by Waelrant Children’s Choir, a Belgian ensemble, in 2010. For that occasion, Monk assembled excerpts from works spanning much of her career—Book of Days, Atlas, Education of the Girlchild, American Archaeology, and more—which she choreographed and performed in collaboration with the all-treble chorus. For the YPC, Monk proposed an evening that would begin with Dancing Voices, continue with a subtly streamlined revision of Three Heavens and Hells, and conclude with “Ascent,” a climactic segment from her 2008 work Songs of Ascension.

“There’s definitely an arc,” Monk says, describing how the chorus will swell from 21 singers in the spirited Dancing Voices to 40 for the contemplative Three Heavens and Hells, and then to 70 for “Ascent,” including older boys whose voices have changed. “Dancing Voices has that playfulness, and also the individuality of those 21 kids, building into a more unified force in Three Heavens and Hells, and then an even wider force in ‘Ascent.'”

If pragmatism prompted this new triptych, serendipity provided an unanticipated clear cohesiveness. Even, perhaps, a kind of narrative throughline, running from youthful inquisitiveness and companionability through more somber ruminations, and onward to the attainment of insight and wisdom—a transformative journey echoed in the very timbres of the voices involved.

By the time Dancing Voices comes to the stage, another such journey will have taken place already: that of highly trained young performers granted the opportunity to work with an artist whose practice involves coaxing voices to dance and bodies to sing, through techniques that bypass traditional classical music convention.

“There is no music, when it comes to Meredith, really… it’s a piece of paper with notes on it, but it does not come alive without her,” Núñez says. “She comes in and she changes who we are. The experience that she gives us—using the entire body and taking notes on a page and making it completely different—is not something I can even do, personally. I have to learn, and she’s got to teach us how to learn her music, because we want to keep it alive. We want our children to be the future of this kind of music.”

Monk’s practice, she explains, involves reuniting aspects of voice and body that had grown disconnected in the classical music tradition. “What I’ve always done is, the voice is embodied, a kinetic instrument in itself,” she says. “I think that opens up space—again, a thing that I think is not taught so much in the Western tradition is the concept of sound in space, actually acknowledging space, thinking of the voice going through space, and even space in terms of the way something’s staged, the relationship between people close and far.”

Those insights took root during Monk’s own childhood when, affected by a condition that limited her vision, she learned to perceive the world through sound. Enrolled by her mother in a Dalcroze eurhythmics program, she learned to link movement to music. Now, having created a body of work that seems to tap primal wellsprings of physicality and spirituality at once, she is keen to share her art and insights with children, whose native creativity is threatened by a world awash in media noise.

“Children now, their imagination is forced into preexisting forms: characters, forms that are going to make money,” she laments. “I mean, kids can take a piece of string and make something.” In working with children, she explains, she seeks to build an artistic family. Interdependence is encoded directly into her compositions; singers learn quickly to rely upon one another. “I think kids really understand that,” Monk says. “They want to participate.”

For Núñez, yet another unifying strand runs throughout the disparate parts that together make up Dancing Voices. “It is the idea that we’re passaging, we’re going through life to the next level, and youth is our future. And Meredith is saying, ‘I believe in our future, I believe that these children are going to be great, and I’m giving them me. You will remember me, and you will pass me down to your next generation.’ For me, that is the ultimate gift of any teacher, or any person: to give your gift of yourself.”