At Home for the Holidays with the Young People’s Chorus

The Young People’s Chorus of NYC presents “Listen to the Music” at Lincoln Center, on March 12, 2019, conducted by Francisco Nunez. Photo: Stephanie Berger. 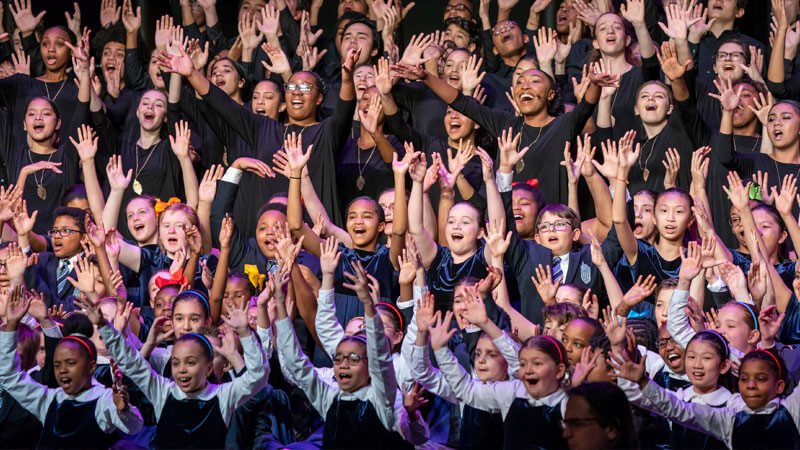 “Choristers from the city’s esteemed youth chorus tell us about their favorite on-stage memories, recording music at home, and hearing their voices on the radio.

There is no place like home for the holidays, and for the Young People’s Chorus of New York City, the sentiment has taken on a new meaning this year. Its 2,000 talented members from different neighborhoods and backgrounds usually come together at their rehearsal space across from Lincoln Center, which they fondly refer to as ‘home.’ This year, although they must be apart, they are still singing in unison — just from their individual residences. And instead of gracing the stages of Carnegie Hall and St. Patrick’s Cathedral, they have been recording music on phones and uploading it onto computers.

The treasured New York chorus, founded in 1988 by Washington Heights native Francisco J. Núñez, has still found ways to spread comfort and joy to the city this winter season. They will be making spirits bright with ‘Once Upon the Holidays,’ a two-night concert streaming live on Dec. 18 and 20 that will feature close to 500 of its members, ages eight to 18. They will also resume their highly anticipated position as a mainstay at St. Patrick Cathedral’s ‘A City Singing at Christmas,’ by contributing prerecorded songs, such as ‘The Twelve Days of Christmas’ and ‘Believe.’ In addition, they will be releasing a rendition of ‘Joy to the World’ on Spotify on Dec. 11.

We had the pleasure of speaking with two delightful choristers, Sam Chachkes, 18, and Alexis Granville-Wallace, 17, who both started with YPC at the age of seven.

What have been some of the most memorable stages you’ve performed on?

Sam: There was one when we were on tour in Napa Valley and went to this church in a mountain and the sound was just so beautiful. I remember we were there with an opera singer, Lester Lynch. We were up there rehearsing, and he was in the room talking to — I think one of his managers — and he paused his conversation just to listen for a minute, because the sound in that church was so beautiful. When the concert ended, we were all crying because of how well our voices came together.

Alexis: ’The Today Show.’ It was a very good experience to wake up at 4 in the morning to rush to show. To be there so early, so tired, and then 6 a.m., we’re on. It was the most fun I’ve ever had.

What has been one of your favorite songs to sing?

Sam: When I was in eighth grade, we sang something called ‘The Epiphany Project,’ which was at Brooklyn Academy of Music, their Next Wave Festival. And Paola Prestini, who’s a composer that YPC works with a lot, and one of my favorite composers, wrote this 30-minute piece, and it was all performed on a bed of torn-up cork. The theme of the song was the process of life, which was, as an eighth grader, something really interesting to be doing.

Alexis: My favorite song happened a long time ago. I was in the third grade; we sang ‘Footloose.’ It was a very fun song and we sang it at Carnegie Hall. That’s a pretty scary place to be, on a big stage with a lot of people at a very young age. But the song was so lighthearted, that I forgot I was on stage with people. I was just having so much fun.

In March, almost 600 YPC members contributed to the virtual album ‘Heroes,’ which was dedicated to healthcare workers, by recording themselves singing individually at home. What was that process like?

Sam: There’s this really great system up on the website for how to record your videos and send everything in. You send in your audio first. You find a closet somewhere where there’s no reverb, you stand with your computer in one hand, your phone in the other hand. And you play the audio on the computer and sing into your phone in your mom’s closet. And you take the recording and upload it and YPC sends it to some magic person. They send you back the audio and then you record the video over that. It’s crazy that we’re all doing it on our phones.

I’ve seen YPC sing at St. Patrick’s and it’s always my favorite part of the Christmas concert. What has your experience at that show been like?

Alexis: The first time I did it, I remember singing a Christmas song, holding candles and walking around. The lights were off and all you could see were the candles. Especially in a church setting around Christmastime, it’s a very magical sight to see.

Sam: I’ve done St. Patrick’s six times and it’s magical every single year. I remember one year, we were walking around with the candles and they always open up the giant doors, and it was snowing and the snow was coming in.

How did you prepare for the holiday special? You actually were able to shoot a performance outdoors at six feet apart.

Sam: Actually, on the day Biden won the election, we were filming. It was COVID-safe, six feet apart the whole time. There was choreography; they had a professional film team there. It was a 70-degree day and we were in winter clothes. We’re also filming stuff at home. There’s a lot that you can do at home that you can’t do on stage.

You’re also releasing ‘Joy to the World’ on Spotify. What do your friends think about that?

Alexis: There are other songs that are on iTunes and they come on and I’m in the car and I can hear my friends’ voices. My friends, if they’re in the car too, they go, ‘Hey, is that you?’ And I’m just like, ‘Yeah!’ It’s a nice feeling.

What are some things you’ve learned from your artistic director, Francisco, that you’ll take with you through your life?

Sam: Having a good sense of humor. Bringing joy to what you do, that’s incredibly important and what Francisco demonstrates every day and the rest of the YPC staff too. And definitely just as important, expecting the best of yourself and the people around you. We’re a really good chorus, and I think that’s because Francisco and Elizabeth [Núñez, associate artistic director] and other people expect us to be really good at what we do.

Alexis: One of the biggest lessons I’ve learned from Francisco is that no matter what song you’re singing or what day you’re having, to be bring happiness to the stage and what you’re doing. We have a job to do, and everything outside shouldn’t come in to ruin everyone else’s day. And I’ve learned that from day one, if I’m having a bad day, YPC makes that day so much better.

To learn more about YPC, donate and buy tickets to their winter concert, please visit www.ypc.org

This interview has been edited and condensed.”

Read the full article at www.otdowntown.com