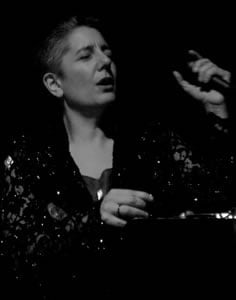 Machaut in the Machine Age VI: Liement me depot

“One of new music’s truly free spirits” (Village Voice). Eve Beglarian is a composer, performer, and audio producer whose work has been performed in mainstream concert halls and theaters as well as in clubs and lofts. Her chamber music has been commissioned and performed by the California EAR Unit, Relâche, the Paul Dresher Ensemble, the Crosstown Ensemble, Dinosaur Annex, and the New York New Music Ensemble, among others.

Current projects include an opera based on Stephen King’s The Man in the Black Suit; an orchestra piece commissioned as part of the Continental Harmony project for Orchestra X and DiverseWorks in Houston; and a song cycle/concept CD collaboration with boombox virtuoso and composer Phil Kline. Recordings of Eve’s music are available on CRI Emergency Music, OO Discs, Accurate Distortion, Atavistic, and Kill Rock Stars. In addition to her composing and performing work, Eve directs and produces audiobooks of authors including Stephen King and Anne Rice for Random House and Simon & Schuster. More information about Eve Beglarian is available at www.evbvd.com.

About “Machaut in the Machine Age VI: Liement me deport”

“Machaut in the Machine Age VI: Liement me deport” is a beautiful, haunting piece which Eve Beglarian based on the words and music of 14th-century composer/poet Guillaume de Machaut (1300-1377). Eve translates Liement me deport as “smile when your heart is breaking,” and her idea was to give this work a contemporary “techno” feel, bringing the 14th century into the 21st.

While Eve Beglarian is a groundbreaking, cutting edge composer of our time, so too was Machaut the most cutting edge composer of his time and the greatest practitioner of music of the ars nova period, a stylistic period centered in France in the late middle ages. The ars nova style is nowhere more perfectly displayed than in Machaut’s considerable body of motets, lais, virelais, rondeaux, and ballades, turning the music of his time on its head and introducing what would be known as isorhythm, introducing more complex rhythms and structures, often repeating patterns and manipulating them.

In the same vein, Eve takes this music and does a Machaut.  The piece sets the first phrase of Machaut’s virelais in three different rhythmic versions, which are sung in canon.  Each group has their own percussion rhythm, which can be clapped or snapped as determined by balance issues in the performance space, and all of these are performed with a processed sound of voices or harmonicas.

The three vocal parts are in different meters, and the musical examples are illustrated with different time signatures.  The three patterns, while different in meter, share a common pulse.  The pulse is maintained throughout and the pattern is internalized by the performer, then put against a conflicting pattern, resulting in a clash of the parts. For radio performance, the singers should be miked as closely as possible and sing as softly and lovingly as they can, in which case finger snaps are probably the sound to use for the percussion line.

Machaut’s composition is notable as one of the earliest medieval love songs in its expression of contradictory feelings (the language of pain, anguish, “sweet suffering” and elation) that occur when one’s heart is broken in love. This theme of being rejected in love (or unrequited love) has a timeless, centuries-long tradition that continues in many forms of music today.  The work has a “timeless” quality to it because it takes a piece from the 14th century and transports it into the present with the use of technology and a different musical interpretation on pre-existing material.