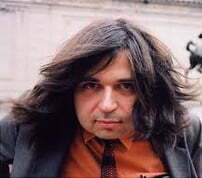 Frank J. Oteri‘s voracious musical appetite finds many avenues of expression, but ultimately all lead back to his musical compositions which range from full-evening stage performances and chamber works to solo compositions. In all of these works, some of which employ alternative tuning systems, Mr. Oteri combines emotional directness with an obsession for formal processes, incorporating techniques from styles of music as seemingly unrelated as minimalism, serialism, Broadway show music, and bluegrass.

His music has been performed in the U.S. and abroad in venues ranging from Carnegie Hall’s Weill Recital Hall and the Knitting Factory in New York City, and a Baptist church in the middle of Emanuel County, Georgia, to the Contemporary Arts Center in Vilnius, Lithuania, where the world premiere of MACHUNAS, his evening-length performance oratorio created in collaboration with the Italian painter-performance artist Lucio Pozzi, took place.

An outspoken crusader for new music, Mr. Oteri is a frequently published music journalist, a pre-concert lecturer, and the Composer Advocate at New Music USA where he also serves as the senior editor of the award-winning web magazine NewMusicBox. He has emceed ASCAP’s Thru The Walls showcase in New York City and Meet The Composer’s “The Works” in Minneapolis. Oteri holds a B.A. and a M.A. in ethnomusicology from Columbia University, where he served as classical and world music director for WKCR-FM. His music is published by Transformal Music (ASCAP) and available through ScoreStreet.  More information from http://fjoteri.com/

The two greatest passions in my life have been music and literature. I am endlessly fascinated by literature, and by extension language.  But music is perhaps even more fascinating since it has the power to elicit an emotional response greater than any text ever could, and yet its precise meaning is elusive.

Two years ago, I created music for a song cycle called Versions of the Truth, set to 12 “lines” of verse by 19th-century American novelist Stephen Crane. The music would have been possible, but not likely, to have been written in 19th-century America.  But it opened an aesthetic door that led me to the poetry of Lady Mary Wroth (1587-c.1652), the earliest published female sonneteer. While Wroth’s extremely clever love poetry spoke to me immediately, in the back of my mind I had a lingering fear. Might my musical setting of her words, artifacts from a time and place so far removed from my own, be a kind of cultural/temporal tampering with material that rightfully did not belong to me? But then I came across a remarkable webcast called “Hark! The Acoustic World of Elizabethan England” which attempted to recreate the sound world of that era as a radio documentary.

When Francisco J. Núñez asked me to create a piece for the Young People’s Chorus of New York City, for “Radio Radiance,” it seemed like an invitation to continue walking through that aesthetic door by attempting my own radio-inspired musical time machine, Love Games, for which I chose three of Wroth’s poems:  two sonnets and a song.  None of them had titles in Wroth’s original manuscript, so I made up my own—The Child, The Juggler, and The Conundrum. Aside from those three being my favorites, they were also among the few poems Wroth wrote that were not written from a first person perspective, and it seemed more natural and believable to me for a chorus not to sing “I, my, mine, me” etc.  But since I wanted to magnify that these words were written by a woman, I chose to set them all exclusively for female voices.

Why did you accept this Radio Radiance commission and how did you decide what to compose?

As Frank J. Oteri describes in his notes above, accepting this commission from the Young People’s Chorus of New York City for its Radio Radiance broadcast/digital new music series gave him the opportunity to further explore the creation of a 21st-century sound world for poetry written in the 16th or 17th century, something that he felt would be fascinating and illuminating, especially to today’s young people.

The Texts for the Three Poems by Mary Wroth:

“The Child”
Love, a child, is ever crying;
Please him, and he straight is flying;
Give him, he the more is craving,
Never satisfied with having.
His desires have no measure;
Endless folly is his treasure;
What he promiseth he breaketh;
Trust not one word that he speaketh.
He vows nothing but false matter;
And to cozen you will flatter;
Let him gain the hand, he’ll leave you
And still glory to deceive you.
He will triumph in your wailing;
And yet cause be of your failing:
These his virtues are, and slighter
Are his gifts, his favors lighter.
Feathers are as firm in staying;
Wolves no fiercer in their preying;
As a child then, leave him crying;
Nor seek him so given to flying.

“The Juggler”
Love like a juggler, comes to play his prize,
And all minds draw his wonders to admire,
To see how cunningly he, wanting eyes,
Can yet deceive the best sight of desire:
The wanton child, how he can fain his fire
So prettily, as none sees his disguise!
How finely do his tricks, while wee fools hire
The badge, and office of his tyrannies,
For in the end, such juggling he doth make
As he our hearts, instead of eyes doth take
For men can only by their slights abuse
The sight with nimble, and delightful skill;
But if he play, his gain is our lost will:
Yet childlike, we cannot his sports refuse.

“The Conundrum”
Can pleasing sight misfortune ever bring?
Can firm desire a painful torment try?
Can winning eyes prove to the heart a sting?
Or can sweet lips in treason hidden lie?
The Sun most pleasing blinds the strongest eye
If too much look’d on, breaking the sight’s string;
Desires still crossed must unto mischief hye,
And as despair, a luckless chance may fling.
Eyes, having won, rejecting proves a sting
Killing the bud before the tree doth spring;
Sweet lips not loving do as poison prove:
Desire, sight, Eyes, lips, seek, see, prove, and find
You love may win, but curses if unkind;
Then show you harm’s dislike, and joy in Love.