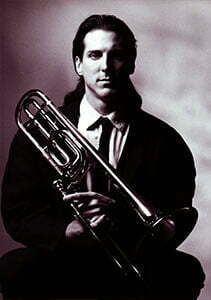 Kevin James is a noted composer, performer, educator and writer. His broad palette ranges from free jazz and improvisational works, audience participation and multi-media to traditional forms and modal harmonies, and his works have been performed by many of today’s premier ensembles.

Mr. James is one of a new breed of classically trained but socially concerned composers.  For example, his Horobi No Naka Kara, commissioned by the Young People’s Chorus of New York City, was premiered by the chorus in Hiroshima on the 60th anniversary memorials of the city’s bombing; and his choral composition In Complexu Pacis received honors in the worldwide Waging Peace choral music competition.  For his Meet The Composer/New Residencies commission, The Portraits Project, a 90-minute multimedia “opera lingua” on the theme of homelessness, he recorded over 700 interviews with homeless New Yorkers.

For two years Mr. James traveled extensively, gathering field recordings of the last remaining speakers of four nearly extinct languages—Quileute, Dalabon, Jawoyn, and Hokkaido Ainu— for use in a series of five long-form, electro-acoustic and multi-media works developed on commission from Elisa Monte Dance, the string quartet ETHEL, the Fulcrum Point New Music Project, and Speak Percussion. Jawoyn Dreamscape, performed by Fulcrum Point was among Chicago Classical’s top ten performances of 2011. The remaining works will be premiered in New York and San Francisco in spring 2013.

An alumnus of Depauw University, he has received awards and grants from the American Composer’s Forum, Jerome Foundation, NEA, Meet the Composer, New York State Council on the Arts, American Music Center, among many others.  In 2009, he was one of five American artists awarded a JAPAN-US Friendship Commission Fellowship to pursue work on his Vanishing Languages Project. Mr. James was recently named the director of education of the American Composers Orchestra where he will be working to increase the visibility and impact of composers in arts and education in New York City. Mr. James directs and performs with the [kāj] Ensemble, a collective of New York’s finest and most daring improvising musicians.

“Colors is an ebullient expression of the swirling thoughts of a child’s mind. Written for the YPC mixed chorus, Colors carries the group firmly into the 21st century through the use of live audio processing. The work opens with the choristers executing sound effects drawn from individual letters, while two of the choristers man laptops to capture live samples of their singing. As the piece continues, those samples are altered using a palette of audio tools and delivered back to the audience, now as accompaniment to the more traditional singing of the chorus. The piece finishes with a clincher, as the chorus reassembles the letter sounds from the opening, completing the piece’s single lyric.”