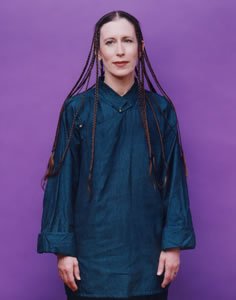 Meredith Monk is a composer, singer, director/choreographer and creator of new opera, music theater works, films and installations. A pioneer in what is now called “extended vocal technique” and “interdisciplinary performance,” Monk creates works that thrive at the intersection of music and movement, image and object, light and sound in an effort to discover and weave together new modes of perception.

Her groundbreaking exploration of the voice as an instrument, as an eloquent language in and of itself, expands the boundaries of musical composition, creating landscapes of sound that unearth feelings, energies and memories for which we have no words. During a career that spans more than 40 years, the MacArthur Genius Award recipient has been acclaimed by audiences and critics as a major creative force in the performing arts.

About “Three Heavens and Hells”

The text for this piece is taken from Electric Chocolate written by Tennessee Reed (whose father is the author Ishmael Reed). Meredith Monk chose “Three Heavens and Hells,” written when Tennessee was 11, because it gave her “space to work with my own rhythms and phonemes as well as an intriguing set of images to play with. I’ve always believed that the voice itself is a language, which speaks more eloquently than words.” This is Meredith Monk’s first composition using words (she has historically only worked with the voice without text).

“Since 1965, I have been composing music for the voice as an instrument. I’ve always believed that the voice itself is a language, which speaks more eloquently than words. But when my friend Carla Blank, who co-directed the children’s dance troupe of Roberts + Blank Dance Theatre, asked me to create music composed to children’s poetry, I became intrigued by the idea of setting music to text. Carla gave me a book of poems entitled Electric Chocolate written by her daughter, Tennessee Reed. I chose “Three Heavens and Hells,” written when Tennessee was 11, because it gave me space to work with my own rhythms and phonemes as well as an intriguing set of images to play with. I thought the poem was both whimsical and profound. For example, what would ‘Things heaven and hell’ be like? I just let my imagination fly.

“Though I originally scored “Three Heavens and Hells” for four female voices, I always wanted it to be sung by a children’s chorus. When the Young People’s Chorus of New York City commissioned me to write a piece, I was excited by the idea of making a new form with the material. Working with Francisco Núñez and the young singers has given me the opportunity to create different colors and textures, expand my original conception and develop it into a new entity.”