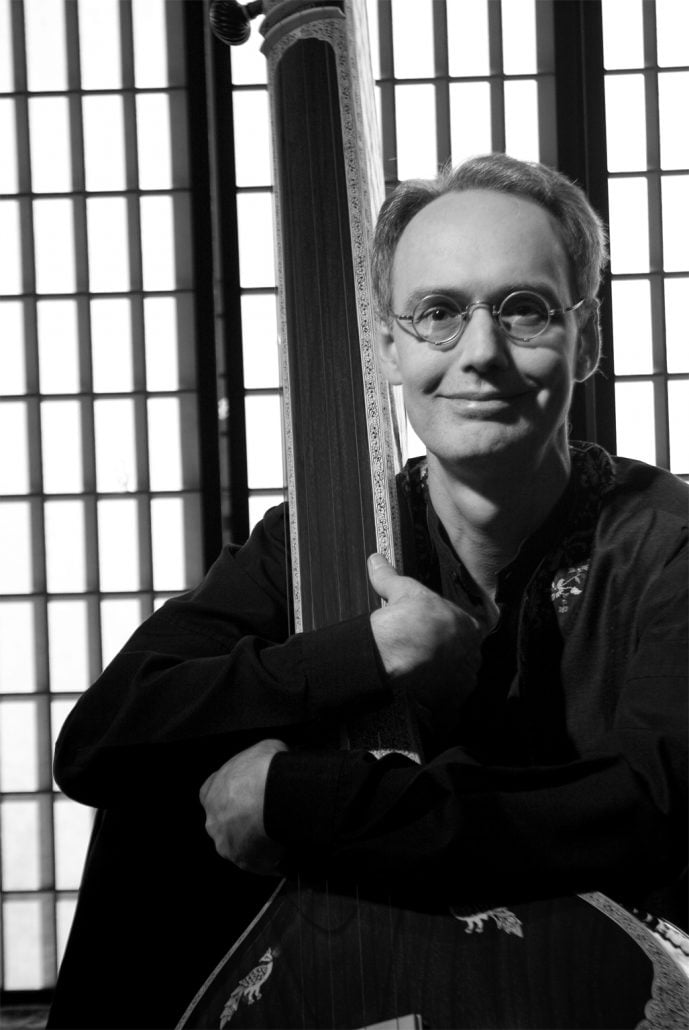 Composer/pianist Michael Harrison has been called “an American Maverick” (Philip Glass). With an expertise in Indian ragas, rhythmic cycles, and an innate gift for melodic composition, he has developed one of the most distinctive musical styles of our time. On the path to discovering his voice as a composer, Mr. Harrison began his profession as an improvising keyboardist and was a protégé of La Monte Young and a disciple of the late Pandit Pran Nath, the renowned Indian classical voice master who awakened Harrison’s ears to the beauty of just intonation. The New York Times wrote that Harrison’s lifelong immersion in both Western and Indian classical music created “a new harmonic world…of vibrant sound.” Through his adaptation of Pythagorean principles of harmonic resonance to create new tunings and scales, Mr. Harrison composedRevelation: Music in Pure Intonation, a groundbreaking composition that showcases one of his specialized tunings for conventional piano utilizing “celestial commas.”  It was released on the Cantaloupe Music label in 2007 and named as one of the Best Classical Recordings of that year by The New York Times, the Boston Globe and Time Out New York.  Mr. Harrison believes that Hijaz, a major work composed for cello, just intonation piano and the Young People’s Chorus of New York City™ reveals a whole new side of his musical persona. Following the premiere of Hijaz this evening, the work will be repeated at the Bang on a Can Marathon on June 19 as a part of the River to River Festival.  Michael Harrison’s newest work, a piece for cellist Maya Beiser, Just Ancient Loops, is for multiple-prerecorded tracks and solo live cello, and along with Hijaz will be recorded by Cantaloupe Music for release in 2012.

Commissioned by the Young People’s Chorus of New York City™
World Premiere, May 6, 2011 at the 92nd Street Y in New York City

“It is an honor to compose for such dedicated and extraordinary musicians as the Young People’s Chorus of New York City, Francisco Núñez and Maya Beiser.

“My intention while composing Hijaz was to invoke a sense of pilgrimage, either to a wondrous, natural or holy place, or metaphorically to a sacred place within us.  On this imaginary journey the chorus, as a unified whole, represents the soul of the journeyer. The melismatic melodies are meant to give a sense of the searing sun and wind amongst the desert and mountainous landscapes. The pulsing rhythms trace our footsteps, and those of our camels or horses, as we make our way on the path of self-discovery. The text is comprised of vowels, South Indian rhythmic and tabla syllables, and a universal prayer that I composed for the work.

“Hijaz is one of the oldest and most prevalent modes in use in the Middle East and North Africa, with a reach spanning from Andalusia to India, and even used in seminal jazz recordings of Miles Davis “Sketches of Spain” and Chick Corea “Spain”.  Wikipedia describes the hijaz mode as follows: The Phrygian dominant scale, also called harmonic minor perfect fifth below (in jazz) or hijaz (in Arabic music), is constructed by raising the third of the Phrygian mode and is the fifth mode of the harmonic minor scale, the fifth being the dominant. It has the word “dominant” in its name because like the dominant seventh chord it has a major 3rd note and a flattened 7th note.  It is often known as a Spanish Phrygian scale or Spanish gypsy scale, and is commonly used in flamenco music. It is also known as Ahava Rabboh or Freygish when used in Hebrew prayers and Klezmer music (earning it the additional title of the Jewish scale), or as the Hijaz maqam when used in Turkish or Arabic music.

“The work is composed using a variant of the ancient tuning system known as ‘just intonation,’ or pure tuning, which is the universal foundation for harmony as constructed from musical intervals of perfect mathematical proportions.  Pythagoras and other ancient Greek philosophers and mathematicians discovered that musical harmonies arise from mathematical relationships based on whole numbers.  The most consonant harmonies are created when two membranes vibrate in simple musical proportions, for example, the two notes comprising an octave have a 2:1 relationship, where the higher note is vibrating exactly twice as fast as the lower note.  A perfect fifth is a 3:2 relationship, a perfect fourth is 4:3, a pure major third is 5:4, and so on.  Every different whole number ratio corresponds to a different musical interval.  Because there are an infinite number of whole number ratios there are also infinite matrixes of tones waiting to be explored.

“Just intonation is the basis for the music of ancient Greece, as well as many other cultures, including those of India, Persia, China, and Japan.  Just intonation is also vital to the ‘a cappella’ music of the West, from Gregorian chant and renaissance polyphony, to ‘barbershop’ harmonies.  Over the centuries the purity of these natural musical proportions was gradually compromised (tempered) to facilitate chord changes and modulation between various key relationships.  This culminated in a tuning, called equal temperament, which has become the standard for the piano and most Western fixed pitch instruments.  Equal temperament divides the octave into 12 equal half steps, like dividing the face of a clock into twelve hours.  The result is a musical democracy in which ‘all tones are created equal,’ however this distorts the natural hierarchy of the tones as produced in just intonation by compromising the purity of tuning and fundamental principles of harmony.” (Michael Harrison)