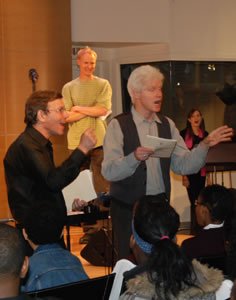 For almost 20 years Rob Kapilow has brought the joy and wonder of classical music to audiences of all ages and backgrounds in concert halls throughout the U.S. and Canada. Characterized by his unique ability to create an “aha” moment for his audiences and collaborators. Kapilow’s work brings music into people’s lives: opening new ears to musical experiences and helping people to listen actively.

Kapilow’s range of activities is broad, and include his What Makes It Great?® presentations, his family compositions and FamilyMusik® events, and his Citypieces, which involve entire communities in conceiving and creating new pieces of music. His most ambitious Citypiece—“Summer Sun, Winter Moon” with a text by Blackfeet tribal member Darrell Robes Kipp—commemorated the bicentennial of the Lewis and Clark expedition.

Among his recent compositions are: “Jabberwocky,” for chorus and chamber ensemble; based on the Lewis Carroll poem; “Paddywak: A Tap Dance Concerto,” premiered by Ayodele Casel at a What Makes It Great?® program at Lincoln Center, and “Crosstown M42,” a collaboration with mouth sounds artist Fred Newman, commissioned by the Young People’s Chorus of New York City™ for its Radio Radiance™ series.His music is published exclusively by G. Schirmer.

Kapilow, who was music director of the Yale Symphony Orchestra for five seasons, has also conducted many new works of musical theater, ranging from the Tony Award-winning “Nine”on Broadway to the premiere of “Frida” for the opening of the Brooklyn Academy of Music’s “Next Wave Festival” and premieres of works for American Repertory Theater.

Kapilow has been recognized with numerous awards and grants, including a first place win in the Fontainebleau Casadesus Piano Competition and second-place in the Antal Dorati Conductor’s Competition. Kapilow is a recipient of an Exxon “Meet-the-Composer” grant, numerous ASCAP awards, and was the first composer to be granted the rights to set Dr. Seuss’s words to music.  Kapilow lives in River Vale, NJ, with his wife and three children.

Once a freckled-faced, snaggled-toothed kid making sounds behind teachers’ backs, Fred grew up with storytellers in small Georgia town. He eventually grew up and ventured overseas, working for awhile as a street busker, blacksmith and then carpet salesman. He tried to go legit, graduating from Harvard Business School and working with Newsweek magazine.  He was first heard on A Prairie Home Companion as a guest in 1980 as author of his first version of Mouthsounds.

He went on to work as an actor, a writer, and a fairly inept puppeteer with Jim Henson.  He hosted many shows for Nickelodeon and Disney (including the New Mickey Mouse Club), creating voices, music, and sound effects for the long-running Nickelodeon and Disney cartoon series “DOUG,” going on to win Aces, Emmys, Peabodys, Clios, blah, blah…

Fred is the touring sound effects-guy for A Prairie Home, and can be seen daily on public television’s reading show “Between the Lions.”.

His brand new book and CD/CD-ROM of MouthSounds has just been published.

He lives in New York and Connecticut with his wife and two children, a cat, and two surly parakeets. They are all loud.

“Crosstown M42”, a uniquely original work for chorus, takes the listener on a virtual bus ride from the Hudson River on the West Side of Manhattan to the East River.  A fast-paced multicultural odyssey through New York City’s everyday life and culture, “Crosstown M42” explores the symphony of sound in the world around us and brings it right to our door. Beginning with sounds of the wind and seagulls on the Hudson River, the listener is taken on a journey past Port Authority, through Times Square and Bryant Park all the way to the East River. Each stop contains a snapshot, or rather an earshot, of the amazing city sounds that are all around us.

The combination of Newman’s sound effect techniques and Kapilow’s inventive musical skill have been harnessed to create the music of everyday sounds—screeching brakes, cooing pigeons, the jibber-jabber of passengers, cell phones, car horns, passing sirens, bus announcements, the rumble of the engine—whereby the aural fabric of the surrounding environment becomes music.  Complete with beat boxing, steel drums, sitar playing and even every child’s favorite, “the Wheels on the Bus,” it is an exciting piece that will captivate every listener.

For the composers, the creative process began by simply riding a bus together and bringing along a handheld digital recorder.  Newman turned these recorded sounds into a soundtrack of his own making.  Kapilow then wrote music tracks to go along with what Newman had recorded.  In the finished product, the choristers sing the music and thanks to Newman’s coaching, make all of the sound effects themselves.

For Kapilow and Newman, the mantra of this collaboration is a twist on a phrase all New Yorkers will recognize:  “if you see something, sing something.”  Ultimately, the two collaborators hope that anyone who hears this piece will remember “There’s a piece of music happening every second, if you only listen.”