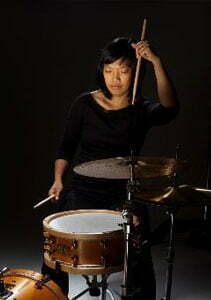 Known for her innovative style and cultural dialogue as a composer, improviser, percussionist and humanitarian, Susie Ibarra is interested in the intersection of tradition and avant-garde and how this informs and inspires interdisciplinary art, education and public service. In recent years Ms. Ibarra has been developing composition and improvisation that blends traditions and crosses rhythms and tunings of Asia Pacific, Middle East, Americas, Europe and Africa. She remains active in her practice of Philippine indigenous music – electronic, experimental, jazz and improvisation. In 2009 Ms. Ibarra co-founded Song of the Bird King to foster multi-media art and humanitarian and environmental work that contributes to preservation and innovation in indigenous communities and children’s education. With Roberto Rodriguez she leads Mundo Niños, a children’s world music group, which teaches and performs music with children from elementary to high school. She performs, archives and teaches in North America, Europe, Asia Pacific and the Middle East.

Ms. Ibarra is a 2010 TED Fellow and Asia 21 Delegate, and recipient of a 2008 Asian Cultural Council /Rockefeller Fellowship, which has supported her work in Philippine indigenous music, ecology, and public service projects. This year Ms. Ibarra joined the faculty of Bennington College in the Music Department and Center for Advancement of Public Action CAPA.

In The City, a place where so many things happen simultaneously, the world is dreaming itself back to its origins of stars and stardust.  There is room for all of this to happen at once.  Essentially in the city we are always nudging each other, but at the same time there is this incredible aloneness. The City is dreaming itself back through earth’s history to eternity.

Susie Ibarra composes a spiritual of celestial sounds in The City for Young People’s Chorus of New York City. Inspired by contemporary and folkloric traditions, Ms. Ibarra explores acoustic and electronic vocals and percussion with the chorus. A longtime collaborator with Ibarra, American Pulitzer Prize-winning poet Yusef Komunyakaa has written the lyric for The City.