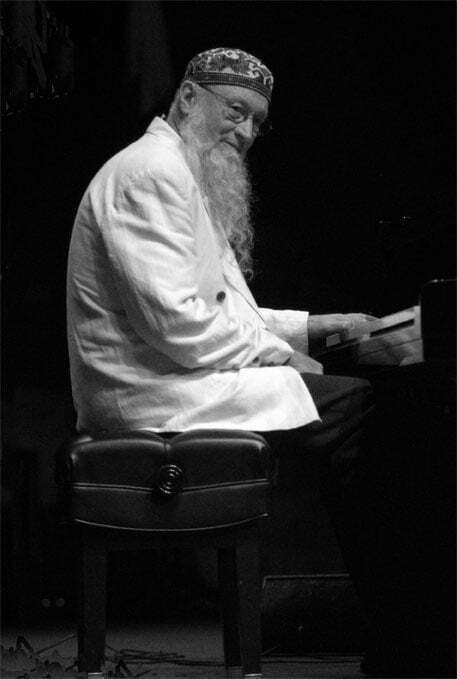 Composer and performer Terry Riley is one of the founders of music’s minimalist movement. His early works, notably In C), pioneered a form in Western music based on structured interlocking repetitive patterns. The influence of Mr. Riley’s hypnotic, multi-layered, polymetric, brightly orchestrated Eastern-flavored improvisations and compositions is heard across the span of contemporary and popular music by performers who have commissioned and/or played his works, such as Kronos Quartet, Rova Saxophone Quartet, John Zorn, Sarah Cahill, California E.A.R. Unit, bassist Bill Douglass, the Assad brothers, cello octet Conjunto Ibérico, Crash Ensemble, Bang-on-a-Can All Stars, the Koussevitzky Foundation, classical  music institutions such as Carnegie Hall, and performing arts centers.  After the California native earned an MA in composition at UC Berkeley and spent two years in Europe, where he was involved in street theater and happenings, he moved to New York and began collaborating with such influential thinkers as La Monte Young, whose radical approach to time made a big impact on him. He also became a disciple of master of Indian classical voice, Pandit Pran Nath, with whom Riley appeared as tampura, tabla and vocal accompanist for 26 year until Nath’s passing. Riley continues to perform concerts of Indian classical music, as well as conducting raga-singing seminars. In 1971 Riley joined the Mills College faculty, where he and David Harrington of the Kronos Quartet began a long association, including Riley’s epic five-quartet cycle, Salome Dances for Peace, which was nominated for a Grammy and selected as “Classical album of the year” by USA Today.

About “Another Secret eQuation”

“Another Secret eQuation” is dedicated to the memory of prominent physicist Hans Sigmann – the project director at the Stanford Linear Accelerator Center and the husband of Katrina Krimsky, who performed the pulse both on the world premiere recording of “In C” in 1968 as well as during the all-star Carnegie Hall performance of “In C” organized by Kronos last season.  The composition is in three sections and features a text written by Riley and sung at this performance by the Young People’s Chorus of New York City™, who also participated in the 2009 “In C” extravaganza.  According to Riley:

“I wrote the text keeping in mind that young people would be singing, and that the ideas expressed would gently address the actions of their elders and the overwhelmingly messy world the kids were being handed.  The third section offers up some nonsense syllables as a possible antidote to the gobbledygook that poses as wisdom from some of our esteemed leaders.”

The piece is a co-commission by Young People’s Chorus of New York City™ and Kronos Quartet.