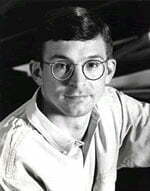 Born in Charleston, South Carolina, Thomas Cabaniss writes for opera, theater, dance, film, and the concert stage. Among his recent works are three new orchestral commissions for Orchestra of St. Luke’s and Carnegie Hall’s Link UP! Program (2010-2012), a cappella works for the Young People’s Chorus of New York City andan oratorio for singers, musicians, and actor.  His choral work, Behold the Star, is published by Boosey & Hawkes and available on New World Records. He has also served as composer-in-residence and conductor for the American Dance Festival’s Young Choreographers & Composers Program, and his dance works have been performed at venues that include Danspace, the American Dance Festival, the Joyce Theater, and Central Park Summerstage. In 1990 he created the score for The Lunch Date (winner of the Academy Award and Palme D’Or for Best Short Film).

Mr. Cabaniss has been on the faculty of The Juilliard School since 1998, where he teaches in the dance and music divisions.  Active in arts education, he served as music animateur for the Philadelphia Orchestra under Christoph Eschenbach and director of education for the New York Philharmonic under Kurt Masur and Lorin Maazel, where with bassist/composer Jon Desk he founded the Very Young Composers Program.  He has led workshops on musical creativity for Carnegie Hall/Juilliard Academy fellows and designed and led creative projects for Carnegie Hall involving students from New York City high schools.  Current work includes songwriting workshops for HIV-affected teens at Jacobi Hospital in the Bronx and for adults in senior centers and homeless shelters. Since 1994 he had volunteered at P.S. 199 in Manhattan, helping students to create their own musical compositions.

Mr. Cabaniss, the recipient of an ASCAP Foundation Award for Arts Education, received a 1998 Obie Award and Drama Desk nomination for his score and musical direction for Mamba’s Daughters.   He has written articles on arts education for Teaching Artist Journal and writes a column for Chamber Music Magazine called The Teaching Artist. He has served as a consultant for the Lincoln Center Institute, the Metropolitan Opera Guild and Carnegie Hall.

Celestial Fire was commissioned for the 2012-13 season by Francisco J. Núñez and the Young People’s Chorus of New York City for their Radio Radiance program, a collaboration with WWFM. It is written for SATB (or SSA) and live looping technology. It uses a text by the 7th century Hebrew poet Yannai, which has been adapted by the composer.

Now an angel appeared
In a blazing fire –

a fire that billows
like palm branches
a fire whose sparks
are bolts of lightning
a fire black
as raven wings
and rainbow-colored songs it sings: