Bringing together over 1,000 young choristers from 16 schools, the Young People’s Chorus of New York City® (YPC) presents its annual, year-end concert for the citywide YPC School Choruses Program, staging this year’s performance at Harlem’s legendary Apollo Theater on Monday, May 15, at 10:45 a.m. The program is directed year-round by YPC Associate Artistic Director Elizabeth Núñez, and the upcoming concert showcases the musical growth of its participants—New York City public school students—over the course of the school year, during which YPC-trained music educators teach them how to read and write music, sing with healthy vocal technique, and perform as a group. The concert program, The Tales We Tell, celebrates the diversity of New York City with songs from the Americas, Africa, and Europe interspersed with acting, dancing, and poetry by artists from The Classical Theatre of Harlem. YPC Assistant Conductors and Conducting Fellows lead the musical performances. 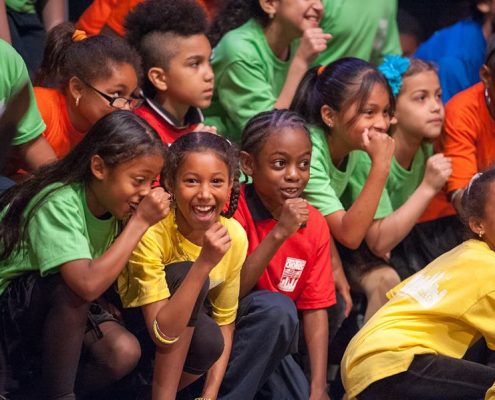 Tickets priced at $10 are available tomorrow (Wednesday, May 3) at 12:00 p.m., via the Apollo Theater Box Office, web site, or Ticketmaster.

“At a time when more and more Americans are realizing the importance of an early and vigorous arts education for all schoolchildren, these young artists are eager to stand up and demonstrate the value of the arts in their lives,” says YPC Founder and Artistic Director Francisco J. Núñez.

The young student artists in YPC’s School Choruses Program have been rehearsing the repertoire for the May 15 concert as part of their regular, in-school program activities, with each school contributing a unique musical story to The Tales We Tell. The interludes by The Classical Theatre of Harlem that complement the musical performances were choreographed by Tiffany Rae-Fisher, Artistic Director of Elise Monte Dance. The Classical Theatre of Harlem is led by Producing Artistic Director Ty Jones.

Support for this program has been provided by the National Endowment for the Arts and the Andrew Lloyd Webber Foundation, as well as the Barker Welfare Foundation, Bay & Paul Foundations, Javis and Constance Doctorow Family Foundation, and Lanie & Ethel Foundation.

The Young People’s Chorus of New York City® (YPC) is a world-renowned youth chorus founded in 1988 on a mission of diversity and artistic excellence by Artistic Director Francisco J. Núñez, a MacArthur Fellow. While harnessing the power of music to fulfill the potential of children, the program has heightened an awareness of the ability of children to rise to unforeseen levels of artistry. YPC receives invitations to perform on four continents, has won over a dozen gold medals in international choral competitions, and has invigorated the repertoire for young voices by commissioning and premiering over 100 compositions from today’s most distinguished composers. YPC is a recipient of the National Arts and Humanities Youth Program Award, America’s highest honor for youth programs.

Tickets priced at $10 are available tomorrow (Wednesday, May 3) at 12:00 p.m., via the Apollo Theater Box Office, web site (https://www.apollotheater.org/), or Ticketmaster (click here after noon tomorrow).