Supporters, Guest Artists and Choristers Come Together at Gala Concert and Benefit 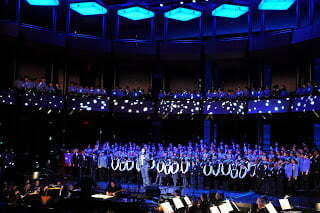 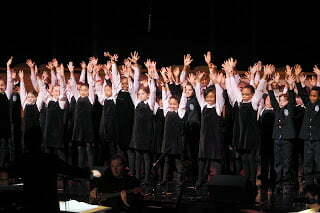 On Monday, March 15 all divisions of the YPC joined special guest artists The New York Pops, Sean Bradford, Maurice Hines, Robert Kapilow, New York Voices and Dafnis Prieto for an evening of song and celebration at It’s Up To You, New York, YPC Shaping Lives Through Music, A Gala Concert and Dinner benefiting the programs of YPC. Sean Bradford, YPC and The New York Pops started the evening with John Legend’s If You’re Out There and concert guests enjoyed a compilation of music celebrating New York that included classics like Uptown Girl, On Broadway, Boy from New York City and The 59th Street Bridge. YPC Choristers were joined by Satellite Schools PS 75, PS/IS 178Q and PS 1. The Prelude Division joined New York Voices for a swinging version of Sing, Sing, Sing and the musical event showcased the extraordinary talents of all the choristers and guest artists with music like Trio Absolute featuring Dafnis Prieto and Si O Si Quartet and Crosstown M42 with choristers alongside Composer Rob Kapilow. Maurice Hines and the Manzari Brothers tapped out a lively rendition of It Don’t Mean A Thing. The evening ended with a magical moment when all divisions joined together to sing John Lennon’s Imagine. Mr. Holcomb Noble and Toyota were honored at the dinner which followed the concert. Funds raised at the event help support the programs that serve more than 1100 children who participate annually.

Choristers speak out about the gala – fun performing with each other and...
Scroll to top