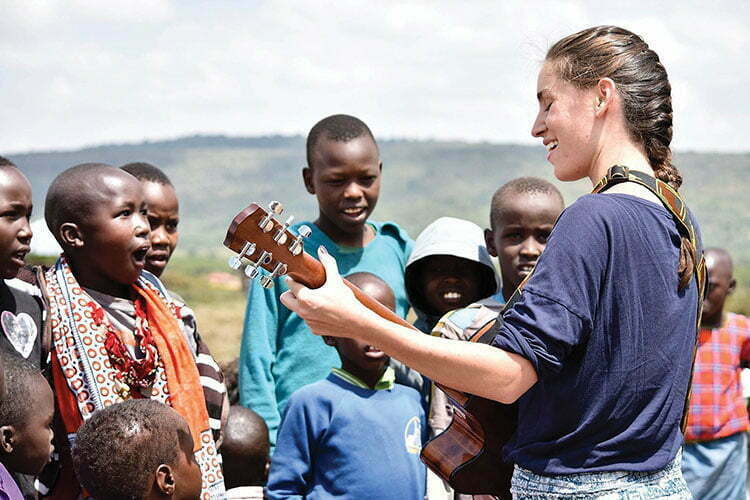 Music is one of the most amazing forms of art. It has the ability to stir many different emotions like happiness, sadness, love and anger. Music can also instill confidence, inspiration and motivation in people. In addition to entertainment, music can also be a powerful instrument to assist in healing those who may be injured or sick. Although not yet 30 years of age, Cara Smith of Red Bank has begun an ambitious project, bringing music therapy to aid people on the continent of Africa.

How does a talented Jersey girl end up wanting to help people in Kenya? Part of it stems from her time with the acclaimed Young People’s Chorus of New York City during her high school years at Red Bank Catholic. Blessed with a beautiful voice, and singing since the age of 8, Smith traveled to Manhattan frequently and was exposed to many different cultures and ethnicities. She was fascinated by the young people there and learned much about the backgrounds of her fellow students. After high school, she attended the venerated Berklee College of Music, and earned a bachelor’s degree in music therapy with a minor in psychology. Putting her music therapy career on hold for awhile, Smith auditioned for and won a job as vocalist for Carnival Cruise Lines, allowing her to travel around the world while entertaining the vacationing public. While she loved her years on the high seas, she mentions how singing four hours a night for six nights a week is “pretty rough on the voice.” She was now ready to come home and fulfill her dreams and goals.

While at Berklee, Smith had the chance to travel to Kenya with Global Youth Groove, a Massachusetts based nonprofit organization whose goal is to broaden the musical abilities of young people in Kenya. Her initial motive was to see if music therapy could be used in the Kenyan society to promote the physical healing process. While there, she fell in love with the people and the area, and decided that this would be a great opportunity for her to utilize her talents to help those less privileged. Being so far away from the U.S., Smith knew she couldn’t make a big enough difference by herself; she needed help.

Smith is captivated with ethnomusicology, a study of music in its cultural context. She feels that music therapy would most likely be best administered to a patient in their native tongue or song composition. A singer/songwriter herself, she travels with her acoustic guitar no matter her destination. While she has performed locally in the Red Bank area, and released a CD of original music entitled “Off I Go” in 2014, her biggest reason for choosing her career is that she endeavors to use music for a purpose other than entertainment; she truly wants to make a genuine difference in peoples’ lives.

Smith is proud of the fact that Umoja (the Swahili word for unity) is a self-funded project thanks to many generous benefactors, but an organization is only as successful as the people supporting it. Assistance from private or corporate entities is always welcome and more info is available on their website

Ms. Cara Smith is off to Cleveland in January 2018 to begin a music therapy internship which will lead to her board certification soon thereafter. While there is no doubt that she is focusing on the present right now, her long-term goal of bringing the healing power of music to the world remains as clear as ever.

Read the full article at TwoRiverTimes.com.