Voices at the Festival Review 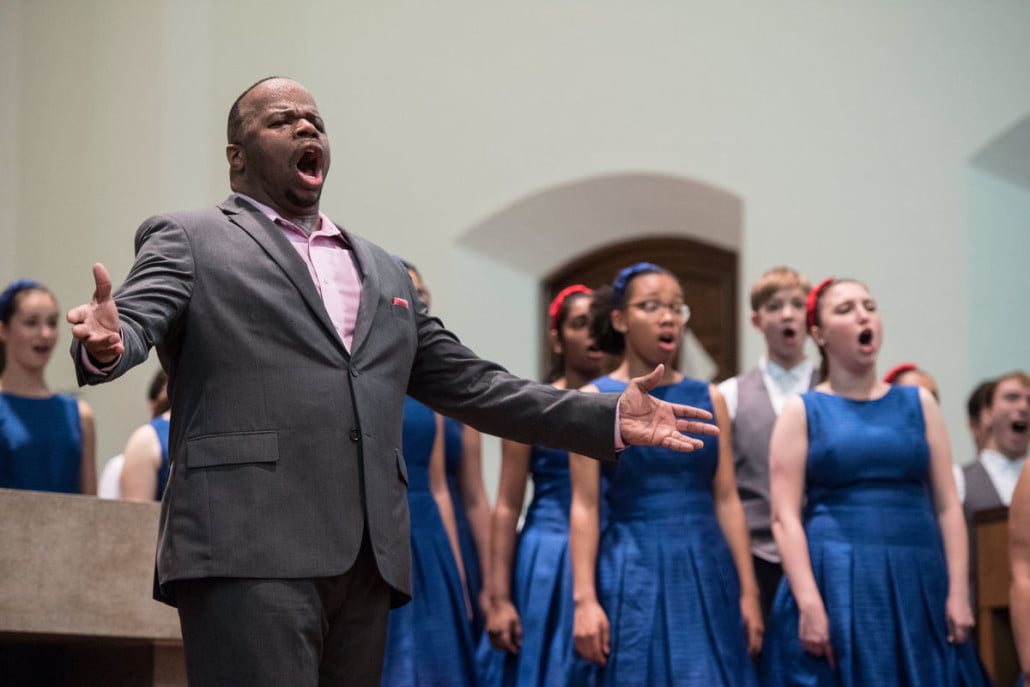 Last Thursday night, millions were listening to Donald Trump accept the Republican nomination for the presidency.

But some of us were listening to a different kind of voice — or voices: Festival Napa Valley’s Thursday concert was American Spirituals with Lester Lynch and the Young People’s Chorus of New York City.

We were in the chapel at the Christian Brothers’ Mont La Salle, which is why one might be tempted to compare the music to that of angels, but no, these were living, breathing, dancing singers, as filled with joy and hope and light as that other presentation was with darkness, fear and gloom.

The Young People’s Chorus performed first. Founded in 1988 “on a mission of diversity and artistic excellence” by MacArthur “genius grant” fellow Francisco J. Núñez, the chorus today has become a model for an inclusive society — more than 1,600 children of different backgrounds, economic, social and academic, participate in its after-school and in-school programs. They’ve performed around the world, and when Pope Francis came to New York, they sang for him, too.

It was interesting to think that most of the kids in today’s choir were probably born around the time of the 2001 terrorist attacks in their city. Fearful? Hardly. There they were in all colors and sizes, filling the serene chapel with their songs that included “Who But I?” from Daniel Brewbaker’s “Out of the Mist,” and Estonian and Brazilian songs as well as an exuberant medley of Gershwin favorites. American spirituals? Absolutely. They tapped into the rich diversity of their country that sings all kinds of songs.

As they concluded the first part of the show with Paul Simon’s haunting “Bridge Over Troubled Waters,” the singers moved down the aisles, surrounding the audience, wrapping the listeners in their music, greeting them, shaking hands, a surpassingly exquisite moment.

While the young singers took a break, Lester Lynch, hailed as “one of the most important Verdi baritones of the 21st century” came out to sing and filled the chapel with his rich, rolling voice — imagine sweet thunder and that is Lynch.

He opened with “Let Us Break Bread Together” — an invitation that I wish more people in Cleveland had considered in their program. His “Joshua Fit the Battle” all but shivered the solid chapel walls, as did his matchless “Amazing Grace.”

He also treated the audience to two traditional spirituals, “Ride on King Jesus” and “Deep River,” before he was joined by the young singers of the chorus.
What a power they created together with the songs “Lord What a Mornin’” and Andrae Crouch’s “My Tribute.”

Lynch led the youth chorus in a resounding encore, “He’s Got the Whole World in His Hands,” by which time they had the whole audience in their hands.

The choice of voices offering more beauty continued on Sunday as the 10-day Festival Napa Valley concluded with a gala, featuring two bright stars of opera, mezzo-soprano Isabel Leonard — “acclaimed for her passionate intensity and remarkable vocal beauty” — and Michael Fabiano, who apparently has won so many awards he is now, according to program notes, “considered one of the greatest tenors in the world today.”
Few would have quibbled with this after listening to the program, performed at Lincoln Theater with the Festival Orchestra conducted by Carlo Ponti. It was sheer pleasure, composed of crowd-pleasing favorites, orchestral interludes, solos and duets.

A spritely overture to “La Cenerentola” was the prelude to Leonard’s first solo, “Una Voce Poco fa” from Rossini’s “Barber of Seville.” Later she sizzled as she performed the “Habanero” from “Carmen.”
Fabiano’s first solo was the powerful “E lucevan le stelle” from “Tosca,” but he brought down the house (that is, he brought everyone to their feet) with his brilliant “Nessum Dorma” from which he extracted every thrilling note.

Together they shined as they performed duets from Jules Massenet’s “Werther,” Bellini’s “Norma,” and concluded the stellar show with the poignant “O soave fanicuilla” from “La Bohème.” A lovely touch: They wandered off the stage as they were singing the love song of Rodolfo and Mimi, and the last notes came from offstage.
Amid the thunder and roars of applause, they returned to the stage for an encore — the most appropriate love song to the Napa Valley, the drinking song from “Traviata.”

So with my head filled to the brim with glorious voices, I felt fortified to listen to this week’s political convention in Philadelphia.

And Michelle Obama’s opening-night speech at the Democratic Convention was right up there with the angels of the Young People’s Chorus. Sometimes it happens. Even in politics.