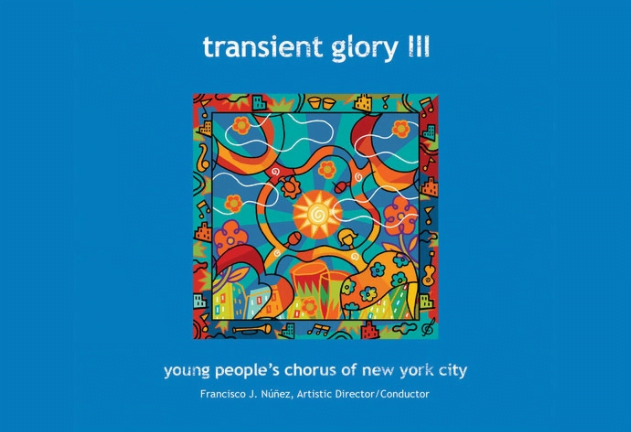 Founder and music director Francisco Núñez brings more than artistry to his leadership of the Young People’s Chorus of New York. He also brings a vision of what a youth choir can be. With their Transient Glory commissioning project, now in its 15th year, the YPC raises the bar for new choral music through consistently well-chosen composer collaborators.

The third in an ongoing series of recordings documenting the project, and the first to be released on Cantaloupe Records, “Transient Glory III” offers a glimpse of what makes the Young People’s Chorus such outstanding interpreters: the solid, elegantly controlled and blended sound one would expect from a mature ensemble, combined with the bold and adventurous energy of youth.

That control allows the YPC to put the focus of these recordings on the writing of some of the most outstanding composers in the United States. One Sweet Morning, the album’s most traditional offering, showcases John Corigliano’s warm, complex tonal harmonies, but Michael Gordon’s Every Stop on the F Train, an austere but nevertheless diverting setting of the names of every subway station along the F-train line, is executed just as ably by the young choristers.

Two legends of American composition, Terry Riley and Meredith Monk, manage to contribute works as rich as Corigliano’s and as forward-looking as Gordon’s, while also managing to tap into the choir’s wild, youthful energy with their peerlessly inventive vocal writing on Monk’s Things Heaven and Hell and Riley’s hefty Another Secret eQuation for YPC and Kronos Quartet. The high-concept electro-acoustics of Bora Yoon’s Semaphore Conductus are as sonically lovely and stylish as they are clever, and Paquito D’Rivera, a giant of Cuban music, turns the choir into an a cappella jazz orchestra with his Tembandumba.

The youth of the performers seems, somehow, to have rubbed off on the works themselves. This is young music—not just a newly composed body of work, but a new repertoire, one that looks to the future, alive and ripe with promise.