Music and movement come together in this program of the world-renowned composer’s choral, duet, and solo works, including the YPC-commissioned choral version of Three Heavens and Hells in its world-premiere complete performance, conducted by YPC Artistic Director Francisco J. Núñez 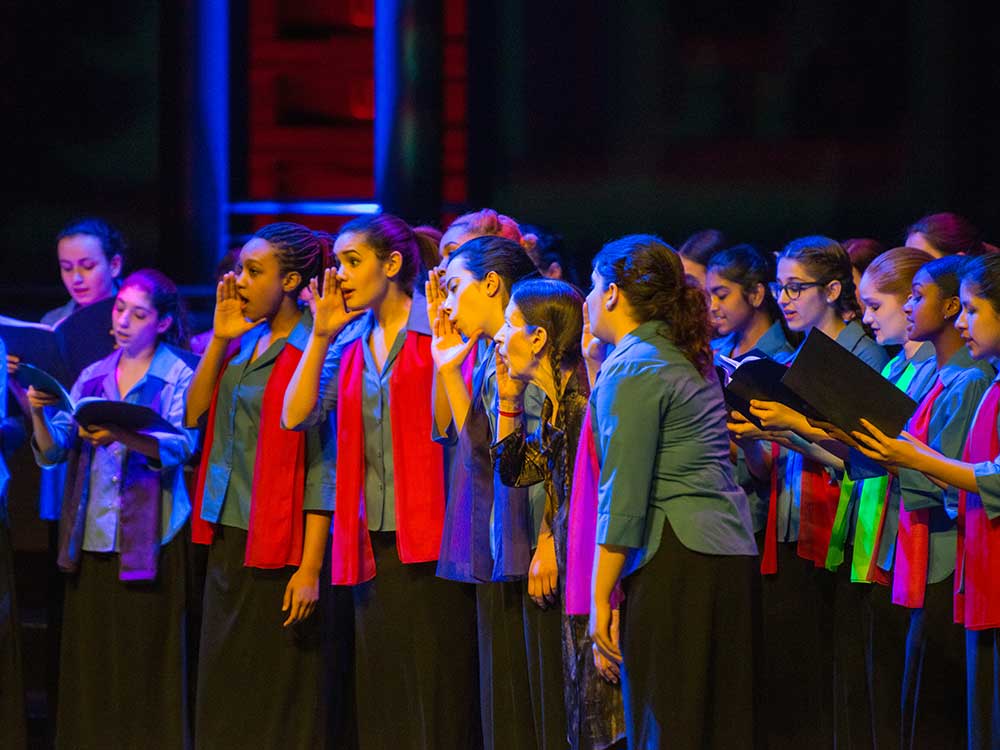 Tickets start at $35 and are available online at WhiteLightFestival.org, by calling CenterCharge at 212.721.6500, or at the David Geffen or Alice Tully Box Office (Broadway and 65th Street).

In the spirit of Ms. Monk’s direct transmission of her work to future generations, Dancing Voices surveys nearly five decades of the composer’s music in an exploration of the human voice as an instrument—from solo to ensemble singing and work with instrumentalists. The program opens with 21 YPC choristers alongside Ms. Monk and Vocal Ensemble members Katie Geissinger and Allison Sniffin in selections from ATLAS: an opera in three parts, Book of Days, and The Games, among other works, in a performance that blends music with choreography and theatrical lighting. The YPC choristers (ages 8-15) are prepared by the chorus’s Associate Artistic Director, Elizabeth Núñez. Ms. Geissinger and Ms. Sniffin are also coaching the group, and Ms. Monk will work directly, hand in hand with them this October. This first part of the program, sung mostly a cappella, was initially conceived and performed in Belgium in 2010 under the title Dancing Voices.

The second part of the program is led by YPC Artistic Director and Founder Francisco J. Núñez, who conducts 50 girls from the chorus in the world-premiere complete performance of Ms. Monk’s Three Heavens and Hells in its YPC-commissioned choral version, followed by “ascent” from Songs of Ascension, in which the girls are joined by 25 boys, three YPC soloists, Ms. Monk and her Vocal Ensemble, the American Contemporary Music Ensemble (Ben Russell, violin; Laura Lutzke, violin; Caleb Burhans, viola; Clarice Jensen, cello), percussionist David Cossin, and wind player Bohdan Hilash.

YPC began working with Ms. Monk in 2009, when the chorus commissioned the choral version of Three Heavens and Hells as part of its Transient Glory and Radio Radiance new music commissioning series. Ms. Monk says:

“Though I originally scored Three Heavens and Hells for four female voices, I always wanted it to be sung by a children’s chorus. When the Young People’s Chorus of New York City commissioned me to write a piece, I was excited by the idea of making a new form with the material. Working with Francisco Núñez and the young singers has given me the opportunity to create different colors and textures, expand my original conception and develop it into a new entity.”

YPC premiered Things Heaven and Hell, a movement from the work, in 2009 at Lincoln Center’s Alice Tully Hall, and this movement was subsequently recorded by the chorus for its 2015 album Transient Glory III. The six additional movements have also been programmed individually by YPC. The White Light Festival performance, featuring new gestural choreography by Ms. Monk, will be sung a cappella by 50 YPC choristers and conducted by Mr. Núñez, marking the first official performance of the choral version in its entirety.

The Young People’s Chorus of New York City is a world-renowned youth chorus founded in 1988 on a mission of diversity and artistic excellence by Artistic Director Francisco J. Núñez, a MacArthur Fellow. While harnessing the power of music to fulfill the potential of children, the program has heightened an awareness of the ability of children to rise to unforeseen levels of artistry. Over 1,600 children from ages 8 to 18 participate annually in YPC through its after-school, in-school, and community programs. YPC’s repertoire ranges from renaissance and classical traditions to gospel, folk, pop, contemporary, and world music. YPC has performed on four continents, has won over a dozen gold medals in international choral competitions, and has invigorated the repertoire for young voices by commissioning and premiering over 100 compositions from today’s most distinguished composers. YPC is a recipient of the National Arts and Humanities Youth Program Award, America’s highest honor for youth programs. For more information, visit ypc.org.

Meredith Monk is a composer, singer, director/choreographer and creator of new opera, music-theater works, films and installations. Recognized as one of the most unique and influential artists of our time, she is a pioneer in what is now called “extended vocal technique” and “interdisciplinary performance.” Celebrated internationally, Monk’s work has been presented by BAM, Lincoln Center Festival, Houston Grand Opera, London’s Barbican Centre and at major venues around the world. She has made more than a dozen recordings, most of which are on the ECM New Series label, including the 2008 Grammy-nominated impermanence and the highly acclaimed On Behalf of Nature (2016).In 2015 Monk received the National Medal of Arts from President Obama, and over the course of six decades she has received numerous additional honors including the prestigious MacArthur “Genius” Award, two Guggenheim Fellowships, three “Obies” (including an award for Sustained Achievement), two “Bessie” awards for Sustained Creative Achievement, a Doris Duke Artist Award and a Yoko Ono Lennon Courage Award for the Arts. She has also been named an Officer of the Order of Arts and Letters by the Republic of France, one of NPR’s 50 Great Voices and Musical America’s 2012 Composer of the Year. In conjunction with her 50th Season of creating and performing, she was appointed the 2014–15 Richard and Barbara Debs Composer’s Chair at Carnegie Hall. This October, she will be awarded the 24th annual Dorothy and Lillian Gish Prize. For more information, visit meredithmonk.org.

Elizabeth Núñez is the Associate Artistic Director of the Young People’s Chorus of New York City. She is also a conductor, choral clinician, soloist, and founding artistic director of The SoHarmoniums Women’s Choir. At YPC, she created and directs the Cantare chorus and serves as vocal coach for choristers in all six YPC divisions (ages 8–18) in rehearsals, performances, and for international tours. In addition, she is the director of the YPC School Choruses program, which brings YPC’s music education program to more than 1,100 New York City public school children every year, and she created WIT: Women Inspiring Tomorrow, a mentoring initiative bringing YPC’s high school girls together with its alumni and women across varying professions.

Meredith Monk & Vocal Ensemble consists of some of the finest and most adventurous performers active in new music. Founded in 1978 to further expand Ms. Monk’s groundbreaking exploration of the human voice, the Ensemble has received multiple awards and critical acclaim, including a 2008 Grammy nomination for impermanence. Appearing in festivals, theaters and concert halls around the world, Meredith Monk & Vocal Ensemble can also be heard on numerous recordings on the ECM New Music Series label. For more information, please visit meredithmonk.org.

The American Contemporary Music Ensemble (ACME) is dedicated to the outstanding performance of masterworks from the 20th and 21st centuries, primarily the work of American composers. The ensemble presents fresh work by living composers alongside the classics of the contemporary. ACME‘s dedication to new music extends across genres, and has earned them a reputation among both classical and rock crowds. For more information, visit acmemusic.org.

Lincoln Center has become a leading force in using new media and technology to reach and inspire a wider and global audience. Reaching audiences where they are—physically and digitally—has become a cornerstone of making the performing arts more accessible to New Yorkers and beyond. The re-imagination of David Geffen Hall will play an important part in these efforts. For more information, visit LincolnCenter.org.

Lincoln Center is committed to providing and improving accessibility for people with disabilities. For information, call the Department of Programs and Services for People with Disabilities at 212.875.5375.

Tickets start at $35 and are available online at WhiteLightFestival.org, by calling CenterCharge at 212.721.6500, or at the David Geffen or Alice Tully Box Office (Broadway and 65th Street).

For Lincoln Center for the Performing Arts
Isabel Sinistore
isinistore@lincolncenter.org | (212) 671-4195