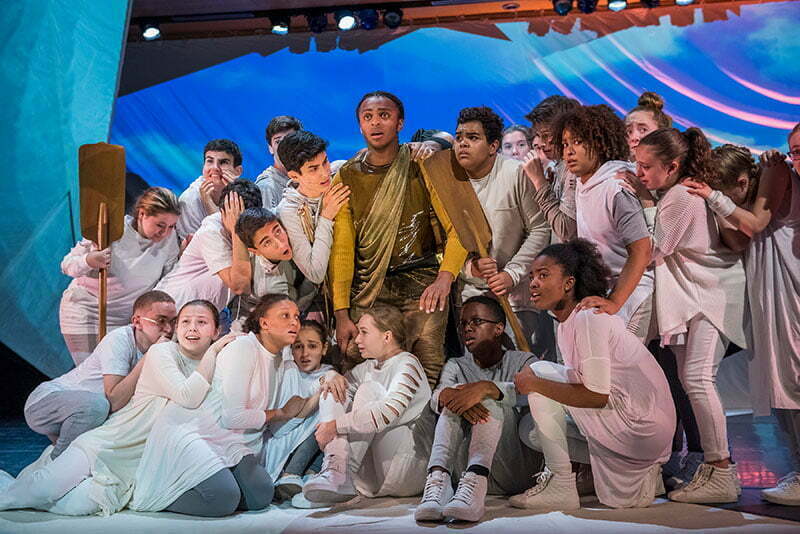 Young People’s Chorus of New York City performs “Odyssey: A Youth Opera” at the Metropolitan Museum of Art on November 3-4 as part of the MetLiveArts series

NEW YORK, NEW YORK (October 16, 2017) —The Young People’s Chorus of New York City (YPC), led by Artistic Director and Founder Francisco J. Núñez, debuts at The Metropolitan Museum of Art in the New York premiere of composer Ben Moore and librettist Kelley Rourke’s Odyssey: A Youth Opera, an hour-long re-telling of Homer’s epic. This new, fully staged and costumed production incorporates video imagery from the Museum’s extensive collection—including images of ancient Greek art and artifacts—to create thematic links to the action on stage. The production is directed and choreographed by Eric Sean Fogel, with video and projection design by S. Katy Tucker. Three performances, presented as part of the Museum’s MetLiveArts series, will be held at The Grace Rainey Rogers Auditorium on Friday, November 3 at 7:00 p.m. and Saturday, November 4 at 2:00 p.m. and 7:00 p.m.

Seven YPC soloists and 32 YPC chorus members, joined by baritone Brian Vu and soprano Meroë Khalia Adeeb, comprise the cast and chorus of Odyssey and are accompanied by a quartet of instrumentalists. The opera was initially commissioned and premiered by The Glimmerglass Festival in 2015, and it depicts the hero Odysseus’s journey home from Troy and the myriad obstacles he faces along the way—from monsters to sirens.

“At YPC, we are always looking for ways to blend music with drama, choreography, and other art forms,” said Francisco Núñez. “When the opportunity arose for us to perform Ben’s stunning opera at The Metropolitan Museum, we thought it would be the perfect work to highlight the vocal excellence of the choristers, while also allowing them to realize their dramatic potential.”

“I’m so excited to be working with Francisco Núñez and YPC on Odyssey,” said Ben Moore. “The level of musicality and vocal beauty they bring to the piece is truly astonishing, and given their theatrical flair, it will be thrilling to see the opera’s story come to life!”

“In this Met-specific restaging of Odyssey: A Youth Opera, the Museum’s extraordinary collection plays a leading role and provides the sets and scenery,” said Limor Tomer, General Manager of Live Arts at The Metropolitan Museum of Art. “Images from the entire collection, including our Greek art collection, will heighten the drama of this wonderful opera. The MetLiveArts series commissions and presents singular experiences, and we’re so excited to feature the extraordinary voices of YPC under the baton of Francisco Núñez on The Met’s stage.”

The Young People’s Chorus of New York City is a world-renowned youth chorus founded in 1988 on a mission of diversity and artistic excellence by Artistic Director Francisco J. Núñez, a MacArthur Fellow. While harnessing the power of music to fulfill the potential of children, the program has heightened an awareness of the ability of children to rise to unforeseen levels of artistry. Over 1,600 children from ages 7 to 18 participate annually in YPC through its after-school, in-school, and community programs. YPC’s repertoire ranges from Renaissance and classical traditions to gospel, folk, pop, contemporary, and world music. YPC has performed on four continents, has won over a dozen gold medals in international choral competitions, and has invigorated the repertoire for young voices by commissioning and premiering over 100 compositions from today’s most distinguished composers. YPC is a recipient of the National Arts and Humanities Youth Program Award, America’s highest honor for youth programs. For more information, visit ypc.org.

Baritone Brian Vu is devoted to visceral and engaging performances of the operatic repertoire. He recently finished two terms as a Pittsburgh Opera Resident Artist and debuts this season with the Houston Grand Opera. He also returns to the Glimmerglass Festival as Riff in Francesca Zambello’s new production of West Side Story, and past performances include selections as Ramiro (L’heure espagnole) with the Santa Fe Opera, Moralès (Carmen) at the Music Academy of the West, and Marquis d’Obigny (La traviata) with the Wolf Trap Opera. He is from Los Angeles and graduated from the Yale School of Music and UCLA. For more information, visit brianvu.com.

Soprano Meroë Khalia Adeeb is a native of Accokeek, Maryland. She began her operatic training at Louisiana State in 2010. With Tri-Cities Opera she has performed Donna Elvira in Don Giovanni, Gilda in Verdi’s Rigoletto, Violetta in La traviata and Mimì in La bohème. At the Glimmerglass Festival she has performed Sarah Good in The Crucible, Berenice in Lost Luggage, and Clara in Porgy and Bess. In addition she also enjoys competing, having won prizes in such competitions as the Deborah Voigt/Vero Beach Opera Competition, Annapolis Opera competition, and PARTNERS for the Arts competition, among others. For more information, visit meroesings.com.

The music of American composer Ben Moore has been performed by many leading singers including soprano Deborah Voigt; mezzo-sopranos Susan Graham, Frederica von Stade, and Isabel Leonard; tenors Lawrence Brownlee and Robert White; baritone Nathan Gunn; and six-time Tony winner Audra McDonald. In addition to Odyssey, he has composed two operas: Enemies, a Love Story for Palm Beach Opera in 2015, to appear at Kentucky Opera in 2018, and youth opera Robin Hood for the 2017 Glimmerglass Festival, to appear at Seattle Opera in 2018. He is also a composer of art songs, musical theatre, cabaret, and other genres, and his works have been recorded by Lawrence Brownlee, Susan Graham, Nathan Gunn, and Deborah Voigt, among others. For more information, visit mooreart.com.

Eric Sean Fogel is a director and choreographer whose work this season can be seen in Candide at LA Opera and Washington National Opera (Kennedy Center), West Side StoryatHouston Grand Opera, The Cunning Little Vixen at The Glimmerglass Festival, and Norma at the Metropolitan Opera. He has an eight-year collaboration with Francesca Zambello and The Glimmerglass Festival, having choreographed over 13 operas, with Festival world premieres including Odyssey, Wilde Tales, and Robin Hood. Additional world premieres include The Lion, Unicorn and Me at Washington National Opera (Kennedy Center), Artus-Excalibur at theTheatre St. Gallen, and Princess in XSBN China. For more information, visit ericseanfogel.com.

S. Katy Tucker is a video and projection designer based in Brooklyn, NY. Her work in theater and opera has been seen around the world, including at the Dutch National, LA, Metropolitan, and San Francisco Operas; Sydney Opera House, Carnegie Hall, Kennedy Center, BAM, Park Avenue Armory; New York City Ballet; and LA Phil, among others. She has collaborated with composers and musicians like Paul McCartney, John Zorn, Jeffrey Zeigler, Amanda Gookin, Helga Davis, and Paola Prestini. Her artwork has been seen at The Corcoran Museum, Artists’ Space, The Dillon Gallery, Brookfield Place, and The Kitchen. Upcoming projects include the Ring Cycle at San Francisco Opera, La Ciociara at Teatro Lirico di Cagliari, and The Flying Dutchman at Atlanta Opera. For more information, visit skatytucker.com.

About MetLiveArts
The critically acclaimed performance series at The Metropolitan Museum of Art commissions and presents contemporary performance through the lens of the Museum’s exhibitions and gallery spaces. MetLiveArts invites artists, performers, curators, and thought-leaders to create groundbreaking new work, including live and digital performances, as well as site-specific durational performances that have been named some of the most “memorable” and “best of” performances in New York City by the New York Times, New Yorker, and Broadway World.