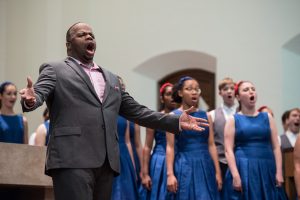 The Young People’s Chorus of New York City (YPC) and Artistic Director and Founder Francisco J. Núñez will be the special guests of American baritone Lester Lynch in a concert of hymns and spirituals celebrating Black History Month at the Christ Church in New York City on Thursday, February 2 at 7:30 p.m.

Christ Church is located at 524 Park Avenue at East 60th Street. The concert is free and open to the public.  Donations are welcome and will benefit Sing for Hope, an organization that brings the arts to underserved communities.

YPC will join Mr. Lynch in several traditional favorites, such as My Lord What a Morning, He’s Got the Whole World in His Hands, Didn’t My Lord Deliver, and Kumbaya.  These songs and more are performed by Mr. Lynch on his new solo album “On My Journey Now,” which was released by Pentatone earlier this month.

Lester Lynch, whose rich baritone and charismatic portrayals have won him recognition in many of the world’s leading opera houses, as well as on the concert stage, has said, “These songs have had a profound effect on American history, and it is my hope that they will spark the light of freedom anew for every listener.”

The Young People’s Chorus of New York City, the award-winning multicultural chorus founded in 1988 by Artistic Director Francisco J. Núñez, is widely known for its superb virtuosity and brilliant showmanship.  This past summer YPC performed with Mr. Lynch for the first time at a Festival Napa Valley concert, winning a standing ovation. Gospel and spiritual music have always been an integral part of YPC’s repertoire on albums and in its worldwide concert programs.  Last season YPC won first prize in the new Gospel category of the 2015 Golden Gate International Choral Competition.

Program to feature hymns and spirituals including:

The concert is free and open to the public with a suggested donation to Sing for Hope.