YPC AND THE SAN FRANCISCO GIRLS CHORUS IN CONCERT 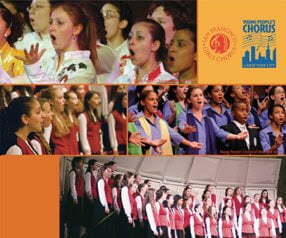 “Two Mountain Songs draws on texts collected by Peruvian writer and folklorist, Jose Maria Arguedas (1911 – 1969). These texts were preserved from anonymous poetry by the Quechua mountain people, the descendants of the Incas, for whom Arguedas advocated passionately all through his life. Lyrical and rich in metaphor, the texts have always stirred my imagination for ways to evoke Andean vocal practices within a western choral practice; and in Two Mountain Songs, my ideas find expression in the inherent beauty of younger voices.” -Gabriela Lena Frank

“Since 1965, I have been composing music for the voice as an instrument. I’ve always believed that the voice itself is a language, which speaks more eloquently than words. But when my friend Carla Blank, who co-directed the children’s dance troupe of Roberts + Blank Dance Theatre asked me to create music composed to children’s poetry, I became intrigued by the idea of setting music to text. Carla gave me a book of poems entitled Electric Chocolate written by her daughter, Tennessee Reed (whose father is the author Ishmael Reed). I chose ‘Three Heavens and Hells’, written when Tennessee was 11, because it gave me space to work with my own rhythms and phonemes as well as an intriguing set of images to play with. I thought the poem was both whimsical and profound. For example, what would ‘Things heaven and hell’ be like? I just let my imagination fly.

“Though I originally scored ‘Three Heavens and Hells’ for four female voices, I always wanted it to be sung by a children’s chorus. When the Young People’s Chorus of New York City commissioned me to write a piece, I was excited by the idea of making a new form with the material. Working with Francisco Núñez and the young singers has given me the opportunity to create different colors and textures, expand my original conception and develop it into a new entity.” -Meredith Monk

Commissioned by the Stephen Petronio Dance Company for YPC

“’One Day Tells Its Tale To Another’ is the closing section of an hour-long dance piece I composed for Stephen Petronio and his company. While the dance piece as a whole deals with Extreme Weather, the text for the 8th section (presented tonight) is loosely adapted from the Anglican liturgy for the dedication of a bell-tower. Before electric lights, oftentimes church bells provided similar comfort and guidance for sailors and civilians. The text and music both end with a benevolent shimmer, on the words, ‘One day tells its tale to another, and one night imparts knowledge to another. Although they have no words or language, and their voices are not heard, Their sound has gone out into all lands, and their message to the ends of the world.’” -Nico Muhly

“In 2005, Mrs. Akiyoshi was asked to compose a piece of music commemorating the 60th Anniversary of the unfortunate day in the city of Hiroshima. At first, she refused to write the music, because she associated Hiroshima with memories of war and unhappiness, not Jazz music. But when she was looking through a photo book of Hiroshima, she found a picture of a young girl coming out of an underground shelter, smiling. The girl was happy to see the sun after many days. Mrs. Akiyoshi found ‘hope’ in the young girl’s face. She changed her mind and decided to write the music.

“‘Hiroshima’ has three parts, and the last one is named ‘Hope.’ The words were written by a famous Japanese poet, Mr. Shuntaro Tanigawa, who wrote a beautiful poem about young people flying to the future with hope.

“The piece was premiered in a 2006 concert in Tokyo celebrating Mrs. Akiyoshi’s 60th anniversary as an artist, and was sung by her daughter, Monday Michiru. When I heard this piece in Tokyo, I thought of how wonderful it would be as a choral piece for the YPC children. I asked Mrs. Akiyoshi if this would be a possibility, and she willingly gave permission for it to be changed to a choral piece. Francisco arranged ‘Hope’ into a beautiful choral piece.

“Mrs. Akiyoshi is well respected and known throughout Japan, so I am very happy that the YPC children will sing this song during YPC’s Japan tour this summer.” -Hiroko Onoyama