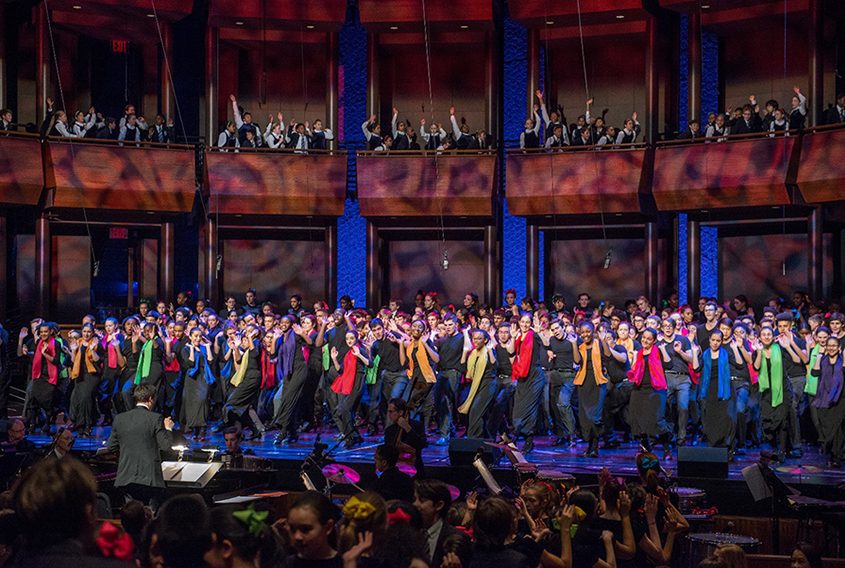 On Monday evening, March 6, at 7 p.m. with every seat in Jazz at Lincoln Center’s Rose Theater occupied, Artistic Director Francisco J. Núñez gave the downbeat that signaled the Young People’s Chorus of New York City to sing “Be Our Guest.” One by one they danced out and kept coming, their voices growing stronger and louder, until the stage and the boxes above were filled with 425 choristers welcoming their guests to the most spectacular and successful gala in YPC’s 29-year  history.


But that was just a sample of what was to come. The chorus members from 8 to 18 were joined by Hamilton’s Mandy Gonzalez, Spring Awakening’s Alexandra Socha, and the extraordinary Time for Three ensemble, in one vibrant production number after the next, heightened by the extraordinary choreography of Jacquelyn Bird. It was a 90-minute, nonstop virtuoso mix ranging from Gershwin, Cole Porter, and Leonard Bernstein to a Monkey Chant from Bali, concluding with all 425 choristers on stage, in the boxes, and in the aisles in a super high-energy performance of “Anything Goes.” The evening’s guests could not contain themselves. Audience members exclaimed:  “Sublime!” “Magical!” “Electric!”

The concert was followed immediately by dinner in the Ballroom of the Mandarin Oriental, a festive celebration of the evening’s honorees: Dusty Philip from Goldman Sachs, two of whose children are YPC chorus members, and George Nemeth, a founding member of the YPC Board of Trustees.

Proceeds from the March 6 gala evening benefit 1,600 children of all cultural and economic backgrounds, not only musically, but also academically and socially through YPC’s after-school and in-school programs. The children come to YPC from every corner of New York City and beyond, 87 percent of whom participate in YPC programs free of charge, and 100 percent of its graduates go on to higher education with help from YPC’s College Bound program.

View more photos from the Gala on our Facebook page >