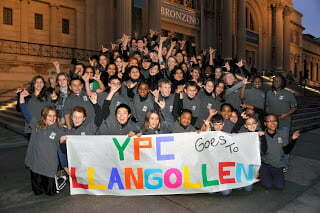 Tomorrow 57 members of the Young People’s Chorus of New York City™ will travel to the United Kingdom to make their Welsh debut at the prestigious Llangollen International Musical Eisteddfod, a six day festival of music, song and dance that incorporates the Choir of the World competition. The YPC, led by associate conductor Elizabeth Núñez, will compete in the Junior Children’s Chorus, Senior Children’s Chorus and Folk Showcase categories.

YPC will fly to London, and spend a few days in the city sight-seeing and rehearsing in preparation for the competition. The choristers have been rehearsing for many months on their music and choreography (created by the ever-talented Jacquie Bird), and have spent the last few weeks in intense rehearsals working very hard and for many many hours! Yesterday they performed a concert of their Wales repertoire for parents, friends, and members of the Concert Chorus and Young Men who will be traveling with YPC to Japan this year. It was great to have a chance to perform for the audience, and gave the choristers a chance to see what really clicks already, and what will need some fine tuning in the upcoming rehearsals before they compete.

I think it goes without saying that the highlight of the concert was their program for the Folk Showcase category. The audience went crazy when they broke into their urban dance, and the chorus had great energy and spirit. Even in the tiny space they had for a stage at the church, they totally made it work. I can’t wait to see them in competition!

And stay tuned for daily updates from the UK by the choristers, and we’ll also post pictures of our adventures!