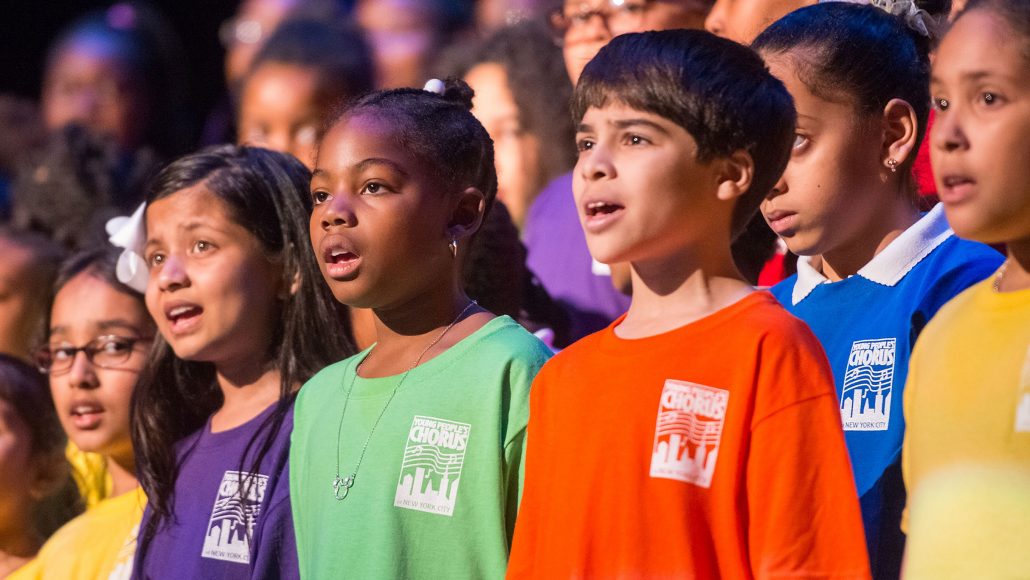 NEW YORK, NEW YORK (May 5, 2018) — Over 1,000 elementary and middle school children of the Young People’s Chorus of New York City’s (YPC) School Choruses music education and performance program will gather at Harlem’s world-famous Apollo Theater (253 West 125th St.) on Thursday, May 17, at 10:45 a.m. for an exciting musical showcase entitled “Red Light, Green Light.”  The children, who hail from neighborhood schools throughout the Bronx, Brooklyn, Queens and Manhattan, will take to the stage of Harlem’s historic landmark theater for a program that recalls the sounds familiar to every child who grows up in New York City:  the childhood chants, rhymes, and pop song mashups, together with the dance steps that go along.

A highlight of this program will be “Red Light, Green Light, the title song composed just for this occasion by Francisco J. Núñez, YPC artistic director and founder and Musical America’s 2018 Educator of the Year. Set to the pulse of the city, it fuses hip hop and Latin rhythms with vocal patter from songs like Miss Mary Mack; Pizza, Pizza; and Down, Down Baby, capturing the excitement that children feel when they are free to be themselves.

The concert, led by YPC conductors under the direction of YPC Associate Artistic Director Elizabeth Núñez, will be enhanced with interludes by artists from The Classical Theatre of Harlem, the renowned 21st century theater company led by Ty Jones, and Elisa Monte Dance, led by Artistic Director Tiffany Rea-Fisher, which for 36 years has been bridging barriers through the universal language of dance.

The Young People’s Chorus of New York City, founded in 1988 by MacArthur Fellow Francisco J. Núñez on a mission of diversity and artistic excellence, harnesses the power of music to fulfill the potential of children musically, academically, and socially.  Over the past 30 years, the program has heightened an awareness of the ability of young people to rise to unforeseen levels of artistry.  Under the leadership of Mr. Núñez and Elizabeth Núñez, over 1,700 children from 8 to 18 participate in this internationally renowned program, which has been recognized with a National Arts and Humanities Youth Program Award, America’s highest honor for youth programs.  www.ypc.org