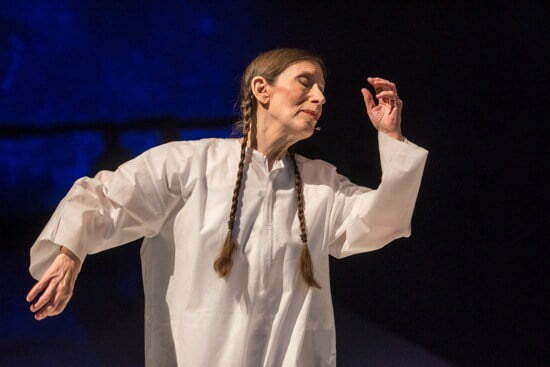 When I began to search the Brooklyn Academy of Music’s website for images of Meredith Monk’s Cellular Songs, I went astray. I couldn’t categorize the work the way the site expected me to. If I clicked on “theater,” I couldn’t also click on “music.” When, with help, I found the photographs I sought, “theater,” “music,” and “dance” were all highlighted. It figures. If you look through the list of works that Monk has made since 1964, you’ll find, say, her 1969 Juice billed as a “Theater Cantata,” her 1976 Quarry characterized as “An opera.” the 1996 The Politics of Quiet as “A Music Theater Oratorio,” and most of her later works as “musical compositions.” But overlapping and weaving and bumping together and fading in and out of her compositions, these categories founder as absolutes.

Monk has long been thinking about the world and its seemingly irreconcilable differences. On a cellular level, there is more cooperation, even when renegade forces threaten to disrupt the status within a single human being. In this shimmering new piece, her themes are (as they have often been) companionship, cooperation, understanding. The performers are all women—not just the four singers (Ellen Fisher, Katie Geissinger, Allison Sniffen, and Jo Stewart)—but the ten members of the Young People’s Chorus of New York City, who don’t appear onstage until close to the end of the performance.

Young People’s Chorus of New York City to be Featured on ‘Andrew Lloyd...
Scroll to top