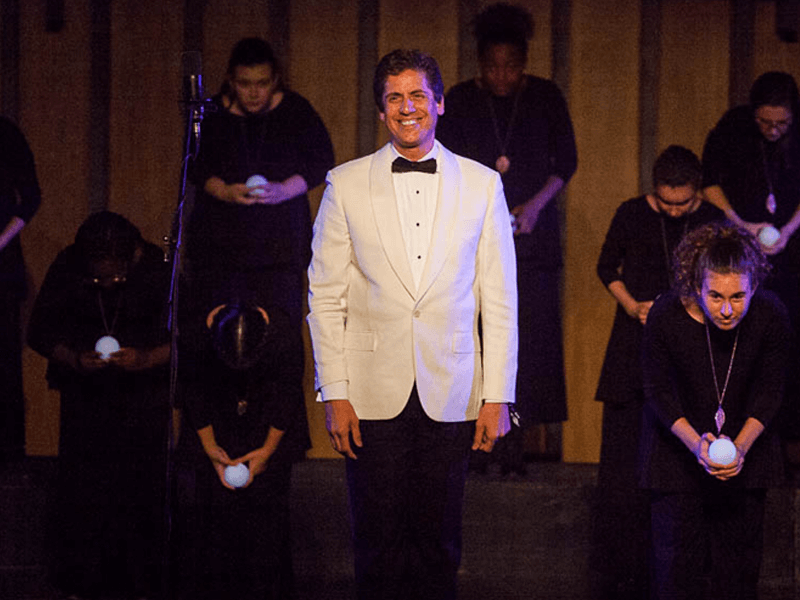 “Natalie Merchant has lent her name and voice to the causes of environmental protection, domestic violence, racism, arts education and more, and Francisco Núñez has enriched the lives of thousands of children of every cultural and economic background with innovative music education,” said The ASCAP Foundation President Paul Williams. “Their passion and commitment to philanthropy are sterling examples of how the creative community can step forward to improve the human condition. They ‘walk the walk’ and are inspirations for all of us.”

Known for her solo career and as the lead vocalist and lyricist of the band 10,000 Maniacs, Natalie Merchant has supported a variety of non-profit organizations both financially and by raising public awareness. They include Scenic Hudson, Riverkeeper, The Center for Constitutional Rights, Doctors Without Borders, Tibet House, Greenpeace, The Southern Center for Human Rights and Planned Parenthood. In 2007, she was appointed to serve a five-year term on the prestigious New York State Council on the Arts (NYSCA) and in 2013, spearheaded an effort to stop the advance of hydraulic fracturing in New York State with a concert film, Dear Governor Cuomo.That same year she again used the format of concert film to address the domestic violence crisis in the Hudson Valley with Shelter. Merchant is currently an artist in residence with the Hudson Valley charity Commission on Economic Opportunity, where she is developing a music, poetry and dance curriculum for their Head Start program.

Over her 30-year music career, Merchant has earned a place among America’s most respected recording artists as an accomplished songwriter and captivating stage performer. She released two platinum and four gold records with 10,000 Maniacs between 1981 and 1993 and as a solo artist, her 1995 debut Tigerlily sold over 5 million copies. In the years since, she has continued to release solo material including a 2010 double album, Leave Your Sleep (Nonesuch Records), a musical adaptation of 26 classic and contemporary poems on childhood by such poets as Robert Louis Stevenson, e.e. cummings and Mother Goose which later received the New York Public Library’s prestigious Library Lion Award. Most recently, Nonesuch released a 10-CD box set of her complete solo work with the addition of a new album entitled Butterfly (2017).

The Life in Music Award is presented by The ASCAP Foundation to an ASCAP writer member for his or her outstanding accomplishments as a composer, songwriter, performer, arranger or vocalist in any genre. Previous award winners include Johnny Cash and June Carter Cash, groundbreaking jazz composer and bandleader Maria Schneider, acclaimed choral music composer Morten Lauridsen, songwriter, musician and activistJesse Winchesterand jazz pianist, composer and arranger Horace Silver.

Francisco Núñez is a composer, conductor and visionary – a leading figure in music education and the artistic director/founder of the Young People’s Chorus of New York City (YPC). Since founding YPC in 1988, Núñez has created an awareness of the ability of children to rise to unforeseen artistic heights and has been praised by The New York Times for “raising the bar [for children’s choruses] by commissioning a steady stream of works from composers who usually write for adults.”

As a composer, Núñez creates countless works and arrangements in all musical formats and styles for choirs, orchestras and solo instruments and is currently composing a song cycle commissioned by The ASCAP Foundation. He also leads the University Glee Club of New York City, its fifth conductor since the all-men’s chorus was established in 1894. Núñez is sought after nationwide as a guest conductor by professional orchestras and choirs and as a keynote speaker on the role of music in achieving equality and diversity among children in today’s society. Among his many awards and honors are a MacArthur Fellowship, Musical America’s 2018 Educator of the Year award, and ASCAP’s Victor Herbert Award. He also holds honorary Doctor of Music degrees from both Ithaca College and Gettysburg College.

In addition to celebrating music creators who have excelled at their craft, The ASCAP Foundation Honorsshowcases the contributions the Foundation makes to nurturing new talent by recognizing its 2019 high school and college scholarship and award recipients. The evening will also feature performances by rising talent in various musical genres.

About The ASCAP Foundation

Founded in 1975, The ASCAP Foundation is a charitable organization dedicated to supporting American music creators and encouraging their development through music education and talent development programs. Included in these are songwriting workshops, grants, scholarships, awards, recognition and community outreach programs for songwriters, composers and lyricists. The ASCAP Foundation is supported by contributions from ASCAP members and from music lovers throughout the United States. www.ascapfoundation.org