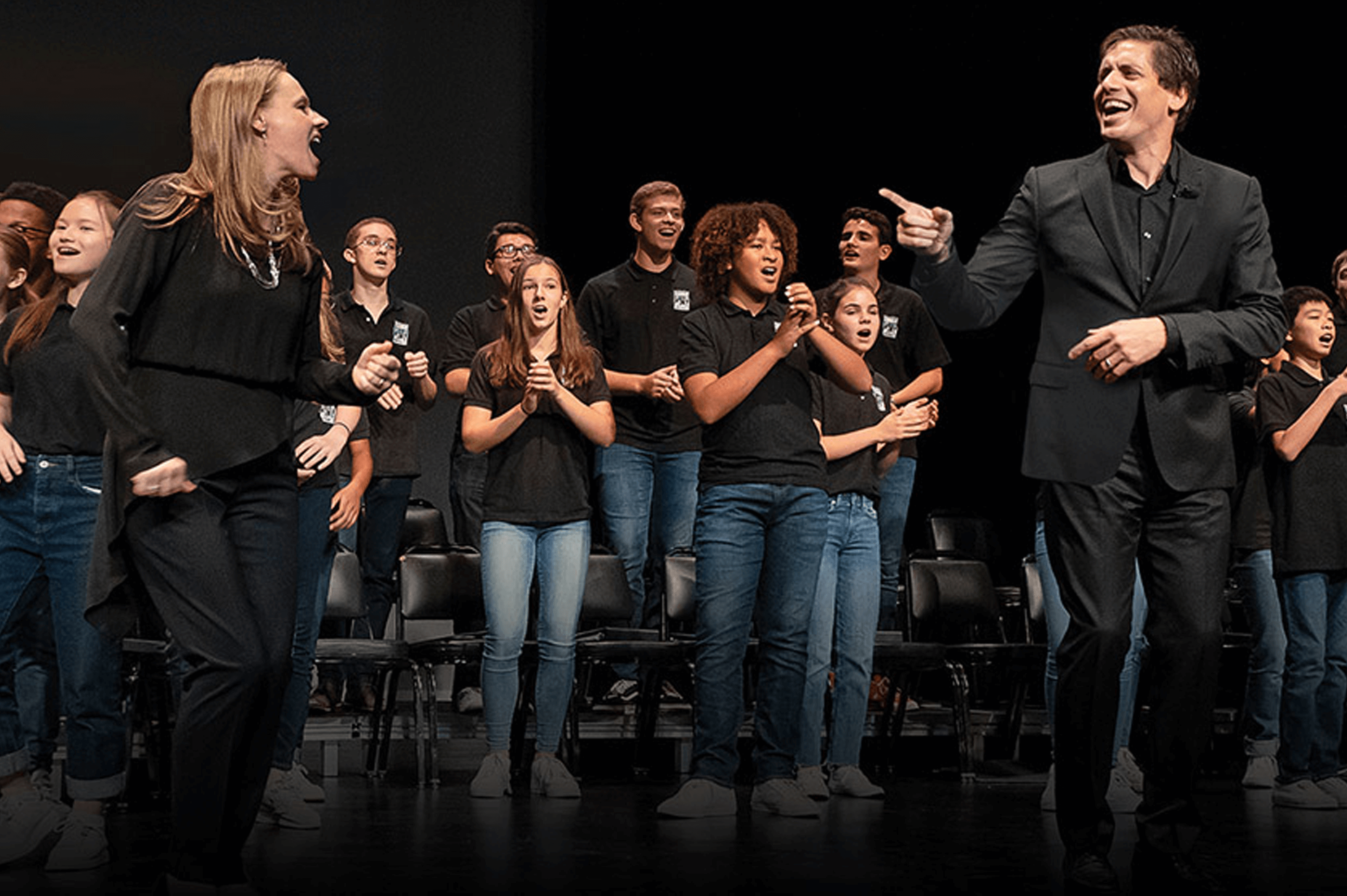 NEW YORK, NEW YORK (September 27, 2019) — The YPC Big Sing is back and excited to unite the New York City community…and beyond…all coming together through the power of song. Join the Young People’s Chorus of New York City at the Gerald W. Lynch Theater on Saturday, October 19, at 3 p.m. to be a part of a joyous 600-voice choir of anyone who loves to sing—people of all ages, side by side—harmonizing both the incredible music of our city and our connections to each other.

Leading the singalong will be YPC Artistic Director Francisco J. Núñez and Associate Artistic Director Elizabeth Núñez, along with special guests Carnegie Hall’s Nick Demeris, renowned for creating human-instrument orchestras, and Midtown, a brilliant quartet from the barbershop and a cappella world. With the lyrics projected onstage, the conductors will lead the audience, while YPC choristers guide audience members in singing the musical harmonies.

Nick Demeris is a writer, actor, composer, rapper, and professional renegade, who gives original workshops on five continents—such as “Hip hop and Shakespeare” or “Beatboxing to Bach”—that foster a culture of trust, generosity and collaboration. The two-time TEDx veteran is also a facilitator of community building, often turning audiences into orchestras through human-instrument workshops. In his fourth year as a singer, creator, and teaching artist at Carnegie Hall, Nick works with master musicians, teachers, aspiring artists, and young people in the juvenile justice system to improvise, write, produce, and record original music.

Midtown, formed only last year, has quickly become a shooting star in the barbershop and a cappella world, quickly rising to the top of the heap with a slew of national and international performances and competition successes.  Singing in a variety of genres, such as barbershop, contemporary a cappella, jazz, gospel, and musical theater, the Midtown members—tenor Nick Gordon, lead Anthony Fortino, baritone KJ McAleesejergins, and bass Christian O’Neill Diaz— are eager to share their music and bring a new flavor of four-part harmony to the masses.

Young People’s Chorus of New York City is a multicultural youth chorus internationally renowned for its superb virtuosity and brilliant showmanship. Founded in1988 by Artistic Director Francisco J. Núñez, over the past 31 years,the program has heightened an awareness of the ability of young people to rise to unforeseen artistic heights. Over 2,000 children from 8 to 18 of any cultural or economic background participate annually in this acclaimed program, which has been recognized with America’s highest honor for youth programs, a National Arts and Humanities Youth Program Award.

Francisco J. Núñez, a MacArthur Fellow and Musical America’s 2018 Educator of the Year, is a composer, conductor, visionary, leading figure in music education, and the artistic director/founder of the Young People’s Chorus of New York City(YPC). Since he founded YPC in 1988, he has established recognition among composers of the child’s voice as a significant instrument for making music. Mr. Núñez has received an ASCAP Victor Herbert Award and the New York Choral Society’s Choral Excellence Award. NYU Steinhardt presented him with its Distinguished Alumnus Achievement Award, and he holds an honorary Doctor of Music degree from Ithaca College.

Elizabeth Núñez is the Associate Artistic Director of the Young People’s Chorus of New York City, as well as the Founding Artistic Director of SoHarmoniums, an intergenerational New York-based women’s community chorus.  At YPC she directs choristers from 8 to 18 in rehearsals, performances, and tours on four continents, and oversees YPC’s School Choruses program, which brings YPC’s unique music curriculum into 20 NYC schools. She has led YPC choristers in Lincoln Center’s White Light and Mostly Mozart Festivals and to numerous gold medals in international choral competitions, including the title of “Choir of the World” in 2018.