Bang on a Can and the Jewish Museum Present the Young People’s Chorus of New York City in Leonard Cohen: A Crack in Everything 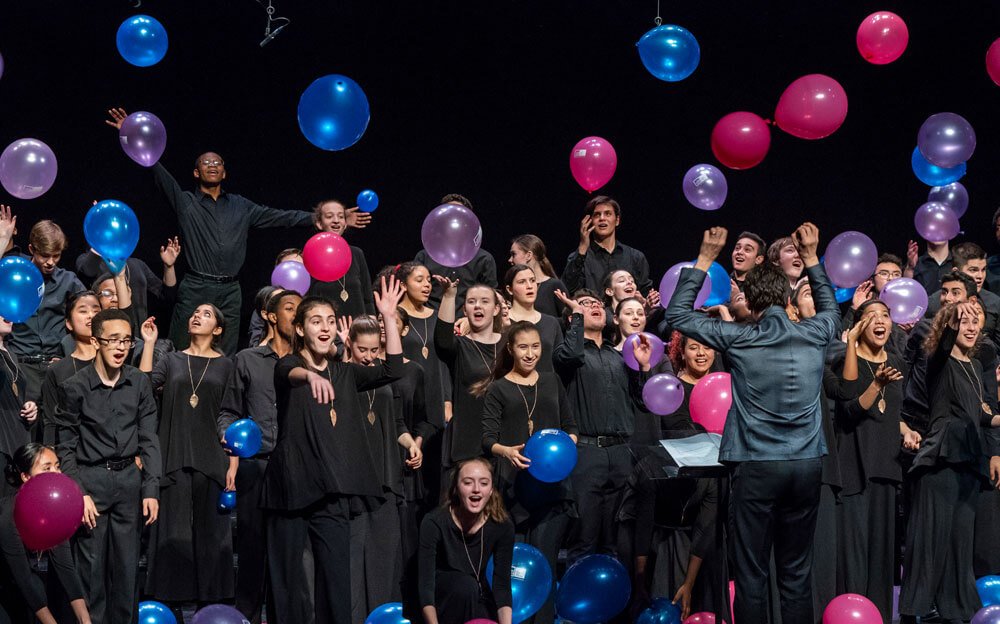 Available at www.thejewishmuseum.org. Includes museum admission.
“…astounding virtuosity and palpable joy… only a heart of stone could have remained unmoved.”

New York, NY – Bang on a Can and the Jewish Museum’s 2019-2020 concert season, pairing innovative music with the Museum’s exhibitions, begins on Thursday, July 11, 2019 at 7:30pm. The Young People’s Chorus of New York City (YPC), founded and directed by Francisco J. Núñez, perform a concert that will include songs and poems by Leonard Cohen and others, coinciding with the Jewish Museum’s exhibition, Leonard Cohen: A Crack in Everything. Recognized throughout New York City and internationally as one of the leading and most diverse children’s choirs, YPC is a longtime and frequent collaborator with Bang on a Can. The chorus has forged a unique presence in the city’s music community both as a champion commissioner and performer of new works by today’s leading composers and for its innovative vocal arrangements that consistently cross all musical borders.

Leonard Cohen: A Crack in Everything, a contemporary art exhibition inspired by the themes of Leonard Cohen’s life and work, is the first exhibition entirely devoted to the imagination and legacy of the influential singer/songwriter, man of letters, and global icon from Montréal, Canada. The exhibition includes commissioned works by a range of international artists who have been inspired by Cohen’s life and work, a video projection showcasing Cohen’s own drawings, and an innovative multimedia gallery where visitors can hear covers of Cohen’s songs by musicians such as Lou Doillon; Feist; Moby; and The National with Sufjan Stevens, Ragnar Kjartansson, and Richard Reed Parry, among others.

The 2019-2020 season marks the sixth year of the Jewish Museum and Bang on a Can’s partnership, producing dynamic musical performances inspired by the Museum’s diverse slate of exhibitions.Additional concerts this coming season include: Theo Bleckmann: “Hello Earth” – the music of Kate Bush (November 14, 2019 at 7:30pm); Nicole Mitchell(February TBC); and Carla Kihlstedt (May 21, 2019 at 7:30pm).

The Young People’s Chorus of New York City (YPC) is a multicultural youth chorus internationally renowned for its superb virtuosity and brilliant showmanship. Founded over 30 years ago in 1988 by Artistic Director Francisco J. Núñez, a MacArthur Fellow, YPC has created an awareness among composers of the child’s voice as a significant, but often untapped, instrument for making music. Through the years, YPC expanded and invigorated the repertoire for young voices with well over 100 premieres and commissions from today’s most distinguished composers, including its composer-in-residence Michael Gordon. YPC’s acclaimed artistry inspires invitations for collaborations and performances from a global array of festivals, cultural institutions, and cities on four continents. YPC was the first American chorus to win first prize in the 54-year history of the European Broadcasting Union’s Let the Peoples Sing choral competition, the first youth chorus to open Lincoln Center’s venerable Mostly Mozart Festival, and the only North American chorus to be named “Choir of the World” in the 34-year history of the International Choral Kathaumixw Competition in British Columbia. Recently, YPC was honored to be invited by Julia Wolfe to join the New York Philharmonic in the world premiere performances of her acclaimed Fire in My Mouth. Each year over 2,000 New York City children benefit musically, academically, and socially through their participation in YPC’s after-school and in-school programs. Today, YPC is reaching hundreds more outside of the city through its YPC National program in New Jersey, Texas, Georgia, and the Dominican Republic. Among YPC’s many awards is America’s highest honor for youth programs, a National Arts and Humanities Youth Program Award.

Francisco J. Núñez, a MacArthur Fellow and Musical America’s 2018 Educator of the Year, is a composer, conductor, visionary, leading figure in music education, and the artistic director/founder of the Young People’s Chorus of New York City (YPC). Since he founded YPC in 1988, Mr. Núñez has heightened an awareness of the ability of children to rise to unforeseen levels of artistry. Mr. Núñez also leads the University Glee Club of New York City, its fifth conductor since the all-men’s chorus was established in 1894. He is sought after nationwide as a guest conductor by professional orchestras and choirs, as a master teacher, and a frequent keynote speaker as a leading authority on the role of music in achieving equality and diversity for children in today’s society. Mr. Núñez composes countless compositions and arrangements in all musical formats and styles for choirs, orchestras, and solo instruments and has received an ASCAP Victor Herbert Award, the New York Choral Society’s Choral Excellence Award, and Bang on a Can’s Visionary Award. Musical America Worldwide named him among 30 “Influencers” for his contributions to the music industry, NYU Steinhardt honored him with its Distinguished Alumnus Achievement Award; and he holds Honorary Doctor of Music degrees from both Ithaca College and Gettysburg College.

Tickets for the July 11, 2019 program are $20 general public; $16 students and seniors; and $12 for Jewish Museum members and Bang on a Can list members, and include exhibition admission prior to the performance. Further program and ticket information is available by calling 212.423.3337 or at TheJewishMuseum.org/calendar. The Jewish Museum is located at Fifth Avenue and 92nd Street, NYC.

About Bang on a Can

Bang on a Can is dedicated to making music new. Since its first Marathon concert in 1987, Bang on a Can has been creating an international community dedicated to innovative music, wherever it is found. With adventurous programs, it commissions new composers, performs, presents, and records new work, develops new audiences, and educates the musicians of the future. Bang on a Can is building a world in which powerful new musical ideas flow freely across all genres and borders. Bang on a Can plays “a central role in fostering a new kind of audience that doesn’t concern itself with boundaries. If music is made with originality and integrity, these listeners will come.” (The New York Times)

Bang on a Can has grown from a one-day New York-based Marathon concert (on Mother’s Day in 1987 in a SoHo art gallery) to a multi-faceted performing arts organization with a broad range of year-round international activities. “When we started Bang on a Can, we never imagined that our 12-hour marathon festival of mostly unknown music would morph into a giant international organization dedicated to the support of experimental music, wherever we would find it,” write Bang on a Can Co-Founders Michael Gordon, David Lang and Julia Wolfe. “But it has, and we are so gratified to be still hard at work, all these years later. The reason is really clear to us – we started this organization because we believed that making new music is a utopian act – that people needed to hear this music and they needed to hear it presented in the most persuasive way, with the best players, with the best programs, for the best listeners, in the best context. Our commitment to changing the environment for this music has kept us busy and growing, and we are not done yet.”

Current projects include the new LOUD Weekend at MASS MoCA; The People’s Commissioning Fund, a membership program to commission emerging composers; the Bang on a Can All-Stars, who tour to major festivals and concert venues around the world every year; recording projects; the Bang on a Can Summer Music Festival at MASS MoCA – a professional development program for young composers and performers led by today’s pioneers of experimental music; Asphalt Orchestra, Bang on a Can’s extreme street band that offers mobile performances re-contextualizing unusual music; Found Sound Nation, a new technology-based musical outreach program now partnering with the State Department of the United States of America to create OneBeat, a revolutionary, post-political residency program that uses music to bridge the gulf between young American musicians and young musicians from developing countries; cross-disciplinary collaborations and projects with DJs, visual artists, choreographers, filmmakers and more. Each new program has evolved to answer specific challenges faced by today’s musicians, composers and audiences, in order to make innovative music widely accessible and wildly received. Bang on a Can’s inventive and aggressive approach to programming and presentation has created a large and vibrant international audience made up of people of all ages who are rediscovering the value of contemporary music.

About the Jewish Museum

Located on New York City’s famed Museum Mile, the Jewish Museum is a distinctive hub for art and Jewish culture for people of all backgrounds. Founded in 1904, the Museum was the first institution of its kind in the United States and is one of the oldest Jewish museums in the world. Devoted to exploring art and Jewish culture from ancient to contemporary, the Museum offers intellectually engaging exhibitions and programs, and maintains a unique collection of nearly 30,000 works of art, ceremonial objects, and media reflecting the global Jewish experience over more than 4,000 years.

Admission: $18.00 for adults, $12.00 for senior citizens, $8.00 for students, free for visitors 18 and under and Jewish Museum members. Free on Saturdays and select Jewish holidays.

Information: The public may call 212.423.3200 or visit TheJewishMuseum.org

For the Jewish Museum:
Daniela Stigh or Alex Wittenberg| 212.423.3271 or pressoffice@thejm.org