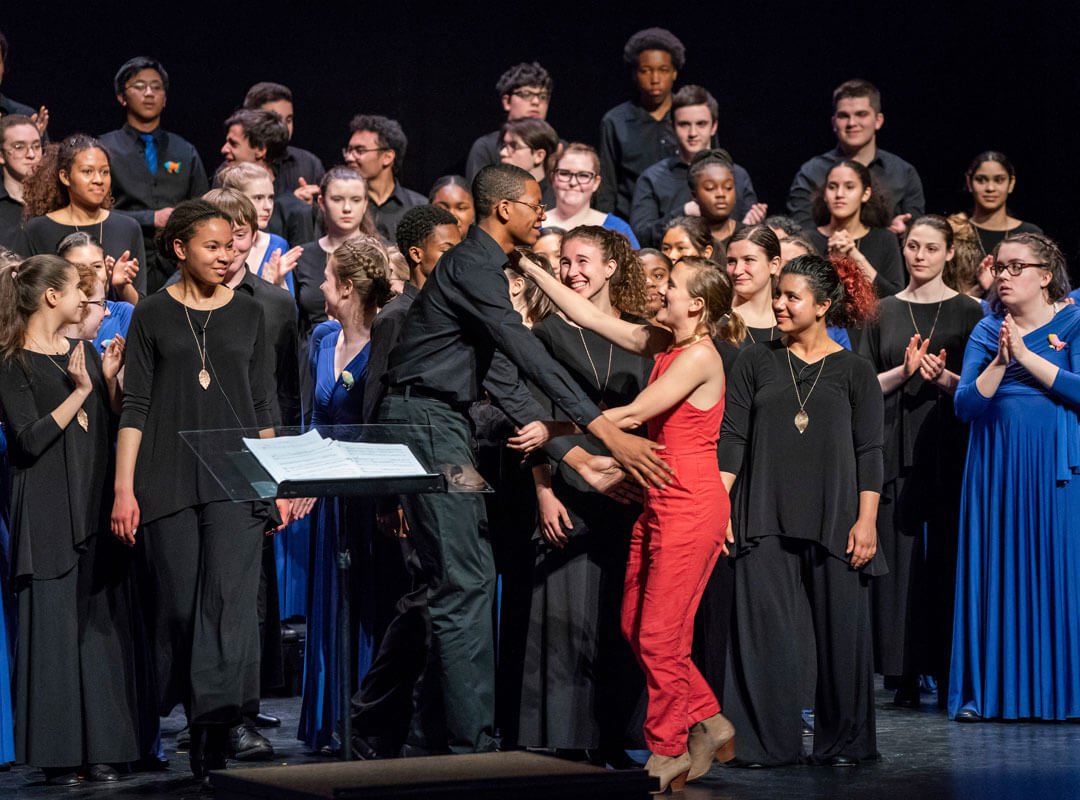 The 2019 Pulitzer-Prize winning composer Ellen Reid celebrates with the Young People’s Chorus of New York City and the Shallaway Youth Choir of Newfoundland at the world premiere of ‘So Much on My Soul.’

“NEW YORK – A concert called ‘Balancing Bubbles,’ at John Jay College on May 19, with the Young People’s Chorus of New York City and the Shallaway Youth Choir, from Newfoundland, was an intriguing surprise. The choirs gave their all for the world premiere of Ellen Reid’s heartfelt So Much on My Soul, led by Francisco J. Núñez with energy and enthusiasm that swept them – and the audience – along…

The two choruses were completing an annual weekend of choral panels and workshops called Vocal Resolutions: Shaping Perceptions Through Music, conceived by the Young People’s Chorus, of which the joint concert was the finale. In both sections, individual choir members came forward to explain what the music means to them.

The two sections were separated by a percussion quartet called Mantra, playing Reid’s earlier Fear/Release. Although there were side drums on the floor, sounds that invited most attention were those from pitched percussion instruments, and the piece had an essentially gentle, sparkling aspect

…Under Núñez, the group’s founder, they sang ambitious selections with mouthfuls of text by Argento, Sondheim, and others. Props also were in evidence here: group bubble-blowing up into the air, and balloons blown up and batted into the audience, which good-naturedly batted them around some more.

Reid’s Pulitzer Prize was for a one-act opera called prism, so she is skilled at setting words. So Much On my Soul came out of talks that Reid had with the singers, about what makes them personally anxious and how they cope with their fears: ‘Waiting on the rain so I can cry and hope no one will notice.’ Soul was commissioned before the prize was awarded, but Reid generously came to this premiere, and hosted a panel before the performance.

Reid’s colorful, charming style is well proportioned for the piece and successfully tailored to this type of voice, with little spikes of dissonance at the second. This is not a contrapuntal piece, but is instead built on attractive harmonies and adventurous part-writing. The six students who had written the poems came forward for a bow. I hope they record the piece so I can listen to it again.

Reid was quoted as saying, ‘It felt important to have cycles and repeating gestures, as the journey to self-acceptance and balance is cyclical and endless.’ I’d say the message was delivered.”

Bang on a Can and the Jewish Museum Present The Young People’s Chorus of New...
Scroll to top