Glimmerglass-commissioned youth operas are inspiring a love of opera among audiences of all ages nationwide. 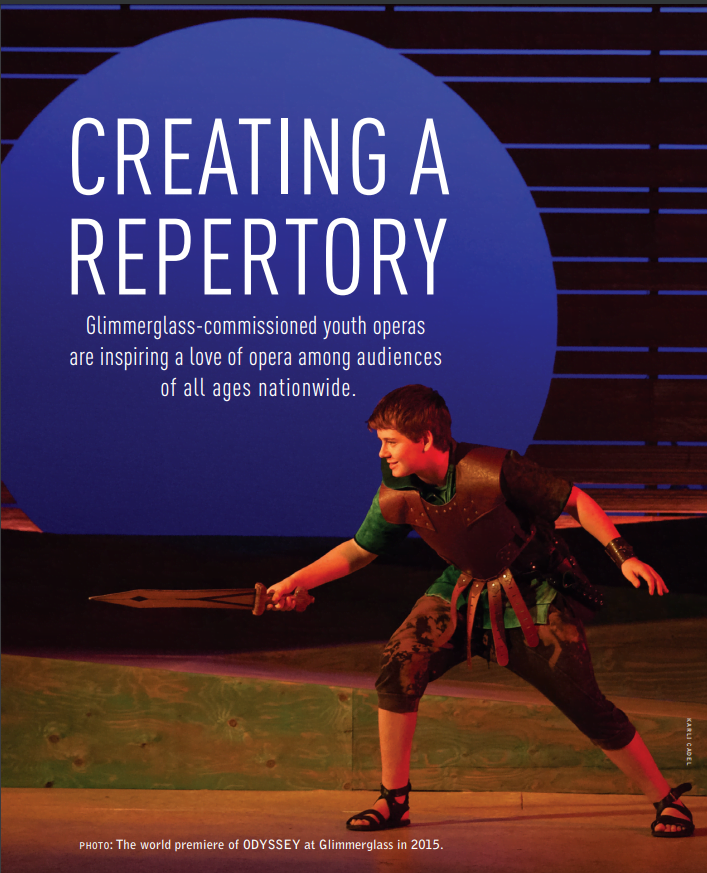 This article originally appeared in the April 2018 issue of Fanfare Magazine, a publication by the Glimmerglass Festival. Click here to view the PDF version of the article with pictures.

“Creating opportunities for people of all ages to engage with opera is so important to me,” says Francesca Zambello. “When I first came to Glimmerglass, I was blown away by the enthusiasm and talent of the Youth Chorus that played a small role in some of our mainstage productions. I thought, these kids need a show of their own.” While there are many “educational” operas written to be performed for young people, there are fewer operas written for young people to perform, and fewer still that appeal to audiences of all ages. “I saw a real need,” says Francesca, “for works that are accessible yet sophisticated, works that could be truly engaging not only for children but also for the adults accompanying them.” Over the past few seasons, the youth operas commissioned and developed by Glimmerglass have been among the hottest tickets on offer, with standing-room-only performances. The reverberations of The Glimmerglass Festival’s commitment to young artists and audiences is now beginning to be felt nationwide. ROBIN HOOD (2017) was produced jointly by Seattle Opera and Seattle Public Theater in February, selling out faster than a rock concert. This past year also saw productions of ODYSSEY at Minnesota Opera and by Young People’s Chorus of New York City (YPC) at The Metropolitan Museum of Art. “It was an extraordinary experience for these young artists to have the opportunity, but even more … the responsibility… to bring the opera’s characters and music to life,” said Francisco Nunez, Artistic Director of YPC. “The YPC singers were so proud to be part of the creation of this exciting, lyrical, and action-packed opera, which I believe, is destined to become a standard in the repertoire for many years to come.”

AN INTRODUCTION TO OPERA

Although YPC members are accustomed to working with living composers, most were completely new to opera. “It was a very new and different experience as a chorus putting on a production that encouraged us to bring out our individuality,” said Dea Elezaj, who played the role of Penelope. “Yet, I’ve never felt closer to my best friends than when practicing and performing ODYSSEY on the Met Museum’s stage. We brought out the best in ourselves and became a more unified ensemble in the process.” Zaccariah Wright (Odysseus), agreed: “As a chorister in YPC, I’ve had the honor of singing the most impressive works in the most breathtaking venues for the most incredible audiences. However, nothing compared to the feeling of taking that final bow in front of the Met Museum crowd.” The Met engaged two former Glimmerglass Young Artists, Meroë Khalia Adeeb and Brian Vu, to play the roles of the Bards, in which they displayed “a winning combination of vibrant, polished vocalism and the easy, knowing sass of cool, older siblings who have read this book before,” according to Opera News. YPC members appreciated the opportunity to engage with such talented and generous professionals: “Meroë and Brian acted as mentors, imparting their knowledge to me and allowing me to realize that music is something I want to do for the rest of my life,” said Naya Griles (Athena). Tenzin Gund-Morrow (Aeolus) noted, “It was good to have the writer of the music there because that made it easy to learn the songs.” The ODYSSEY experience was similarly transformative for the young people of Minnesota’s Youth Opera Project, led by conductor Matt Abernathy. “As a person who started participating in youth opera with minimal acting and singing experience, ODYSSEY proved to be great introduction to vocal performance,” said Willem Villerius (Poseidon). “Its diverse range of amazing music and timeless story line have inspired me to learn more about the world of classical singing.” India Pelster-Wiebe, who animated the Cyclops by means of a shadow play, said, “The music is full of nooks and crannies and little bursts of excitement that make it fun and refreshing to sing every time, and it’s so rewarding to hear everyone around you swell together in harmony, filling the air with song!” In Minnesota Opera’s production, the narrative roles of the Bards were taken by high school students, rather than emerging professionals. Mina Barsness, one of the Bards, said, “The opportunity to learn and perform a role of this caliber has been invaluable to me as a young artist.”

In Seattle, under the leadership of Youth and Family Programs Manager Nicole Sonbert, director Kelly Kitchens, and conductor Meg Stohlmann, members of the 82-person cast were encouraged to engage deeply with the subject matter. “It was so cool to be able to relate the opera’s plot to issues that my generation is facing today and really made me think about how I tackle different situations in my life,” said Izzy Woods, who played the title role in ROBIN HOOD. “I think it’s incredibly important that new works like this continue to be commissioned.” “It’s so important to me that people continue to commission new operas and to have operas be relevant,” agreed John O’Kane (also Robin Hood), “because you can tell such an incredible story through music. You can share a depth of emotion you just can’t share through any other art form…opera has the capability to really change people for the better, whether they are a part of the production or just a spectator.” “I have never been part of a show that was so incredibly significant to the world around me,” said Mia Falcone (Marion). “Living in a world where hate and violence is accepted, you must learn to lead with love. To show kindness. To show acceptance. To build a family of friends. To show how being different makes us the same. To show there is a path to resolution without violent conflict. This modern opera, with its astounding music and applicable content, is leading the charge toward a modern opera renaissance and to a political revolution. As the role of Marion, I played a fierce, sassy, fiery, empowered, battle-ready woman … It was a privilege to play a female character who was comfortable in herself and was willing to take charge. A woman who was respected for her braveness and intelligence. Her boldness was such a beautiful juxtaposition with Robin, that somewhat shy, passive leader, but together they learned to bring peace to their land and their people.” The opera’s characters, which challenged stereotypes at every turn, resonated deeply with the young people of the ensemble, who formed their own “Merry Band,” on and offstage: “Youth opera is one of the few places in my life where I can be accepted for who I am and for my love of music,” noted Madeline Park (Ronnie). “Working on a modern opera allowed us to meet with the composers, Ben Moore and Kelley Rourke, which was an experience that I did not expect to have any time soon and was very special,” said Johanna Mergener (Scarlet). “Hearing their thoughts both on our performances and on their inspiration when writing the opera…gave us an even more personal connection to the work.”

For the 2018 Festival, the company’s first commission, Odyssey (2015), will return to play at Cooperstown High School, the original home of Glimmerglass. Those who were not able to get a ticket to the sold-out first run will have a chance to see the piece for the first time. For those who were lucky enough to witness the company’s first-ever youth opera performances, this production will offer an opportunity to see a new group of young people step into the roles of Penelope, Odysseus, Athena, Poseidon, Circe, and other unforgettable characters from one of the greatest stories of all time. “I have worked on a lot of new operas over the course of my career,” says Francesca, “and it’s always a thrill for me to see a piece go on to have a life after its premiere. It tells me the original team did something right. I’m happy that we are developing a repertory with real staying power, and I look forward to seeing a new group of young people bring their own ideas to Odyssey as part of the 2018 Festival. At the same time, I hope to be able to continue to build the repertory of works for young people. The creation of a work like this requires a significant commitment of time, energy and—let’s face it — cash. So far we’ve been lucky to find some incredibly generous supporters who understand that this is an endeavor that pays enormous dividends. It’s not just about creating new works that are fun to perform and see. It is about creating a new generation of opera lovers and ensuring the future of the art form.”