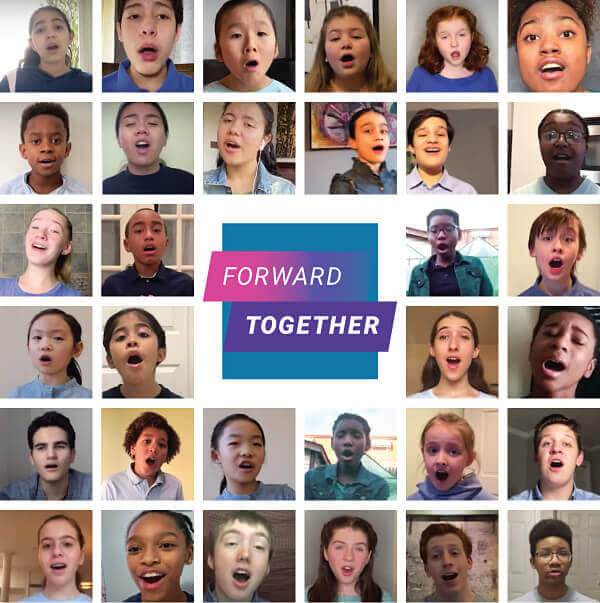 NEW YORK, NEW YORK (May 26, 2020) — On Thursday, June 11, at 7:00 p.m. (EDT) the Young People’s Chorus of New York City under the direction of Artistic Director/Founder Francisco J. Núñez will present a digital spring concert, “FORWARD TOGETHER.” Driven by its commitment to meet where the children are and move forward together to create an authentic and artistic expression, YPC’s annual spring concert will proceed as a special digital viewing event that features favorite works from the season, plus several world premieres.

Among the singular “moments” in this concert are the singers’ recent show-stopping performances with such extraordinary guest artists as Grammy-winning singer-songwriter Jason Mraz; Aneesa Folds from Broadway’s Freestyle Love Supreme; and American soprano Lisa Delan.

The event will also honor YPC’s Class of 2020, celebrating the choristers who are graduating high school, with 100% continuing on to college in the fall.

The event is available to all digital viewing audiences, who are encouraged to support Young People Chorus of New York City with a donation.

Dubbed “one of New York City’s artistic treasures” by Opera News, the Young People’s Chorus of New York City is among the most renowned and preeminent youth choruses in the world, bringing together children of all cultural and economic backgrounds through the power of music. Today, though the children cannot be together physically, YPC continues to support the choristers artistically, academically, socially and emotionally. Among its many awards is America’s highest honor for youth programs, a National Arts and Humanities Youth Program Award. www.ypc.org