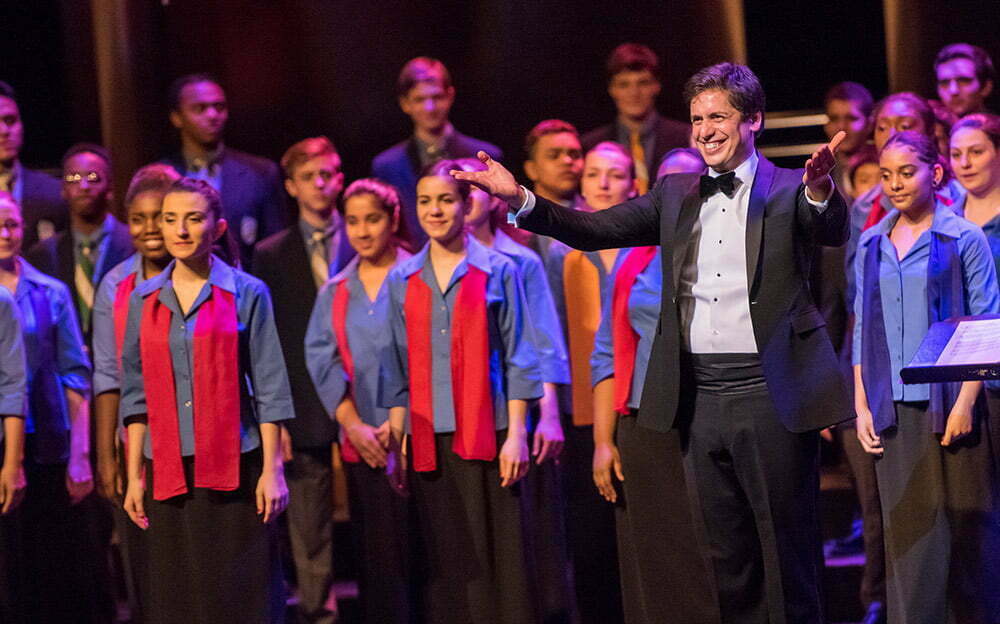 NEW YORK, NEW YORK (March 13, 2019) — Francisco J. Núñez, Founder and Artistic Director of the award-winning Young People’s Chorus of New York City (YPC), announced at last night’s YPC Gala the launch of YPC National, Inc. (YPCN), an independent non-profit organization founded to facilitate the creation and development of YPC-inspired youth choruses nationwide. YPC National helps to develop choruses that, like YPC, bring together children of diverse backgrounds through performance at the highest level, as well as through community and educational initiatives, which together aim to fulfill the potential of every child—musically, academically, and socially.

Not only does YPC National reach children where they live, creating opportunities to sing with a chorus that reflects their city’s distinctive cultural and societal makeup, but the organization also establishes a national network for YPC-inspired choruses, their directors, and their administrators through four key programs: YPC National Lab (presenting national events and programs), YPC National Studio (professional development), YPC National Works (commissioning), and YPC National Gives (granting).

Mr. Núñez first began considering the possibility of a national organization in 2011 after receiving the MacArthur Fellowship, which afforded him the opportunity to further his work to effect positive social change beyond New York City, working and meeting with experts from non-profit arts organizations, youth development groups, and specialists in the fields of music education, the social sciences, and choral conducting.

“After many years of meeting choral directors and other individuals throughout the country who wished to replicate choruses in their own cities based on the YPC model, I realized the importance of expanding YPC initiatives beyond New York,” said Mr. Núñez. “Young people are the strength of our cities, and providing an oasis for children from diverse neighborhoods to work together and learn about each other can make a difference in not only their personal lives, but in building stronger communities through the power of music.”

YPC National’s approach is based on the core values of YPC, which include:

Such values are at the heart of what makes the YPC model successful, and they serve as a guiding philosophy for YPC National’s work with choruses around the country, through which these values are replicated.

YPC National Lab is the organization’s direct link to the children in YPC-inspired choruses around the nation. Through YPCN Lab, YPC National organizes national events and programs in which any YPC-inspired chorus may participate. The first YPCN Lab event is the YPC National Choral Lab, which takes place this summer from July 20 to 27 at Lee University in Cleveland, TN at the edge of the Blue Ridge Mountains. Nearly 100 choristers from YPC and YPC-inspired choruses will come together to train with top instructors, learn new repertoire, bond with fellow choristers from around the country, and rehearse for a short tour that marks the culmination of the week’s activities. The participating choristers will inaugurate YPCN’s national ensemble, YPC Concinamus, which will debut at the Tennessee ACDA State Conference on July 26. Choral Lab participants will be attending from choruses in Tenafly, NJ; Minneapolis, MN; Austin, TX; and the Dominican Republic.

YPC National Studio is a professional development program for staff at YPC-inspired choruses. The program enables conductors, educators, administrative staff, and board members to gain insight into the YPC model by working directly with the YPC and YPC National teams, whether at the YPCN headquarters in New York, on-site at the participants’ YPC-inspired chorus, or at national events and programs. Training can include workshops, clinics, master classes, symposia and artist residencies, with the first sessions taking place at the 2019 National Choral Lab at Lee University. Additionally, training will be offered twice annually in New York, where 3–7 participants can work hands-on with YPC.

Through YPC National Works, the unique sound of YPC’s wide-ranging repertoire, including works from its acclaimed commissioning programs, is shared with YPC-inspired choruses. YPCN Works helps choruses build distinctive programming by sharing YPC commissions with YPC-inspired choruses and by commissioning new works that will be shared through the YPC National network. The first YPCN Works commissions, from Bruce Adolphe and Jim Papoulis, will be premiered at the 2019 National Choral Lab by YPC Concinamus.

YPC National Gives is the philanthropic arm of the organization. YPC-inspired choirs will be invited to apply to YPC National for grants, and the first grantee will be the Young People’s Chorus @ Thurnauer in Tenafly, NJ, which will receive a $10,000 grant.

The launch of YPC National is funded by a five-year, $500,000 grant from The Robert and Mercedes Eichholz Foundation. YPC National’s board is chaired by Adam Chinn, who is also board chairman of YPC. The board of YPC National comprises 16 members from around the country, including Austin, Florida, Minneapolis, New York, and Savannah, as well as from the Dominican Republic. Each YPC-inspired chorus is an independent non-profit organization with its own conductor(s), staff, and board of directors.