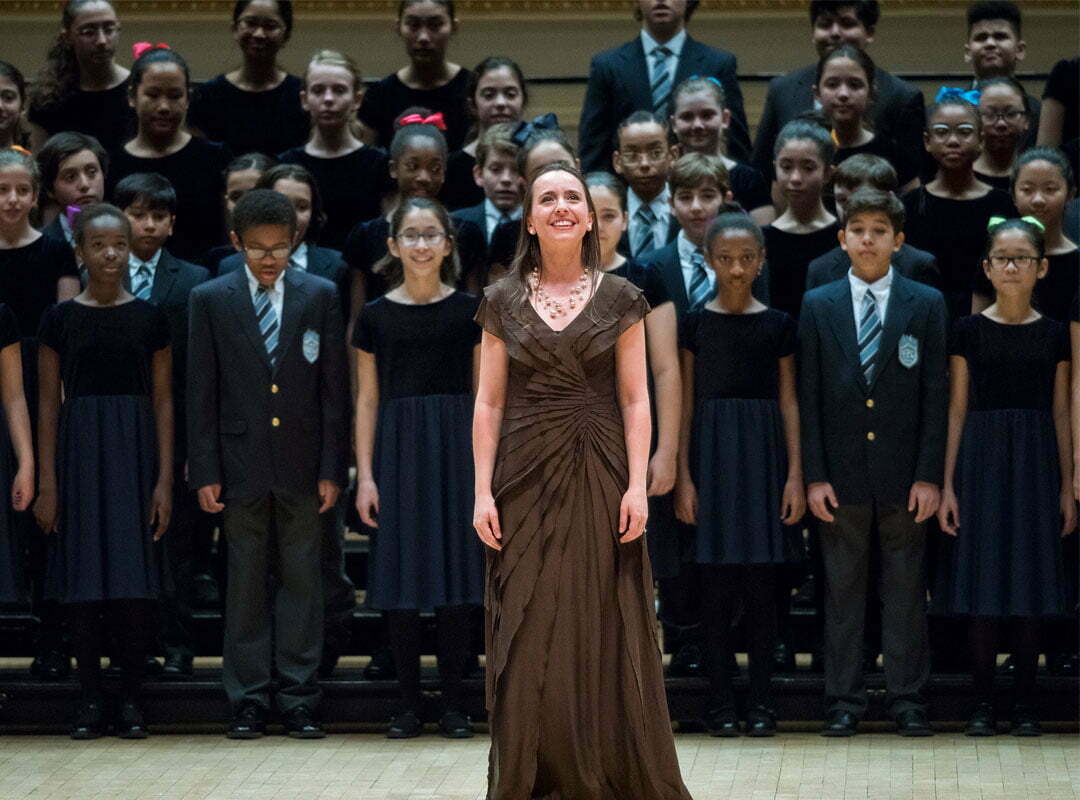 NEW YORK, NEW YORK (February 7,  2019) —Maria Peña, an assistant conductor of the Young People’s Chorus of New York City (YPC), is among five after-school teachers from across the city, to receive a 2019 PASEsetter Award.  They will receive their awards at the PASEsetter Awards Benefit, which takes place from 6 to 9:30 p.m. on Tuesday, February 26, at Cipriani’s 42nd Street.

Each year PASEsetter recognizes individuals who have shown to be committed to providing children with the skills that help them thrive in school and life, academically, socially, emotionally, and physically.  In addition to Maria Peña, the other 2019 PASEsetter Award-winning teachers are Ayinde Alleyne from Bridge to Enter Mathematics (BEAM); Hajnalka Gabris from the Kingsbridge Heights Community Center; Rahson Johnson from Neighbors in Action; and Danielle Madden-Buck from the Police Athletic League.  In addition, Marcia L. Smith, PASE’s recently retired COO and Events Leader, will receive an Honorary PASEsetter Award that evening.

For the past seven years, Maria Peña has been a tireless champion for the children in YPC’s after-school programs, providing high-quality music education and mentorship to children of diverse cultural and socio-economic backgrounds:   guiding them, mentoring them, and preparing them for performances in their own schools and communities, as well as in some of the city’s most prestigious venues, such as Carnegie Hall. Above and beyond her musical teaching skills, Maria develops and maintains close relationships with both the choristers and their families.  The children she teaches understand she is available to them both inside and outside of the rehearsal room in her desire to help break down barriers to their learning, communicating, and performing.

At YPC, Maria is the principal conductor of 130 boys and girls from 10 to 14 in the YPC Intermezzo division, and, moreover, she oversees an additional 130 boys and girls from 8 to 13 in YPC’s two after-school Community Choruses, one in Washington Heights and a second one at Goddard Riverside Community Center on the West Side.  A native of Colombia, Maria is bi-lingual, which is an important advantage in working the Latino children who live in these neighborhoods. Maria holds a Bachelor of Music summa cum laude in Voice Performance from the University of North Florida, and before moving to New York, she conducted at the Jacksonville Children’s Chorus in Florida.

The Partnership for After School Education (PASE) was formed in 1993 to professionalize the after-school community in New York City so that youth-serving professionals could deliver consistent, high-quality programming to young people and meet the fundamental needs of their communities. Over  the past 26 years, PASE has helped over 50,000 dedicated professionals working in after-school programs to gain and develop the skills they need to provide high-quality, content-rich programmatic experiences to youth, both in and out of school time, building a stronger and more resilient after-school field.  Over one million children have been impacted by PASE-trained after-school professionals, a number that continues to grow.

Young People’s Chorus of New York City (YPC), founded in 1988 by MacArthur Fellow Francisco J. Núñez on a mission of diversity and artistic excellence, harnesses the power of music to fulfill the potential of children musically, academically, and socially.  Almost 2,000 children from 8 to 18 of any cultural or economic background participate annually in YPC’s after-school and in-school programs, and through the years, the program has heightened an awareness of the ability of young people to rise to unforeseen levels of artistry.  YPC holds America’s highest honor for youth programs, a National Arts and Humanities Youth Program Award.

Tickets are available at