“Make no mistake: this group, led by Musical America’s 2018 Educator of the Year, would put many professional ensembles to shame…For those who might think classical music is irrelevant or just flat-out dull, these two choirs proved otherwise. And in the case of YPC, one gazed at the future in hope and awe.” 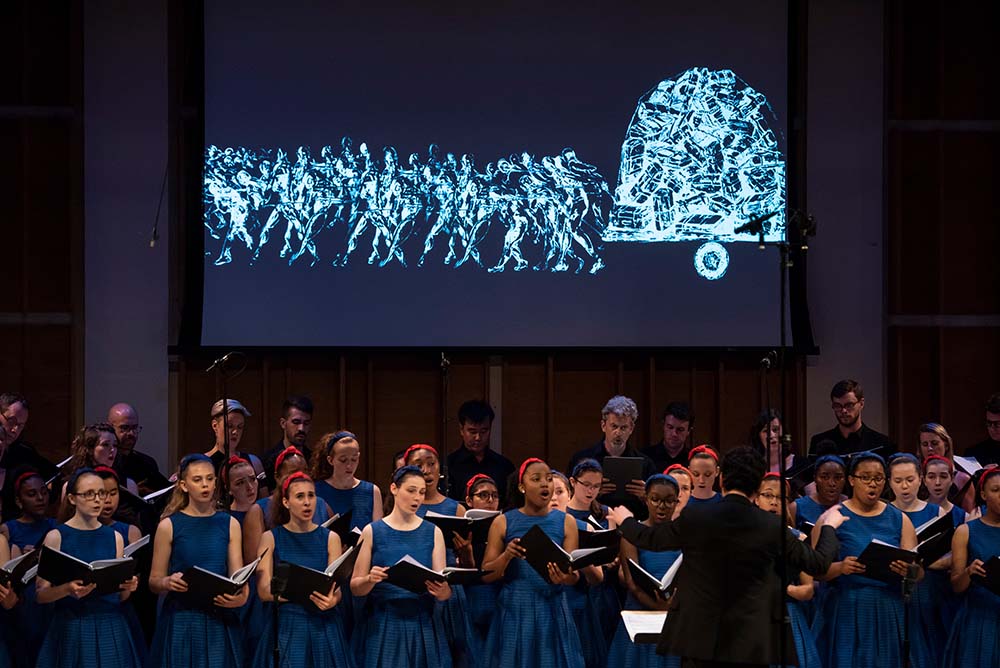 This article originally appeared in Musical America on June 22th 2018.  Click here to view the article on their website.

NEW YORK—Organizers of last Monday night’s concert could hardly have anticipated how very timely their program would be. On June 18 in Merkin Hall, the Young People’s Chorus of New York City (YPC) and the Yale Choral Artists (YCA) offered the New York premiere of The Glass Box, a work that, in the words of its composer Paola Prestini, “follows the illness of young refugees in Sweden who fall into a coma-like sleep when their families are slated for deportation, a syndrome known as uppgivenhetssyndrom, or ‘resignation syndrome.’”

With texts by Royce Vavrek (librettist of the Pulitzer-winning opera Angel’s Bone), The Glass Boxwas here accompanied by animated projections—both pre-recorded and created on the spot—by Kevork Mourad. Prestini’s effects include humming and whistling, with luminous chords underpinning gentle cascades of recitative. As a mother and daughter are reunited at the end, a repeated, unresolved chord adds a note of unease. Jeffrey Douma, founding director of YCA (a fully professional ensemble, comprised of singers from all over the U.S.), led the combined choruses with assurance and sensitivity.

Also timely was Arthur O’Farrill’s Borderless, heard in its world premiere, which was “inspired by the idea that citizenship is not a national reality,” says O’Farrill, that “our home is the earth and we are one people.” O’Farrill, during an amusing, self-deprecating introduction, emphasized common humanity: “We all have spleens.”

With texts by Eric Gamalinda and Louisa Muhr, the piece uses a short, ascending motif, like a question, coupled with syllables from languages around the world—ancient Greek, Japanese, Hebrew. A white-hot chord at the end underlines the closing lines, “I will keep the light on and wait for you to enter the dream.” Accompanying the YPC was the excellent Haven String Quartet; YPC director Francisco J. Núñez conducted.

Those in the packed hall who didn’t respond to the high quality music making in these two fascinating premieres (not many, judging from the ovations) might have been moved by the ebullient high spirits of a West Side Story medley put together for YPC by Matt Podd, or by David Lang’s thoughtful the national anthems from the Yale Choral Artists.

In the former, easily one of the night’s high points, the nearly 80 young men and women not only sang (without a conductor but with pianist Jon Holden) but danced, and quite admirably. Navigating a relatively small stage, they charged back and forth in rows while singing “America” and clearly enunciating Stephen Sondheim’s tricky lyrics.

The rest of the YPC portion included Núñez’s Forever Is My Song (2011) with its pointed message, “We will not disappear, we will always be here.” Its jubilation is capped with an impossibly radiant final chord, which the singers delivered with ardor and precision. Make no mistake: this group, led by Musical America’s 2018 Educator of the Year, would put many professional ensembles to shame.

A violinist walking down the aisle to the stage introduced “Who But I?” from Daniel Brewbaker’sOut of the Mist, Above the Real (An Irish Cantata) (2004), with elaborately choreographed hand motions—beckoning, welcoming. Immediately after came Pekka Kostiainen’s Satakieli (1989), which completed the two works’ touching, folk tune-tinged immediacy.

Núñez led the choir (and the audience) in Michael Gordon’s To Sing (2017, commissioned by YPC) with its simple repetitions of phrases separated by rests: “Everybody/Has the right to sing/This song.” Its ingenious structure starts with one section of the chorus echoing another, and then a fugue begins, and as the volume increases, the piece ends with an infectious, anthemic stomp.

Lang created the national anthems (2014, co-commissioned by YCA) from the common words that appear in the dozens of national anthems he analyzed. From his website: “Hiding in every national anthem is the recognition that we are insecure about our freedoms, that freedom is fragile, and delicate, and easy to lose.” Completed six years after his popular the little match girl passion(2008), anthems shares its minimal phrases that begin simply, often in unison, but then blossom into polyphony. After four years of working with this piece, the Yale singers—combined with the Haven Quartet and Douma’s expertise—seemed completely inside Lang’s spare elegance.

The evening ended with the two groups joining forces for Dominick DiOrio’s You Do Not Walk Alone (2014), a sober, if ultimately uplifting paean, with a message of hope that was hard to resist. (DiOrio directs the new music ensemble NOTUS at the University of Indiana.) And then to bring down the house came You Can’t Judge a Book By Its Cover by Willie Dixon, in a joyful arrangement by Núñez, who broke out a tambourine and encouraged the audience to join in with rhythmic clapping.

For those who might think classical music is irrelevant or just flat-out dull, these two choirs proved otherwise. And in the case of YPC, one gazed at the future in hope and awe.

The Young People’s Chorus of New York City will appear at the Mostly Mozart Festival on July 17 and 18 in Bernstein’s Mass.