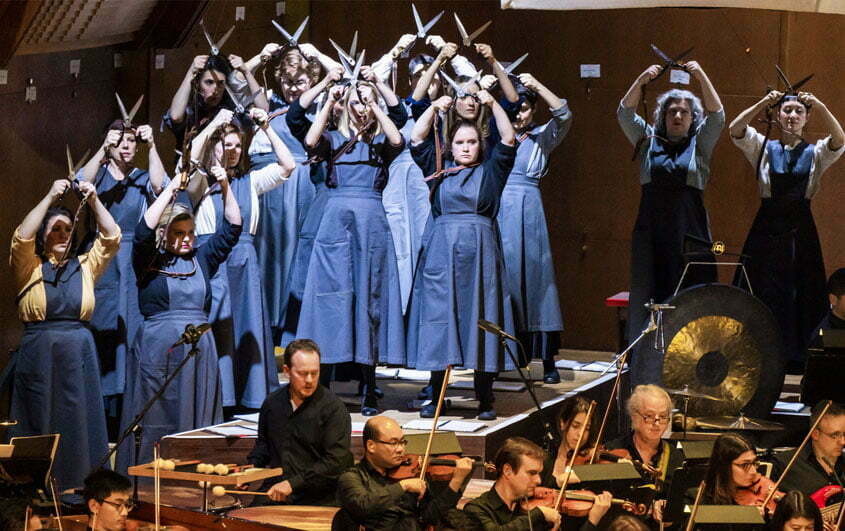 Members of the 146-voice chorus, dressed as garment workers, in composer Julia Wolfe’s Fire In My Mouth, which documents the 1911 Triangle Shirtwaist Factory Fire in New York.

Wolfe won a Pulitzer Prize in 2015 for Anthracite Fields, about Pennsylvania coal miners. Before that, she wrote a piece spotlighting Appalachian workers. Now, her latest look at American labor history, Fire in My Mouth, is being released.

The new album documents one of the most tragic and deadly workplace disasters in American history. And Wolfe’s music — as performed by the New York Philharmonic, the Grammy-winning choir called The Crossing and the Young People’s Chorus of New York City — is among the most arresting and cinematic she’s composed.

On March 25, 1911, the top floors of the Asch building in New York’s Greenwich Village burst into flames. They were home to the Triangle Shirtwaist Company, a sweatshop where immigrants toiled under harsh and crowded conditions. That day, 146 workers died, some of them after jumping from the building. Almost all were women. Fire in My Mouthtraces their stories. Wolfe draws on oral histories, weaves together Italian and Yiddish folk tunes from their homelands and, with clicking percussion and the swoosh of an aeoliphone, depicts the sound of sewing machines buzzing on the factory floor.

The immigrant workers had no rights and no protections. But one who fought to gain those rights was Clara Lemlich, a labor organizer. She suffered broken ribs at the hands of hired thugs during a strike she’d helped coordinate two years before the deadly fire. In her, Wolfe found the title of the piece and a high point in the music. In the section titled “Protest,” the orchestra pulses and swirls around a quote from an interview Lemlich gave — referring to her impassioned public speeches — with the chorus in full cry, singing, “Then I had fire in my mouth.”

Wolfe’s 50-minute oratorio is not all fright and frenzied music. There are many subtle, evocative touches of orchestration and vocalizing. In “Immigration,” the opening section, women on the boat speak of their 10-day journey to America, dreaming of a land without poverty and persecution as the glassy ocean stretches out before them. Double basses drone away as violins, in the highest register, soar motionless like seagulls hovering over the ship.

Wolfe specifies a large chorus — 146 female singers, to be exact. That’s the same as the number of workers who died in the Triangle Shirtwaist Factory fire. The piece closes solemnly, with a recitation of all their names.

A few months after the fire, New York passed important factory-safety laws. Once again, it took a tragedy to force change. But Fire in My Mouthseems to ask: “How much has really changed?” By shining a light on immigrants, their resilience and their broken lives, Julia Wolfe’s powerful oratorio set in 1911 resonates in America today.