The Young People’s Chorus of New York City has a long history of commissioning and premiering important and exciting works for children’s chorus and to date has commissioned and premiered over 100 compositions. YPC’s first commissioned work dates back to 1996 with There Are (No) Children Here by Morton Gould and Phil Galdston. In 2001, Francisco J. Núñez created YPC’s first commissioning series, Transient Glory, and followed it with Radio Radiance in 2009. Through those two series alone, YPC has commissioned and premiered over 80 pieces of new music by many of today’s most distinguished emerging and established composers. These new works have become an integral part of the repertoire not only for YPC, but also for youth choruses worldwide. YPC is not only expanding the repertoire for young voices but is playing a dynamic role in the ever-evolving fabric of music in the 21st century. 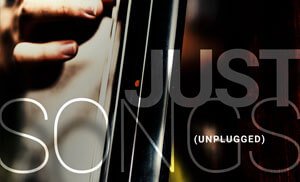 Just Songs (Unplugged), a compilation of acoustic solo works with lyrical themes centered around social issues. The album is part of YPC’s new commissioning program, Just Songs, showcasing original music created by YPC alumni, now emerging songwriters and solo vocalists, as they navigate the unprecedented challenges in today’s world. The Just Songs program, which offers an incubation process, reflects YPC’s goal of continuing to provide choristers and alumni with resources and support as they establish their own successful careers.  The songwriters will serve as role models for the organization’s young choristers while also developing a new breadth of social justice repertoire for the young singers. The artists will work with YPC’s choral members, grades 3-10, to perform Just Songs (Amplified), a set of new choral arrangements of the original songs, at concerts currently being planned for 2021 and on streaming platforms.  Composers and performers for Just Songs (Unplugged) are Blaize Adam, Nia Drummond, Caroline Kuhn, Jordan Reynoso, Nate Sabat, Monica Soyemi, and Nia Soyemi.

YPC Artistic Director Francisco J. Núñez created Transient Glory, YPC’s first commissioning series to encourage today’s most respected composers consider the children’s chorus as a serious and glorious instrument capable of making music of the highest quality during the fleeting period of time when their voices are imbued with a particular poignancy and innocence. Since YPC introduced the series in 2001, dozens of Pulitzer Prize, Oscar, MacArthur, and Guggenheim award-winners, many of whom had never before written for young voices, have accepted commissions to compose for YPC. This “Who’s Who” of composers includes such renowned composers as Charles Wuorinen, Meredith Monk, John Corigliano, Joan Tower, David Del Tredici, and Terry Riley, among dozens more.

Here is a sample of what critics have said:

“Francisco J. Núñez, the chorus’s visionary artistic director, inaugurated [Transient Glory] in 2001. Its title suggests that for a few, fleeting years the voices of well-trained young people have a special sound, a poignant innocence. These qualities came through on Friday when the dedicated members of this multiracial choir brought affecting vocal beauty and impressive skill to six demanding and strikingly different pieces.” –The New York Times

“Transient Glory III offers a glimpse of what makes the Young People’s Chorus such outstanding interpreters: the solid, elegantly controlled and blended sound one would expect from a mature ensemble, combined with the bold and adventurous energy of youth.” –WQXR

“There are plenty of children’s choirs you can dial up if you fancy a bit of Rutter, Chilcott, or perhaps a suite of Folksongs from Around the World. The Young People’s Chorus of New York is not one of them. These kids take their thorny, highly rhythmic contemporary fare straight. And the more ethnically-charged it is, the better they like it….Bravo to the kids.” –American Record Guide

“A disc that has nothing but highlights…so far one of my top picks of the year.” –Audiophile Audition

“This recording represents the cutting edge of the 21st-century youth chorus and the possibilities it embraces. Surely this is a standard for others to emulate.” –American Record Guide

“This is an essential disc for fans of new choral music and for anyone who wants to experience the virtuoso capabilities of one of today’s finest youth choirs.” –Classics Today

“The singing of these gifted young folks simply blew me away! There are many competent and seasoned adult ensembles out there that would be hard-pressed to match this group’s intonation, rhythmic prevision, and enthusiastic confidence in these often very tricky pieces.” –American Record Guide 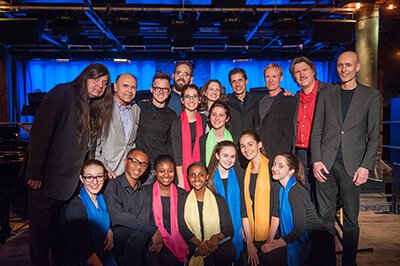 Radio Radiance was created in 2009 by the Young People’s Chorus of New York City to expand the influence of its groundbreaking Transient Glory commissioning series for young voices. The series is designed to excite and challenge the music perceptions of young people with fresh, new musical ideas. Through the Radio Radiance commissions, some of today’s most adventurous composers are redefining ideas of what traditional classical music can sound like by combining new ideas, technology, and the human voice to create new music and new sounds. Through podcasts of this music, young people are able to listen not only in concert halls, but on-the-go, through the kinds of audio technology they use every day: iPods, iPhones, laptops, as well as the time-honored medium of radio.

To further participation and appreciation of this new music, YPC invites a select number of high-level regional choruses across the U.S. mainland and Hawaii to take on the challenge of studying, premiering, and even broadcasting a Radio Radiance work of their choice on their local radio stations, often in collaboration with the composers.

A sampling of what participating choruses are saying:

“I knew the audience would be drawn into this music with its skillful text painting. This was a great opportunity for the students to collaborate with a living composer.”
–Choral Director Wes Singleton – Memorial Varsity Men’s and Women’s Chorus of Edmond Memorial High School, Edmond, OK

Re Radio Radiance commission The City by Susie Ibarra:

“I truly welcomed the offer to participate. For me, the opportunity to talk at length with the composer was the most rewarding part of the experience. A close second was watching the transformation in my choir as they started to conceptually understand the piece, and the rapid way they were able to tie the piece together at the end into a meaningful performance.”
– Director of Academy Choirs Michael Lippert, Punahou Academy, Honolulu, Hawai’i