[Critic’s Pick] Review: With Protest and Fire, an Oratorio Mourns a Tragedy 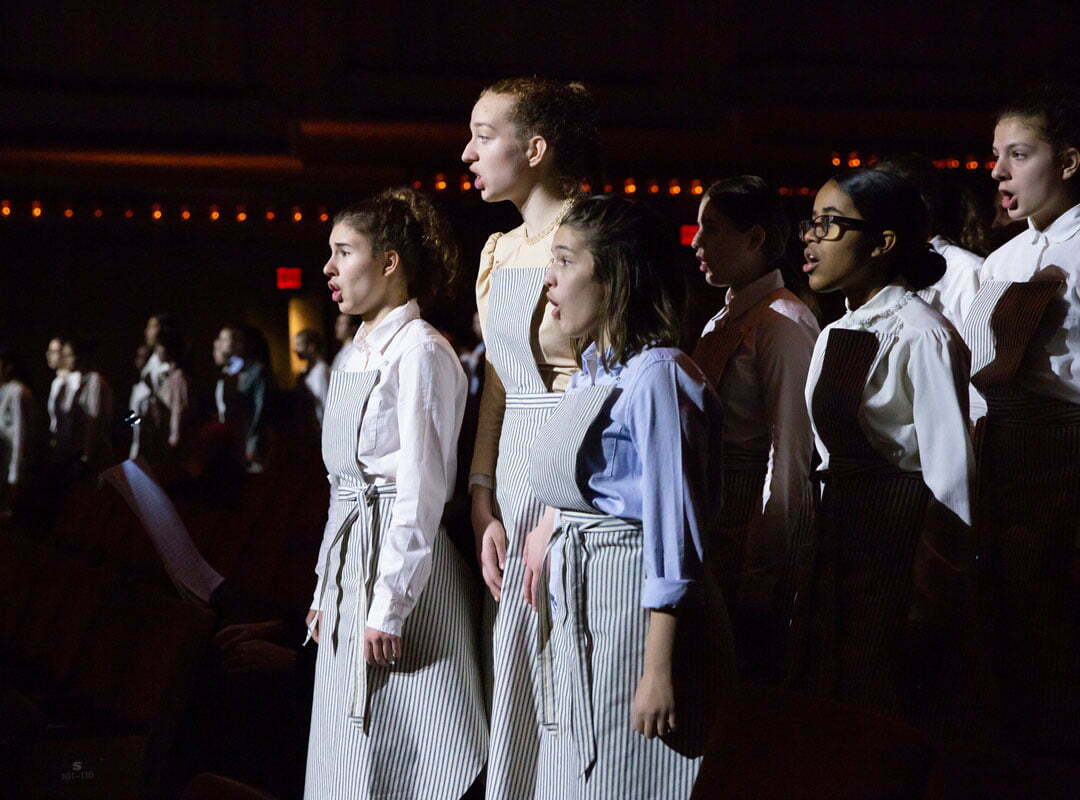 Among the performers were members of the Young People’s Chorus of New York City.
Credit: Caitlin Ochs for The New York Times

“The composer Julia Wolfe’s new multimedia oratorio concerns the 1911 Triangle shirtwaist factory fire. It was a prescient choice of subject. The fire — which took the lives of 146 garment workers, most of them young immigrant women — led to changes in workplace conditions and stirred debate over contentious issues of gender, labor and immigrants’ rights.

But how much progress has been made over the past century? That question hovered over the New York Philharmonic’s premiere of Ms. Wolfe’s ambitious, heartfelt, often compelling ‘Fire in my mouth’ on Thursday, a month into a partial government shutdown driven by bitterness over immigration policy.

Ms. Wolfe took risks in writing this work, conducted by the Philharmonic’s music director, Jaap van Zweden, and directed by Anne Kauffman. (It anchors ‘Threads of Our City,’ a series in Mr. van Zweden’s first season as music director exploring immigration.) How does a composer depict such a horrific story without melodrama? How to underscore the powerful old film footage and photos that this production projected over the orchestra — women dressed in ruffled shirts walking into factories; workers sitting at tables with sewing machines; the rubble of the decimated factory building — without the music coming across as mere soundtrack?

The big things are right in this tautly structured 60-minute piece in four parts: ‘Immigration,’ ‘Factory,’ ‘Protest’ and ‘Fire.’ In an affecting touch, the chorus is made up of 146 women and girls, members of the excellent chamber choir the Crossing (Donald Nally, director) and the impressive Young People’s Chorus of New York City (Francisco J. Núñez, director).

Ms. Wolfe’s choice of choral texts, mostly drawn from oral histories and speeches, shows great sensitivity. In ‘Immigration’ she sets the words of a survivor recalling her trip to America: ‘five of us girls’ taking ‘a big beautiful boat’ that ‘took about 10 days,’ everyone looking ‘to God knows what kind of future.’

There is both heady optimism and a sense of dread in Ms. Wolfe’s music here, whole stretches of which render the words in thick, blocky chords, over an orchestra grounded by droning tones yet run through with fidgety inner details. Often a single word is turned into a battering ram: ‘10, 10, 10,’ or ‘days, days, days.’ Longer choral lines unfold in overlapping phrases, which blend words and choral textures into a haunting muddle.

‘Factory’ begins with percussion evoking the clattering sounds of sewing machines. Most of the workers were Eastern European Jews and southern Italians. So Ms. Wolfe inventively juxtaposes a plaintive Yiddish folk song with a lively Italian tarantella-like piece. The way these songs are embedded in Ms. Wolfe’s agitated, heaving orchestra, they seem like alternative coping mechanisms for the oppressed.

There are stretches in which the music of ‘Fire in my mouth’ assumes its place in the multimedia whole a little too well. I liked it most when Ms. Wolfe went for something musically visceral or extreme, as in the climactic episode of ‘Protest.’ The women’s choir sings relentless phrases espousing the determination of these immigrants to ‘talk like,’ ‘look like’ and ‘sing like’ Americans.

Then the girls’ choir, entering the hall from the aisles, sang a stark passage from a speech by Clara Lemlich, an activist leading a strike. Here, the choral refrains and orchestra layers built into piercing harmonies, like clusters out of Ives or Varèse, yet driven by Ms. Wolfe’s Minimalism-influenced rhythms.

In one of the most gripping moments, the choristers raised actual scissors (specially chosen by Ms. Wolfe) above their heads in an eerie gesture that also added metallic slicing sounds to the musical textures. During the harrowing climax of ‘Fire’ the music turned raw, brassy and blazing, with fractured rhythms, choral plaints that border on screeching, and chanted repetitions: ‘Burn like, burn like, burn.’

Mr. van Zweden led a commanding account of a score that requires close coordination between disparate forces, and which ends with an elegiac final chorus in which the names of all 146 victims are tenderly sung to create a fabric of music and memory.

Another elegy, an instrumental movement from Steven Stucky’s oratorio ‘August 4, 1964,’ about Lyndon B. Johnson, opened the program. Then the Philharmonic’s principal clarinetist, Anthony McGill, was a superb soloist in Copland’s Clarinet Concerto, a piece that begins with a winding, wistful melody that segues into a feisty second movement: in this context, another, brighter side of urban life.”