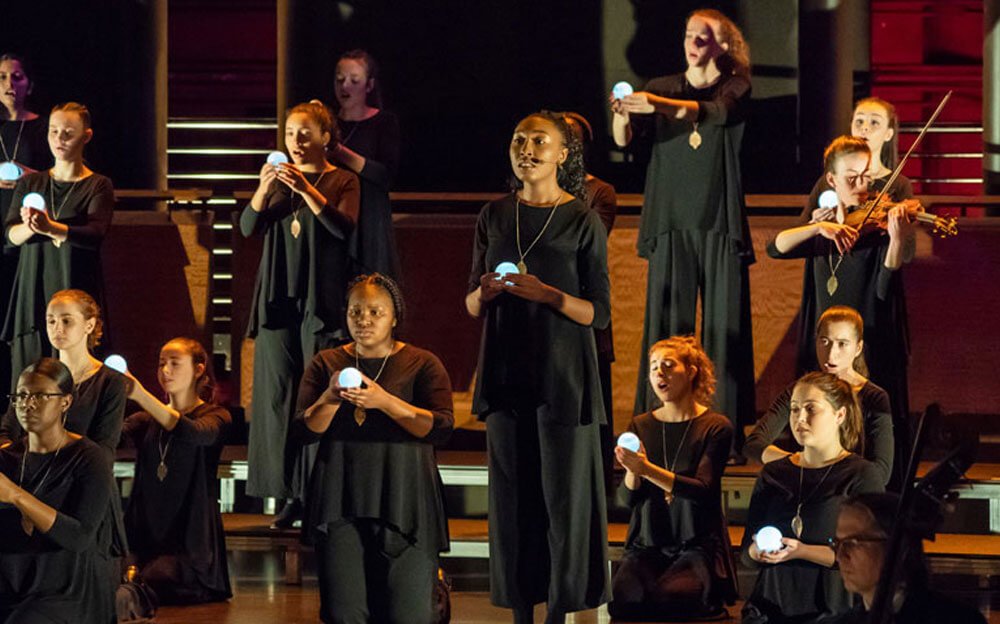 NEW YORK, NEW YORK (April 24, 2019)— On Sunday, May 19, the Young People’s Chorus of New York City (YPC) in partnership with the Shallaway Children’s Choir from Newfoundland presents “Balancing Bubbles,” curated by 2019 Pulitzer Prize-winning composer Ellen Reid and YPC Artistic Director/Founder Francisco J. Núñez on the theme of balance. The 7 p.m. concert, to take place at the Gerald W. Lynch Theater of John Jay College(524 West 59th Street),will be highlighted by the world premiere of Ms. Reid’s So Much on My Soul, a YPC commission, to be premiered by both of the evening’s choruses, which incorporates poetry on the theme by several choristers.

In addition to individual sets by YPC and Shallaway, the program also features Ms. Reid’s percussion work Fear | Releaseperformed by Mantra Percussion, as well as a YPC/Mantra Percussion performance of her cover of The Books’ Take Time –  all related to the concert theme and an example of the scope of her musical ideas.

This concert culminates YPC’s third annual, weekend-long Vocal Resolutions summit, a program that explores issues of social relevance, this year devoted to how today’s young people can achieve balance in their lives despite the many pressures facing them.

Ellen Reid opens the concert with a pre-concert discussion with a small group of choristers about the pressures and expectations facing teenagers today. About working with YPC, Ms. Reid says:

“When Francisco Núñez asked me to write a piece about ‘balance’ for YPC, he was quick to specify that the lyrics for my piece could come from anywhere and that I could interpret the words however I saw fit. After meeting with the YPC musicians, it became clear that the most compelling texts were the choristers’ own personal stories. I worked with a small group of singers who wrote poetry about their journey to self-acceptance, and I excerpted these poems and set them to music. It felt important for the piece to have cycles and repeating gestures, as the journey to self-acceptance and balance is both cyclical and endless.”

“I am very excited about this program. I approached Ellen Reid, a composer I have long admired and whose music touches on many social issues, about creating a new work on the topic of balance and to work with the singers to create lyrics and poems for her new piece, as well as to work with me to curate an entire evening of balance and music. I am especially thrilled with the opportunity to partner with the Shallaway Youth Choir, a marvelous chorus from Newfoundland, whom YPC has visited several times since 2001. Now we are delighted to be hosting them. They are a perfect fit for this concert. Their choristers are among those who are experiencing the huge pressures society is placing on them. In YPC we engage the choristers in ongoing, open dialogues. Lately, the conversations have led to the idea of how to balance and surmount the many personal, social, and academic challenges in their lives as well as the personal challenges of balancing their identities. I feel certain all of our choristers will benefit from this experience.”

Young People’s Chorus of New York City,founded in 1988 by MacArthur Fellow Francisco J. Núñez on a mission of diversity and artistic excellence, harnesses the power of music to fulfill the potential of children musically, academically, and socially.  Through the years, the program has heightened an awareness of the ability of young people to rise to unforeseen heights of artistry. Over 2,000 children from 8 to 18 of any cultural or economic background participate annually in this internationally renowned program, which has been recognized with America’s highest honor for youth programs, a National Arts and Humanities Youth Program Award. For more information, visit ypc.org.

Shallaway Youth Choiris an internationally recognized and acclaimed organization dedicated to exploring, developing, and celebrating cultural expression through choral music. The Shallaway mandate fosters independent musicianship and leadership, empowering young people to become the next generation of active leaders and artistic innovators. Through their commitment to artistic excellence and the preservation of the rich folk culture of Newfoundland and Labrador, the Shallaway choristers learn the value of independence, discipline, and confidence, while also gaining a sense of identity and pride of both their own heritage and as global citizens.At every age, Shallaway fosters opportunities for peer mentorship and leadership though its apprenticeship, advanced placement, and choral scholarship programs.

Committed to honoring the past and expanding the future of percussion music, Mantra Percussionbrings to life new works for percussion by living composers, collaborates with artists from diverse genres and styles, and through evening-length events, engages new audiences by challenging the standard concert format in pursuit of a greater awareness of this under-appreciated genre. Since its founding in 2009, Mantra Percussion has performed throughout North America, Europe and Asia, and in pursuit of a grander artistic vision, has commissioned and premiered over 40 works for percussion ensemble.

Major support for the Vocal Resolutions: Shaping Perceptions through Music Program is provided by The Pierre and Tana Matisse Foundation. Lead Corporate Sponsor for the Great Expectations concert is Travelers. The program is made possible, in part, by public funds from the New York City Department of Cultural Affairs and the New York State Council on the Arts, with the support of Governor Andrew Cuomo and the New York State Legislature.

*“So Much on My Soul” was commissioned by YPC with support from The Adele and John Gray Endowment Fund. Special thanks to The ASCAP Foundation, The Aaron Copland Fund for Music, Alice M. Ditson Fund of Columbia University, and Amphion Foundation for supporting new music commissions and performances, and the Witherspoon Fund of the New York Community Trust for supporting new work by female composers.