YPC program on December 9 pairs Christmas- and Hanukkah-themed works: Benjamin Britten’s A Ceremony of Carols and Samuel Adler’s companion piece, The Flames of Freedom, performed in its New York premiere 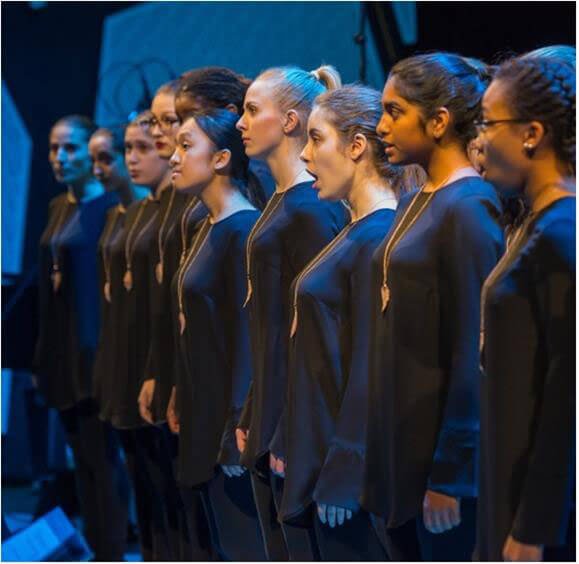 NEW YORK, NEW YORK (November 13,  2018) — The Young People’s Chorus of New York City (YPC) brings together two holiday traditions under the baton of Associate Artistic Director Elizabeth Núñez, who conducts contemporary stagings of Benjamin Britten’s Christmas cantata A Ceremony of Carols and Samuel Adler’s Hanukkah cantata The Flames of Freedom at the Metropolitan Museum of Art on Sunday, December 9 at 3:00 p.m. Heard for the first time in New York City, The Flames of Freedom was composed as a musical counterpart to Britten’s classic, and both works are explored on the program through sets, lighting, and choreography.

This YPC program is one of two performances by the chorus on back-to-back weekends at The Met’s Grace Rainey Rogers Auditorium. On Sunday, December 2 at 3:00 p.m., the chorus performs two settings of poetry by Langston Hughes: Ricky Ian Gordon’s new choral version of Litany and YPC alumna Jessie Montgomery’s Danse Africaine, which was commissioned by the chorus. YPC Founder and Artistic Director Francisco J. Núñez conducts both works as part of A Dream Deferred: Langston Hughes in Song, a program created by the Museum’s 2018–19 Artist-in-Residence, soprano Julia Bullock.

Samuel Adler’s The Flames of Freedom was written for SSA chorus and piano as a musical counterpart to Benjamin Britten’s A Ceremony of Carols, originally scored for SSA chorus and harp. While Britten’s cantata uses a variety of texts related to the Biblical story of Christmas, Mr. Adler’s work is divided into eight movements that correspond to the eight Hanukkah lights. The Flames of Freedom sets Hanukkah texts in Hebrew and English to a mixture of original music and well-known Hanukkah songs and hymns.

“I’m very excited to be leading the first New York performance of The Flames of Freedom, made all the more special by sharing a program with the Britten work that inspired it. We are reimagining these works through themes of light and hope in times of darkness—the miracles around us every day and remembered during the holiday season. To hear the works paired in concert has long been Samuel Adler’s dream, and by bringing together two holiday traditions, the program also reflects YPC’s mission of bridging cultures.”

Commissioned as part of YPC’s Transient Glory new-music series, Jessie Montgomery’s Danse Africaine is a setting of the 1923 poem of the same title by Langston Hughes, one of the leading figures of the Harlem Renaissance. Ms. Montgomery describes the poem, which celebrates African song and dance, as having a natural sense of movement, rhythm, and cadence, which she aimed to mirror in this setting for SSAA youth chorus. The work was premiered by YPC on November 4, 2016 at National Sawdust.

Now celebrating its 30th anniversary, the Young People’s Chorus of New York City is a world-renowned youth chorus founded in 1988 on a mission of diversity, artistic excellence, and education by Artistic Director Francisco J. Núñez, a MacArthur Fellow and Musical America’s 2018 Educator of the Year. Under the leadership of Mr. Núñez and Associate Artistic Director Elizabeth Núñez, the program harnesses the power of music to fulfill the potential of children, heightening an awareness of the ability of children to rise to unforeseen levels of artistry. Almost 2,000 children from ages 8 to 18 participate annually in YPC through its after-school, in-school, and community programs. YPC is a recipient of the National Arts and Humanities Youth Program Award, America’s highest honor for youth programs. For more information, visit ypc.org.

FOR THE MIRACLES: A HOLIDAY CELEBRATION
Sunday, December 9 at 3:00 p.m.
The Metropolitan Museum of Art, Grace Rainey Rogers Auditorium